Today, we’re going to be going over the new crime drama film Naked Singularity 2021 Movie. This movie’s gravitational pull sucks you into a place where nothing exists and you can’t escape.

Naked Singularity 2021 had its world premiere at the San Francisco Film Festival on April 9th, 2021. As of recording, no release date has been announced.

When a successful New York public defender loses his first case, his life begins to unravel. With a cast like that, Ridley Scott Scott Free Productions producing an exciting up-and-coming first-time feature director in Chase Palmer, who helped co-wrote the first hit film and based upon the pen prize-winning debut novel by Sergio de la Pava.

The potential for greatness here was boundless. But within the first 10 minutes or so, I already knew something was off.

We followed public defender Casey, played by the incredible John Boyega, who is absolutely wasted here as he fights for some actual justice in a system that is plagued with issues.

He ends up getting suspended from his job because of a complaint to his supervisor and gets involved with Lea, who has found herself getting out of a conviction by writing to the cops about a drug operation she was involved in. But lay plans on working both sides and in the end run off with all the money and Casi wants it.

There’s also this whole subplot surrounding the big collapse of New York and Casi’s physicist’s neighbor played by Tim Blake Nelson is just rattling on about the gravitational pull of black holes.

But this is so poorly conveyed in the movie that it doesn’t make a lick of sense. And it ultimately feels like Palmer had such a struggle with this content when adapting the source material.

It’s not just John Boyega who is utterly wasted here. It’s pretty much the whole entire cast. There’s not a single character in Naked Singularity  film that you can latch onto or connect with. Their motivations are muddled and backstories nonexistent.

The only actor who seems to actually understand what kind of film he’s supposed to be in is Bill Skarsgard, whose frenetic energy and cynicism seemingly matches up to what Naked Singularity film was trying to capture but ultimately failed.

Linda Lavin as Judge Cymbeline provides the only moments in the film that truly stick their landing. As a woman who has been completely jaded by the system and spars against our naive protagonist.

Honestly, I really don’t want to go into a ridiculous amount of detail about what is off about this film, because I don’t like tearing films apart. I am always an advocate and rooting for films to succeed.

I’m going to talk about one more thing. We have to talk about this film’s complete lack of energy. Which feels completely off because you can tell the director is going for a type of kinetic action-style heist thriller.

I mean, they are alluding to this samurai sword, the whole damn movie, which makes you kind of expect something along the lines of a kill bill-style action sequence.

Spoiler alert, you don’t get one:

The use of the score and sound also laid bare the film’s intentions with pace and momentum. We have a scene in which Olivia Cooke is Alexa, dazedly swinging back and forth in a club scene that is supposed to inject some liveliness into the film dance. Woman What are you doing? Dance.

Later, we have one of the most boring car chase sequences I have seen in years coupled with a vigorous dubstep song bumping in the background.

As an audience, we can clearly see what Palmer was trying to accomplish, but nearly none of it translates to the screen.

So I am going to give  Naked Singularity 2021 Movie an F. 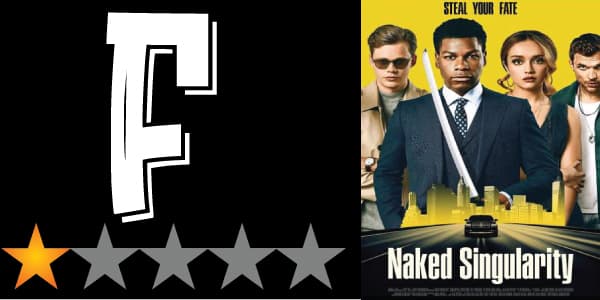 Naked Singularity had all of the right moving parts to create a fantastic film. But in the end, the name says it all.

Guys, thank you so much for reading the review of the Naked Singularity 2021 Movie, and see you next time.