Check out the review of the new American martial arts fantasy film Mortal Kombat 2021. The new Action, Adventure, Fantasy film is out now.

It is a very quick little review of Mortal Kombat 2021 reboot of the videogame franchise.

Josh Lawson, who plays Kano along with Simon McQuoid the director and the producer, introduced the film. They were amazing and they did a meet and greet after the film.

So the basic premise of the film, we start off with an MMA fighter by the name of Cole Young, played by Lewis Tan, who’s accustomed to taking beatings for money but is unaware of his heritage or why Outworld Emperor Shang Tsung, played by Chin Han, has sent his best warriors. Sub-Zero, played by Joe Taslim and otherworldly chromatics to hunt cold down.

So-called fearing for his family’s safety goes in search of Sonya Blade in the direction of Jax. Special Forces major who bears the same strange dragon mocking that Cole was born with.

Shang Tsung finds himself in the Temple of Lord Raiden an Elder God and the protector of the Earth realm who grants sanctuary to those who bear the mocking.

As he prepares to stand with Earth’s greatest champions against the enemies of the world in a high-stakes battle for the universe known as Mortal Kombat.

So, as I said, the previous films exactly hadn’t had the best run. They’ve kind of gone into those categories. It’s so bad, it’s good. And I can safely say that Mortal Kombat 2021 is brilliant. It’s a brilliant interpretation of these beloved characters that mythology and paying respects to that mythology.

When I was watching the film, I can tell the cast, the crew, everyone gave a shit. So much work has been put into this production.

Pans down. The same stela for this film is Josh Lawson as Kano. He’s an Aussie actor and he’s a comedian. He’s been in Anchorman two. But my God, the improv that he does in this film is brilliant.

And like I said, he came in and introduced the film at the premiere on Tuesday evening. He was a top bloke with, stellar performance in the film.

He’s an absolute natural as Kanero And it’s one of those things where you don’t associate Josh Lawson and Kano. And he even acknowledged that on his Instagram the day that his casting was announced and he even touched on it when he introduced the film, he said, I’m the last person that you expect to see in this film as Kano because he’s a goofy Aussie comedian. But, my God, he does pull it off.

Now, we know with a lot of video game films that story plot, story arc, stuff like that doesn’t really matter. But I was pleasantly surprised by how the story was structured and a story arc at the end of the film that took me by surprise. And it really worked and it paid off.

As I said, I won’t go into that certain story arc, but I’ll leave you pleasantly surprised. And it’s quite refreshing to have such a heartwarming story arc in a video game adaptation if that makes sense.

Now, I have only really one gripe with the film, and it’s not even really a gripe. It’s just I wanted to say more. The runtime of this film is an hour fifty and I really think it needs a two and a half hour runtime, maybe two hours. Forty-five.

It did feel a little bit choppy at times. And the only reason why I say that because we’re setting up these characters and then all of a sudden it jumps to a new character or a new scene. And I just felt like that needed a little bit more explaining of setting up this character story arc or the mythology, that background where they come from or what’s to be expected of them.

Again, not really a gripe. It just left me wanting more. I feel like there’s a director’s cut or extended cut somewhere there.

Surely that would have been so much more footage shot, but they might have been a mandate where they had to keep it under a certain time. Well, they just had to wrap things up quickly. But I just felt that these characters, because they’re so beloved and so well renowned, they needed more explaining.

And I really want to say that I want to see where these characters go, because, as I said, everyone gave a shit on this production. You can just tell by the production design, the acting, the way the actors transform their bodies.

Prime example, Mehcad Brooks, who plays Jax in the film. He is an absolute house of a unit in the film. Everyone looked like they train their asses off and really just gave a shit.

So, guys, overall, I had an amazingly fun time with Mortal Kombat 2021. Again, my only gripe is I just wanted to see more.

I felt like it could have been a good solid two and a half hours as opposed to its hour fifty runtimes. But honestly, I’m not going to let that get in the way or cloud my judgment. With this film.

Brilliantly executed, the characters were amazing, the mythologies were respected. The production design is beautiful, the costumes are beautiful.

And I obviously forgot to mention the Gore factor. This film is rated R 18+ in Australia. That usually equates to an NC 17 in the States.

When we write something R rating plus we mean fucking business and it is so warranted. It is rather gory and bloody. This film, it’s brilliant. It’s one of those things where the goal would happen on screen.

In that case, when I don’t know what to do it myself, I just burst out laughing. I’m like, oh my God.

But yet the gore is absolutely beautifully executed and it’s mortal combat man. You kind of mortal combat without going just the way it goes. So that being said, 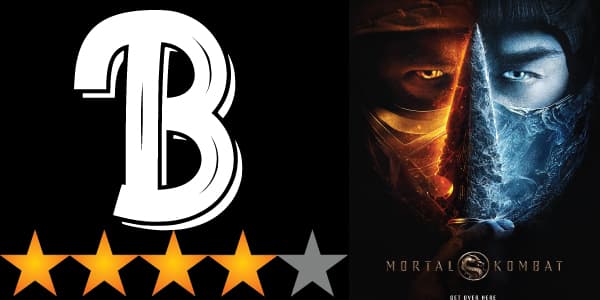 So guys, drop a comment below and let me know your thoughts. Once you’ve seen mortal combat, was it everything you expected? Tell me, what was your favorite character? Do you want to see more of this rebooted world that has been created?

Guys, thank you so much, as always, for reading Mortal Kombat 2021 review.  See you next time.

Check out the trailer of the new Action, Adventure, Fantasy film, Mortal Kombat 2021.