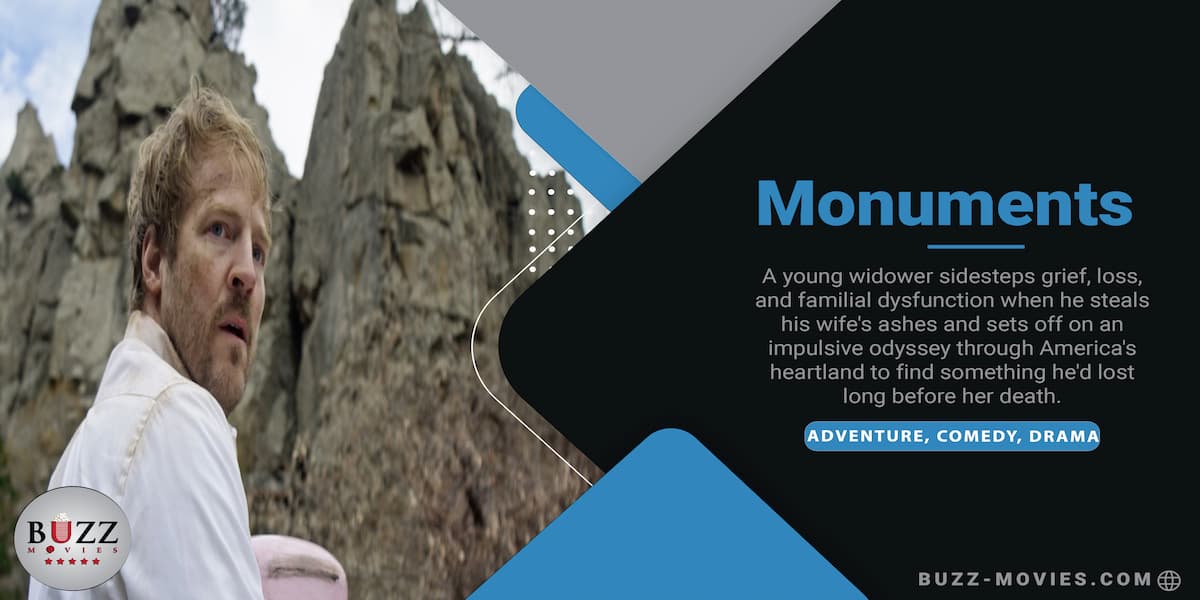 Monuments Movie 2021 is a quirky Comedy Indie film. It’s rated PG13 and is an hour and 34 minutes.

The film tells the story of Ted Daniels (Sullivan), a young widower sidesteps grief, loss, and familial dysfunction when he steals his wife’s ashes and sets off on an impulsive odyssey through America’s heartland to find something he’d lost long before her death.

So there were a lot of things that I really liked about this movie. First of all, David Sullivan plays the perfect everyday man. He does a really great job, and it’s really entertaining to watch.

Marguerite Moreau a lovely spark, and she plays the role of the wife who has died. We see her both alive and in the afterlife.

Other cast members include Joel Murray, who’s a fan favorite, Paulina Olszynski, Rivkah Reyes, and David Pasquesi. Now, that’s just among the larger cast. But those were some standouts.

Another standout scene in the entire movie is this dancing in the bar. I thought it was really fun and unexpected, and it was really the first time that I was like, Oh, okay.

So when the movie starts off, you’re kind of like, okay, what’s going on? And then it sort of just seems odd. And then this dance scene is just full-on random and quirky.

And then that’s when I kind of settled in my seat and was like, okay, I’m just along for this ride it’s crazy and funny and bizarre and insightful all at the same time.

There are also some odd music choices that just made the movie. I thought even more quirky and random. It feels realistic in an oddball kind of way.

Let’s talk about the things I didn’t like about the movie. First of all, there are flashbacks that blend with the widower seeing his wife again, making the timeline a little bit confusing at times for some viewers.

Some of the scenes are just totally bizarre. And you’re like, What was the point of that scene? But think longer and harder when there is a random scene. And ask yourself, How does that tie in to the message that the director is trying to share? And how did that artistically or visually tie into those lessons and themes?

The movie itself is very slow-moving, and some people may not appreciate that.

This movie is somehow boring for some people. I think you’ll see the corner of a bed shaking with some sound effects that imply some hanky pinking is going on.

But I appreciate the fact that I didn’t have to see naked people going at it. It’s just unnecessary. You can tell what’s happening. There’s a lot of alcohol in this movie. There’s talk of death, and there is some profanity.

So some positive themes that the movie illustrated. Well, our marriage appreciating and living life learning to let go, death, of course, taking risks and control.

So I am going to give Monuments movie a C-Plus. 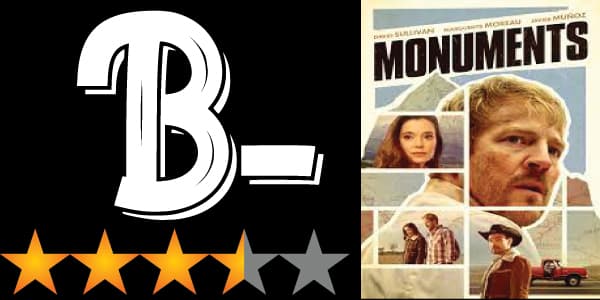 Guys thank you so much as always for reading the review of Monuments movie 2020. See you next tim.

Check out the trailer of the new adventure, comedy, drama film “Monuments Movie”.