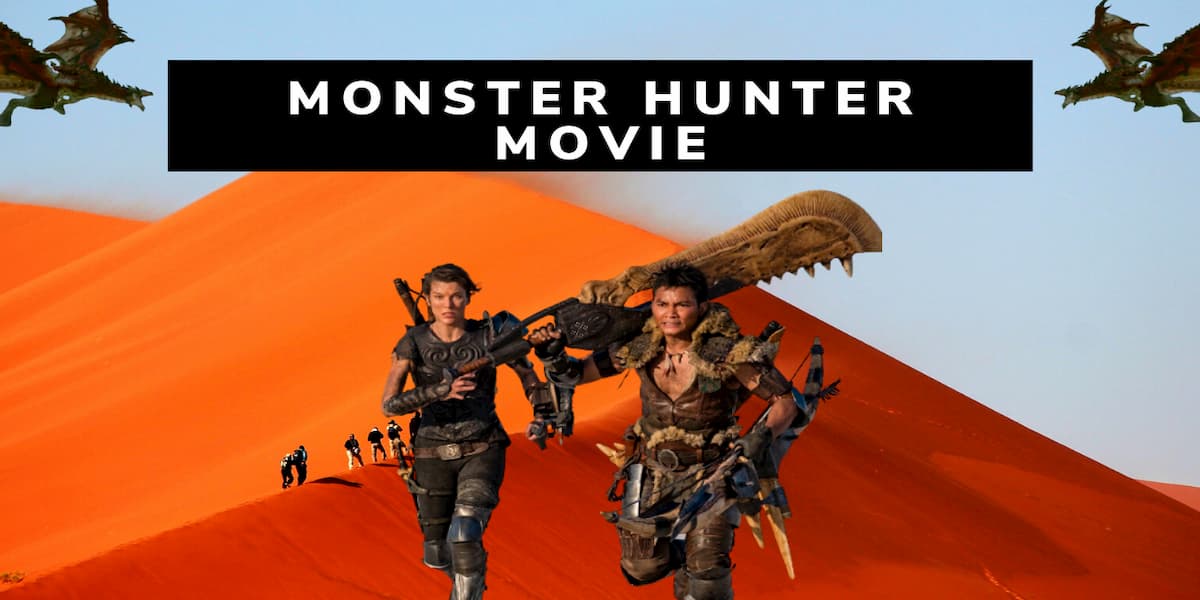 New Monster Hunter Movie | A Film Based on Video Game

Monster Hunter Movie is a 2020  action fantasy monster film. The film tells a story of a soldier who’s in the desert who ends up in a portal that takes her to another world where she meets The Hunter. They engage in a desperate battle for survival against enormous enemies with incredible powers.

Monster Hunter Movie is actually a feature monster action fantasy film based on the video game by Capcom.

This is the newest collaboration between Anderson and his wife Milla Jovovich after their Resident Evil Franchise ended with the final chapter and yet again they’ve come together to make another video game adaptation.

This time based off of the popular monster hunter series. Milla Jovovich plays a soldier who’s in the desert who ends up in a portal that takes her to another world, where she meets Tony Jaa dude who knows everything about these monsters are lurking underneath neth the sand. And also Ron Perlman’s in the movie looking like a lion.

I was looking forward to a mindless experience this year has been horrendous and I wanted to watch a movie like this.

Normally I don’t care about Paul W. S. Anderson films. His movies are usually pretty bad. Most of his films are unoriginal based off of other material and even his best original film which is Probably Event Horizon at times feels very much like an alien movie, which he got to direct telling versus predator, so that makes sense.

None the less, I want to turn my brain off and I certainly did with monster hunter and it’s pretty much exactly what you thought it would be.

It’s Milla Jovovich running around shooting that monsters. Running directly towards these gigantic creatures like she’s in shadow of Colossus or something.

There’s a lot of horrible cringe worthy dialogue jokes that don’t land. One joke that actually got the film in a lot of trouble that has been edited out of the American version that I saw.

There’s even an opening quote in the film that appears on screen. But the quote isn’t attributed to anyone. It just appears in quotes, but there’s no name for who set it.

I was like wait what. It was like one of those DVDs you see for like a really bad movie and you can tell the studio wanted to in some way include a quote from somebody. But they couldn’t find any good ones on.

So on the back they just put in big letters that’s “thrilling thrill ride of intensity and white knuckled tension”. But there’s no name and you’re like  they just put that there to make you think it was good but it’s not.

And we were introduced to the location our heroes are in. They provide the longitude and latitude number in the bottom left hand corner of the screen. Which to my knowledge they never do again.

And when I read that I was like why did I have to know the exact global position that they are in. But if you’ve watched a Paul W. S. Anderson film that happened after Alien Versus Predator, you’ve come to understand how he likes to edit his action sequences.

I don’t think he listens to anyone. I don’t think he hears constructive criticism and if he does he just doesn’t care because he’s getting paid to direct. I don’t know the man obviously, but that’s what it seems like.

Because once again he’s made a film that has incomprehensible action sequences insanely quick cut editing.

Even when there isn’t necessarily a fights or chase happening onscreen hill sometimes insert shots of actors faces reacting to things for less than a second.

And it almost seems like you can barely register what’s going on. It’s not even on a subliminal level. It’s worse than some of the a live here megaton columbiana looking  from like the early 2010s. It’s really atrociously edited once again.

And you have Tony John on this movie Tony Jaa can do all of that. You don’t have to fake it with him.

Which it makes it more maddening. He’s the best part of the film by the way. He’s been trapped in this monster world so he’s able to teach Milla Jovovich things.

But he also doesn’t speak English, so they have to communicate through things like Hershey’s chocolate and she gives them some of that he loves it and start screaming for chocolate.

I never played the monster hunter games but a friend of mine did and I don’t remember them being like this.

Obviously the creature designs are similar to some of things you might see on the covers. But this story I don’t think this was the story.

So I can see a lot of monster hunter Die Hard fans being disappointed that once again Paul W. S. Anderson has taken another video game franchise that people love and turned it into something else.

All I can think of and I see a phone like this is that either Anderson likes making these kinds of movies very much and will continue to make them forever or it’s the only kind of filming get finance anymore.

Which also doesn’t really make sense. Because there’s a lot of money all over the screen. if you wanted to make a smaller movie, I bet you we could.

I think he likes making these movies. Great make them, have fun. Sir life do whatever you want, but like seriously another crazy terrible video game adaptations come on man.

The film also barely has a third act. In fact it’s third act feels like the first act first sequel they’d like to make.

It doesn’t really feel like a structure. Just a lot of things happen and people walk from one location to the other. That’s about it. They really want a sequel.

I’m probably always going to like seeing Milla Jovovich  kickass. She’s great at it. She’s really  convincing in this movie as she always is. She’s a lot of fun to watch. I like a quite a bit.

And like I said I was looking forward to a brainless movie and I watched it with a buddy of mine at home because I have the screener link and we had a really good time.

Just relaxing and kind of laughing at a lot of the terrible lines. So if you want to watch the movie from that perspective. You’ll probably have a really good time.

But I can’t help but notice so many of these things especially the editing. I mean it’s so simple when you’ve got somebody like Tony Jaa.

Have you ever seen the protector that guy can do anything in the movie and he can do it very convincingly. You do not have to to mask that with horrific editing.

This isn’t taken where we can meet the needs 18 cuts to hope a  fence this is Tony Jaa he can do that really well, you don’t have to fake it. It’s crazy.

Guys, thank you so much for reading my review. See you next time.