The new American romance drama film Monday 2021 is here now. Check out its info and review.

Monday 2021 romance-drama movie directed by Argyris Papadimitropoulos and his starring Sebastian Stan as Mickey, who’s a DJ who gets introduced to Chloe, played by Denise Gough.

One hot summer night in Athens, the attraction between the pair is immediately palpable, so palpable that before they know what, they’re waking up naked on a beach one Saturday morning, the cops pick them up because obviously, they’re lewd and naked on the beach.

This is definitely a romance film. This is a film for anybody that wants to go and see Sebastian Stan do all the things that you hoped that he was doing with Chris Evans during Captain America. That probably delighted half of you and angered the other half. I’m sorry.

But you do see this relationship evolve. You see it blossom, but you also start to see seeds of maybe these two should not have been put together.

Maybe this couple, as much as they want to try to fight it in that they want to be together at the end of the day, don’t necessarily work and don’t connect in the right way. And that’s what this film explores. It’s pretty cheesy. It’s a cheesy film. It’s a Lifetime romantic film, but I don’t really mean this in a bad way.

First, the chemistry between Sebastian Stan, and Denise are really well done. I think they worked together. They played the part very well. And I think the romance, the chemistry all connected. And you’ve got the relationship and that you bought into it. And there are some serious dramatic elements as well to both of their characters.

The story just is so damn cheesy. It’s tough to get past that. However, I would say that if you’re someone that goes and checks out lots of these Hallmark films, checks out these Lifetime films, wants to kind of be whisked away on kind of a romance slash drama, almost kind of encapsulates the Before trilogy film. If you’ve not seen that before.

I definitely would check out the Before trilogy before I would check this film out, because they do a very poor way comparatively.

But I do think that there’s a merit that there are people that could check this movie out and it could have a decent time with. I know it’s got about like a 50 something percent on Rotten Tomatoes. 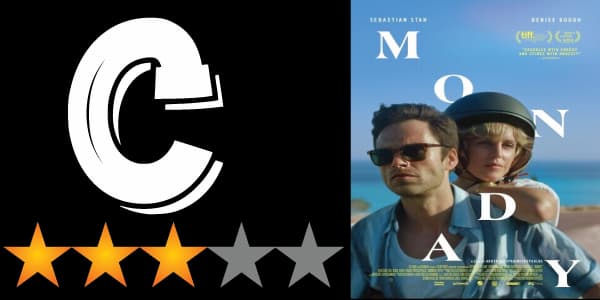 If people like this, then it’s doing its job well. So I would definitely check it out, especially if you’re a fan of Sebastian Stan.

Guys thank you so much for reading the review of Monday movie. See you next time.

Check out the trailer o the new romance-drama movie Monday.