Misha and the Wolves is a Netflix original documentary aris on August 11th, 2021. And it’s an hour and 30 minutes. It is sort of rated PG 13.

I say sort of because documentaries don’t receive the in theater movie ratings that we usually expect, but I would actually give an equivalent of a PG-13.

Misha and the Wolves Review

Misha and the Wolves is directed and written by Sam Hobkinson and it star Misha Defonseca.

In a nutshell, a woman’s dramatic memoir of surviving the Holocaust takes the world by storm until a falling out causes her publisher to investigate the veracity of her claims.

The Holocaust story of Misha and the Wolves is fascinating enough, but writer and director Sam Hobkinson takes us on a deeper dive with unexpected twists and in turns, making for an entertaining and intriguing puzzled.

So the things that I liked include the fact that I didn’t really have any expectations. I didn’t know anything about the film or the story before I began watching it.

So I had no preconceived notions, and that made it more fun. The story itself and the story behind it are both mysterious and compelling.

Not knowing anything about the story in this film actually makes a viewing experience more enjoyable. It makes it a lot more fun if you don’t know anything about it.

As the story unfolds, it’s interesting to see pictures and videos of Belgian Holocaust survivor Misha defense as a little girl to adulthood. And the writer director actually did a very good job.

Beware of reviews, because there are parties on both sides of this lawsuit that are posting extremely high and it extremely low reviews on various sites.

The two parties that the original lawsuit are Jane Daniel and Misha Defonseca. And again, I don’t want to give anything away.

I’m just saying some of the reviews might be skewed. Mine’s not, of course, because I have no interest in one site or the other.

And then another thing that you need to know is that the bulk of the documentary addresses the lawsuit rather than the story about how Misha was able to survive with Wolves in the forest during World War Two.

Some people might feel bored after the first part of the film, where you get to learn about the woman who claimed to live with Wolves and survive in the forest during World War Two after her parents were taken away and killed probably.

You see pictures and videos of a concentration camp in germany, but nothing that would really frighten children like lots of dead bodies, although the gas Chamber is mentioned.

And then ultimately, some people just don’t enjoy watching documentaries for whatever reason. And this is definitely a documentary.

So let me give you some of the themes that are definitely worth talking about. They are truth versus lies, greed, memory, history, imagination and coping with reality.

So I am going to give Misha and the Wolves documentary a B. 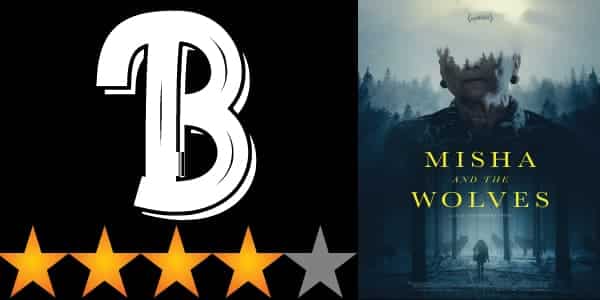 It was very well done. It kept me engaged the entire time. I think you should give it a try.

Guys thank you so much as always for reading the review of Misha and the Wolves movie. See you next time.

Misha and the Wolves

MISHA AND THE WOLVES is the dramatic tale of a woman whose Holocaust memoir took the world by storm, before a fallout with her publisher — who turned detective — revealed an audacious deception created to hide a darker truth.