The film tells a story of a young woman who finds a path to internet stardom when she starts making videos with a charismatic stranger.

After seeing the trailer for the Mainstream 2021 film, which was chaotic and full of over-caffeinated hyperactivity. I became very intrigued to see what this film had to offer.

I am also a big fan of Andrew Garfield and was really excited to see him back on the screen doing something completely different and off-kilter than what we are used to seeing him play.

And Gia Coppola’s debut feature, Palo Alto, although not perfect, was a nice and melancholic meditation on adolescence that ring true and honest.

Unfortunately, her second feature feels so forced and completely empty that the young director should probably just try to sweep it under the rug and act like it never happened.

The movie follows Frankie, played by Ethan Hawke and Uma Thurman’s daughter Maya Hawke, a bartender just barely scraping by and trying to build up an audience on YouTube. Though not being noticed.

She has a run-in with a young man named Link, played by Andrew Garfield, who she films giving an impromptu speech at the mall and ends up getting lots of views and comments on the social media platform.

She convinces him to continue making content with her under the moniker No One Special. But his meteoric rise to fame ends up having life-altering consequences.

One of the many problems with Mainstream 2020 film is that we have seen this rise and fall story so many times before.

And the idea of a cautionary tale about social media, while at one time seemed fresh and timely, is now like beating a dead horse.

I still believe that there could be life left in stories like this, but they need to be injected with creativity, captivating characters, and something new and fresh to say other than just social media is bad and influencers are the root of all evil.

Besides Andrew Garfield. I’ll get to him in a second. This is the first time I have seen Hawke as a performer. And I can see that the girl has talent. But this lead protagonist she is playing has absolutely no depth.

We see glimpses of her being an old soul at the beginning of the film through these silent film title cards. And then we never really get to see that side of her again. Not Wolfe is relegated to the sad-sack third wheel who is in love with Frankie but always ends up on the sidelines.

And Jason Schwartzman is playing the slimy corporate exec who is trying to exploit these youngsters for all they’re worth. And his character never goes anywhere different than what we would expect.

Coppola has also decided to cast many different real-life YouTube stars like Wampus, Charles Milton, Patrick Star, and Jane Paul, among others, to cameo in the film.

Her choice to do this comes off as inspired at first because it does add a layer of authenticity to the movie, but she never does anything with them. And so by the end, their presence just ends up being a gimmick.

And then we have Johnny Knoxville show up in an extended cameo playing a sort of YouTube talk show host who is interviewing Link after he is blown up.

Johnny Knoxville, who also rose to fame as a quasi influencer, albeit one before the likes of social media, who broke his bones and acted a fool to get into the homes of millions, probably has the best scene in the film.

It is a bit meta having the Jackass star confront Link about his hypocrisy regarding his hatred of social media while he is completely taking advantage of the media.

There was a moment in this scene when I thought the film was finally going to go somewhere compelling. And then let’s just say this Link takes a giant shit on those hopes.

And last but not least, we have Andrew Garfield, who is playing this bonkers out-of-control egomaniac. And the actor is quite obviously giving this role his all he is literally going for broke here and to see him on screen for the first time in years as this insane and possible to like Mad Man is somewhat fascinating but altogether jarring.

The thing that is most upsetting, though, is that with a different director at the helm, this performance really could have been honed in to create something really special, but in Mainstream 2020, Andrew Garfield feels so out of place, this performer on stage trying to give the performance of a lifetime in a movie that refuses to do him any favors. 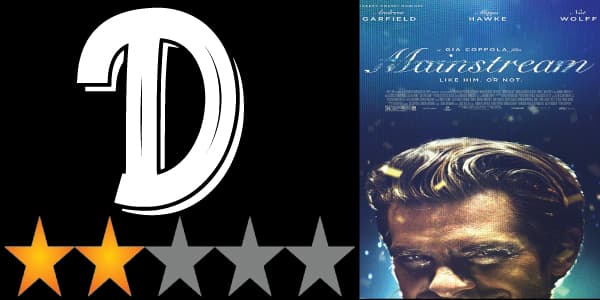 Despite Andrew Garfield putting it all out there on the line with his performance. Coppola’s new film is pretty insufferable and one of the very worst of the year so far.

It is a cautionary tale that has nothing new to say. It completely wastes its talented cast. It is so predictable that you will know how it ends before it even starts. And it has all of the subtlety of a grand piano pummeling you to the sidewalk.

You can check the Mainstream film by Gia Coppola on Amazon Prime.

Guys thank you so much for reading the review of Mainstream 2020 movie. See you next time.

Check out the trailer of the new movie new comedy-drama film Mainstream 2020.