On the Italian Riviera, an unlikely but strong friendship grows between a human being and a sea monster disguised as a human.

Luca is the latest film from Pixar, and it’s on Disney plus this weekend. So when a sea monster named Luca meets a boy named Alberto, who also happens to be a sea monster, they’re able to disguise themselves as humans and they venture to a small town on the Italian Riviera to enter a vesper race.

So I’m not going to get into spoilers, of course. But like, if you just so happen to not know anything about this movie as I did going in, I will talk about certain plot developments early on that I didn’t know were in the film.

And so if you really just want to go in completely blind or if you’ve seen the trailer already, you’re probably going to be fine.

As usual, with every Pixar movie, this thing looks amazing and it sounds amazing. The voice work is top-notch. Everyone’s really good in the movie.

And it’s realistic in that it takes the approach that maybe not everybody is going to like that and there’s nothing you can do about that.

And sometimes you just have to take the best you can get. There are some really great messages and Luka, but unfortunately, it’s easily one of the lesser Pixar films for me.

For me, this is more in line with a film like, say, The Good Dinosaur. All my issues with the film are entirely story has nothing to do with the technical prowess on display or the actors. It’s the story.

First off, I don’t really understand what Luca does under the sea. The film begins with him sort of leading around some mindless fish.

As a sea monster, he has a personality. So does his family. They all have lives and they can talk. But I don’t really understand what it is they do. I understand that they’re afraid of humans.

They’re afraid of being killed or being found. But when Luca walks out of the ocean into the fresh air and meets Alberto, he changes into a human being.

The film makes no attempt to really explain this transformation, why it happens, why water turns them back into a sea monster, and why on land they don’t look like a sea monster.

There certainly could be attributed a deeper meaning to this transformation than perhaps the film wants to go into. But for the most part, you don’t really know what Luca does underwater.

And once he meets Alberto, who is also a sea monster, Alberto has a sort of warped view of what the world is really like.

He thinks the stars are called fish. He blurts out Italian has no idea what he’s saying. He’s just repeating things that he’s heard. He has a poster of a Vesp, a scooter.

And so he believes that a Vesp, a scooter is like all you have to get in life. It’s what everyone should be dreaming about. And so that becomes their entire goal.

For the first half of the movie. It’s a literal fish out of water story. And so you’re watching characters that are very clueless and they don’t know anything, which made it difficult for me to get invested in the story.

It felt very aimless, which I believe was the point. It’s sort of supposed to be this wondrous summer where you’re coming of age, you’re discovering things about yourself, but it doesn’t really feel like anything of merit is going on.

The other issue I had with the movie was the stakes. They’re very low. Obviously being discovered that he is really a sea monster is a problem.

And this film may or may not have been inspired by that, but it’s clearly inspired by higher Miyazaki films. The town is called Porto Ruso, for instance.

But again, going back to the stakes, yes, people might find out that he’s a sea monster and get upset or try to kill him. But his parents are also searching for him in this town.

Because they’re upset that he went out of the water on land and they’re trying to hide that they’re sea monsters as well.

But they’re also taking every kid they find in public and dumping them in water to see if it’s their kid or not, which is funny.

But at the same time, are they trying to like publicly out their kid is being a sea monster in front of everybody? Because that might be an issue since they’re trying to stay in hiding.

So maybe I’m thinking too deeply into this, but this is the kind of stuff that I would have been asking the writers when they were developing this story.

The film picks up a bit once they meet a young girl in town who helps them train and learn how to ride a Vesper and enter into this race.

But there’s also an incredibly cheesy and over-the-top villain who’s the best Vespa scooter racer in the entire town. And he just walks around being an asshole to everybody. And it’s easily one of Pixar’s Islamist villains in a long time.

I think I would have enjoyed Luca more if I knew anything about Luca’s world before he was thrust into a new one. We learned so little about what he does all day.

And we know nothing about his transformation abilities. It’s just sort of established that a sea monster is a sea monster in the ocean and looks like a human on land.

And I just wish I knew more about the world and the aimless nature of the film really didn’t help anything either. I may be in the minority in saying this.

A lot of people might really enjoy Luka, but this one wasn’t for me. It just wasn’t at Pixar Greatest Heights. And I’m just I’m not seeing this leaving a lasting impact like most of Pixar movies. 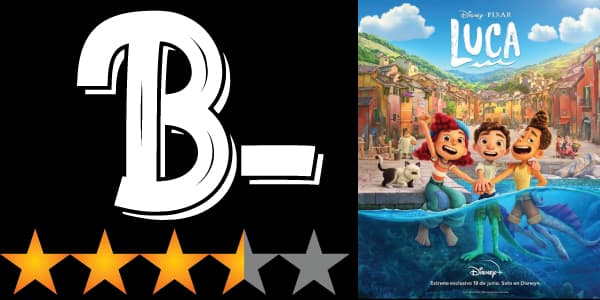 Luca will be streaming exclusively on Disney plus Friday, June 18th. So if you got the chance to watch it let me know your opinion about this film in the comments below.

Luca’s story might be a little run of the mill, but its breathtaking animation, captivating characters, and profound and resonant themes make it another home run for Pixar.

Guys thank you so much as always for reading the review of Disney & Pixar New Film Luca 2021. See you next time.

Check out the trailer of the new animation, adventure, comedy movie Luca 2021.