Love Type D movie is a new comedy, romance, Sci-Fi film by Sasha Collington. Let’s review this heartwarming romantic comedy that dances to its own beat.

So the story is about a girl. And shortly after her boyfriend sends his 12-year-old brother to break the news that she’s been dumped, Frankie Brown discovers that she has a loser in love gene.

This gene guarantees that every man that she ever goes out with will inevitably break up with her. So facing a lifetime of romantic failure, Frankie, the protagonist, decides to turn to this genetics expert that she knows her former nemesis, this 12-year-old boy named Wilbur, who is a science prodigy.

Wilbur discovers a maverick theory to reverse her romantic fortunes, that sets into motion an unexpected and comic journey into Frankie’s past of questionable romantic choices.

In other words, she’s got to go back and meet up with all of her old former boyfriends.

So some of the things that I really liked include this cast that was very new to me. I had never seen Maeve Dermody in anything before and could actually see a little bit of Emily Bluntness in her. And of course, I love Emily Blunt.

I thought that she did a really great job in her role, even though she’s kind of depressed and mopey for most of the movie. So I’d really like to see what else she could do in other films.

I didn’t recognize any of the other British actors in the cast. And in fact, the only person that I knew in the entire movie was the American actress Tovah Feldshuh.

Rory Stroud, who is the young actor who plays Wilbur, is a true standout. And I know we’re going to see more of him, at least I hope so. He was adorable and awesome.

I thought it was also really sweet that they showed lots of romantic couples at the very beginning as an introduction and they featured a Down Syndrome couple.

And so I thought that that was really cute during this montage because there are so many different types of couples. There are some really funny moments in this movie, as well as very subtle ones.

So the British sense of humor is somewhat different from the American humor. But I found plenty of things to laugh at and I could actually see this movie being redone with American celebrities, with well-known celebrities with bigger names, and having it be a real big hit.

Here’s a fun fact. They say that it only takes three point eight seconds for people to fall in love. So comment down below. I want to know, have you ever fallen in love that fast?

Anyway, there’s this light and bouncy soundtrack generally throughout the movie, and there’s a really clever premise that there could be a genetic code for personality and love types that could be tested for.

So I thought that that whole idea was just unique and entertaining. You get to see some nice views of London and it’s just fun to see a British film every now and again.

So there were some things I didn’t like. First of all, at the 45-minute mark, the movie takes a very different twist. The tone and the feel of the movie change quite a bit.

No, I’m not saying that I didn’t like the new tone just that it was very different and unexpected and didn’t quite match where I thought the movie was going.

The ending of the movie was really cute, but I would have also liked a little teaser for another romantic relationship to conquer someone involved in the movie. I don’t want to give you any spoilers.

And then ultimately, it really doesn’t make any logical sense that a person with the dumped gene could inherit the gene because that gene suggests that the ancestors were never able to find love and have children.

So there’s a major flaw in that plot. But still, you suspend your disbelief and it’s just good fun.

This film is about romance. It’s a bunch of adults talking. Mostly there are some British words like wanker and British flavor of profanity, but really there’s not much profanity. So I really appreciated that.

Also, there are some lesbians who are portrayed and there’s talk of premarital relations outside of marriage.

So I am going to give Love Type D Movie C-Plus. 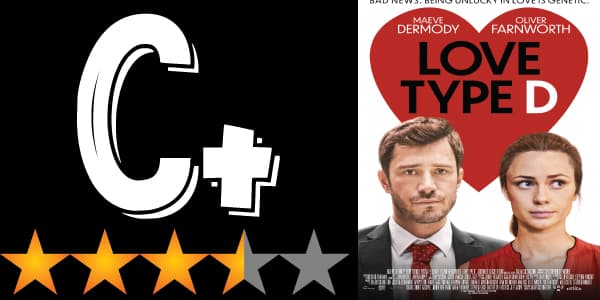 Love Type D movie is opening in theaters and on-demand streaming everywhere on July 9th, 2021. The movie is rated PG 13.  It’s an hour and thirty-five minutes. So if you got the chance to watch it comment below with your opinion about the film

Guys thank you so much as always for reading the review of Love Type D Movie. I hope that you have enjoyed reading it. See you next time with another movie review.