Lorelei Movie 2021 is an American drama film by Sabrina Doyle. This film will be released in Jul 30, 2021. The film is an hour and 51 minutes and you can watch it on Amazon Prime.

Wayland has been in prison for 15 years for armed robbery. Upon his release, he returns to his blue-collar hometown and inadvertently reconnects with his high school sweetheart, Dolores, now a single mother struggling to support her three kids.

Soon after their reunion, Wayland moves in with the chaotic family and becomes a reluctant yet much-needed father figure. But soon he begins to be drawn back to his old ways as Dolores yearns for her pre-motherhood dream of living in Los Angeles.

I’d like to start off this review by saying that this film will not be for everyone. It is a slow-burn family drama that at times container on the edge of melodrama.

But for anyone who enjoys films that are a slice of life that is powered by deeply felt performances in a powerful, fable-like story, this movie is most certainly for you, and I must say that I was completely entranced by every second of Lorelei movie.

First-time future director Sabrina Doyle has skillfully written a screenplay that is at once grounded in reality and also full of whimsy and fantasy.

It is also small and its scope but feels epic in the way that you feel fully immersed in these people’s lives.

What Doyle brings to the table here, among many other things, is a bounty of pleasant surprises. And this is what excites me about seeing films from first-time Future directors.

Lorelei movie sub birth to your expectations at every turn. The moment you think that you know what will happen or how a character will react to something, Doyle spins those preconceptions on their head.

And not only has she shown a death hand at writing a refreshing screenplay, the director also proves that she has an incredible eye.

This is a gorgeously shot film that captures blue-collar life in all of its greediness, despair, and homespun glory.

I also must point out the score from Rom Jeff Russo, who is the composer of the Umbrella Academy and the Fargo television series.

The music here really paired so well with the imagery in the film to create a fantasy-like atmosphere.

And of course, we have to talk about the performances because they are absolutely jaw-dropping across the board.

Jena Malone is also a powerhouse in this role, with absolute control of her craft, and this character could have gone off the deep end in so many ways.

Dolores is an extremely flawed woman who probably should have never been a mother in the first place. But along with the exasperation, Malone gives this character determination and grit.

And Pablo Schreiber and Jena Malone’s chmystery explode off of the screen. It truly feels as if these two have a long and drawn-out history.

The way in which they look into each other’s eyes, you can see the yearning they have for one another, but also a deep understanding.

The fantastic thing about this movie is that every character, no matter how big or small, feel completely lived in.

As if they all have had a history with one another in some way. And there is not a second you do not believe that.

And the three child actors in this movie, played by Chancellor Perry, Parker Pascoe-Sheppard, and Amelia Borgerding, absolutely blew me out of the water.

I was so worried that this movie was going to become cheaper by the dozen situation and devolve into stereotypes and cliches for these kids. But all three of them get their own observative story arc and their time to shine.

The movie never feels flying or soccer and sweet, and that is all because of these wonderful performances and the assured writing.

A lot of people are going to be comparing this film to the Apple TV plus just in Timberlake Led Palmer. And even though I quite liked that movie and they do have many similarities, Lorelei movie has so much more to provide and it is a far superior piece of art.

I do think that the film is a tattoo long, even though it does give the film an epic-like field that I appreciated, I can see many viewers growing tired because of its slow-burn approach.

There are also moments of melodrama that could have been reigned in for a better sense of groundedness.

But these are very small issues in a film that by the end had given me chills on multiple occasions and filled my heart with sadness, melancholy and joy all at the same time. And to me, that is what a film experience is all about. 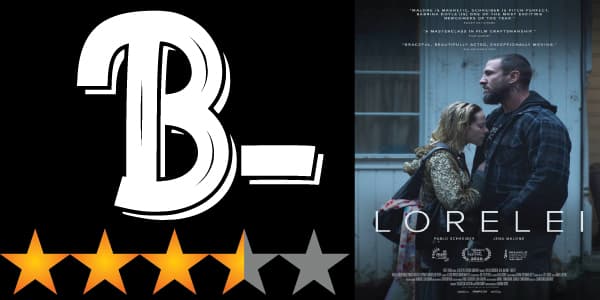 This film is a slow-burn drama that might not be for everyone, but if you open your heart to this beautifully lived and fable, you will be gifted with a bounty of pleasant surprises and a really good performance.

Guys thank you so much as always for reading the review of Lorelei movie 2021.

Check out the trailer of the new Drama, Romance film “The Last Letter From Your Lover movie”.