Check out the review of the American coming-of-age dramedy film ” Lady Bird “. The film is written and directed by Greta Gerwig.

Lady bird movie is written and directed by Greta Gerwig, stars Saoirse Ronan as a young girl named Christine who would prefer everyone in her life to call her lady bird. She’s trying to navigate the remaining years of her high school life while also searching for a college, she’d like to go to. She loved to get out of Sacramento. She was given the opportunity.

And this is a coming of age story, that’s different than most. Usually, ones that focus on a girl are about a romance of some kind. Like she meets a boy in it changes her life and she’s able to go out on her journey an experience great things.

Lady bird does meet boys along the way here. One of them played by Lucas hedges but this movie is not a romantic love story about lady bird and some boy. This is a love story about mother and daughter and how the two of them are so drastically different and how they both make each other’s lives really hard.

And in just that one way, this movie is so fresh and so unique and extremely pleasurable to watch. This is one of my favorite movies of the year. It’s extremely well-acted. Saoirse Ronan gives probably the best performance I’ve seen from her.

She is so so drastically real in this movie. And one of the best parts of what Greta girl wake has done with her script is that scenes kind of began. They don’t feel like they have a natural beginning like most movie scenes do.

When you sit down to write a script sometimes you think about “how am I gonna start my scene?”. Well, we’ll have this logical progression that builds into the moment. Oftentimes scenes began in lady bird with characters mid-conversation.

And you’re like what were they just talking about what doesn’t matter because we’re now observing this moment. And the moments are so well realized because the scenes just come about. That technique keeps this film feeling so raw.

The film also has a really great balance of portraying our lead character at this religious school that she’s going to. And it’s making it hard on her. She wants to blossom she wants to do a lot with her life but there’s a lot of restrictions there.

Normally, when films have a character at a Catholic school or something very strict like that. They portrayed as this being negative like a really horrible time in their life where they weren’t able to follow their dreams.

This movie sidesteps that and presents it as simply not necessarily a roadblock but just something that lady bird has to deal with. It doesn’t say you shouldn’t go to Catholic school. It doesn’t say like don’t believe in these things because it’s hard on you. It just. Shows moments. It feels like you’re watching contained moments throughout this character’s life, which the best coming of age stories do that.

All the performers across the board are terrific. Laurie Metcalf, Lucas Hedges all of them really strong work. There is not a weak link in regards to the actors here. The film also balances the right amount of embarrassments with realism there so many scenes here we just cringe for the lead character.

But it’s not awkward in the way that some films do when it comes off kind of pretentious like “Hey look at this really awkward character we wrote! aren’t they so unique and different and weird aren’t I am great writer?”.

Greta Gerwig really does a great job to avoid all of those cliches. I’d be curious to know how much of the film is improvised because the dialogue flow so naturally between actors. I found myself really caring about these characters.

I was wrapped up in their lives and I was honestly concerned about them. I felt like I wanted to befriend them and be like okay you know there’s gonna be the next day you can get through this. And that’s a sign of a great movie. When you forget that you’re watching one and you just feel so invested in the characters.

Greta Gerwig has done a great job with her solo directing debut she had co-directed another film once before. But this is all her and she shines. This is an amazing debut and I can’t wait to see what else she does.

A few times a year a movie like lady bird comes. Along with the kind of film where it feels like “Hey this could go on a lot longer”. like I would like to see what else these characters do. I want to know what else these people are going to do “what I’m gonna do tomorrow?”.

I want to know what’s happening in their lives and it’s almost sad when it ends because you’re thinking man I was really wrapped into that. It’s short it’s like 93 minutes but it’s  quiet and enjoyable watch. And in retrospect.

I have not one single flaw or anything about this film, that I felt was out of place. It’s a mesmerizing debut. 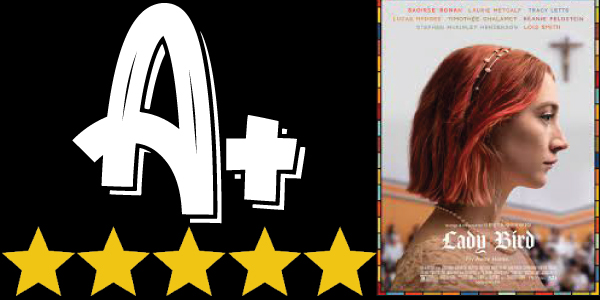 It’s worth your time thank you so much as always for reading my reviews. See you next time with another movie review.