Jungle Cruise 2021 is an American fantasy adventure comedy film. The film is PG-13 and it is 2hours 7minutes.

Jungle Cruise movie will be released on Friday, Jul 30, 2021. You can watch it on Disney.

Jungle Cruise movie 2021 is directed by Jaume Collet-Serra from a story by Glenn Ficarra & John Requa and a screenplay written by Michael Green, Ficarra, and Requa, based on Disney Parks’ theme park attraction of the same name. Produced by Walt Disney Pictures.

Based on Disneyland’s theme park ride where a small riverboat takes a group of travelers through a jungle filled with dangerous animals and reptiles but with a supernatural element.

A small riverboat captain named Frank Wolff transports British scientist Dr. Lily Houghton and her brother McGregor Houghton on a mission into the jungle to find the tree of life.

To be honest, I feel like this Jungle Cruise movie has been in development hell for ages, and we saw a trailer for it nearly two years ago, and with it then being delayed by COVID, my excitement for it has Unfortunately waned.

But within the first 10 minutes my love for all things adventure kicked in and I had an absolute blast with this movie, but there are a few issues with it that really stop it from being one of Disney’s best live-action productions.

Let’s start off with the positives here and there are many above all else. What really elevates the material here are its two stars.

Dwayne Johnson is one of the most bankable stars in Hollywood and there is a reason why he is charismatic, funny and he injects so much heart into every single one of his roles, and he also doesn’t take himself too seriously.

All of these things once again come together to create another winning role for him. And Emily Blunt alongside Johnson as she did An Edge of Tomorrow shows that she can outshine her leading man whilst still uplifting him.

The two have lovely chemistry together and their banter back and forth will put a smile on every audience members face.

Well, some of them complaining that they’re romance, which is shown in the trailers, was unneeded. I actually thought it worked well in the confines of this story and genre, and the film was never to in your face about it.

The other bright light in the movie is hands downJack Whitehall as Emily Blunt’s bumbling brother McGregor Houghton, who lands nearly every comedic beat and adds audacious energy to the proceedings.

Jungle Cruz is also jam-packed with exuberant action scenes that can be a bit over the top but are never lacking in excitement.

The sense of adventure rings through every moment of the film, and it reminds you as a viewer why you love this genre so much and how much you have missed it.

Though it never reaches the heights of Indiana Jones, The Mummy, or even the first two Pirates of the Caribbean films, this classic genre is severely lacking on our modern screens and it feels so good to be inhabiting it again.

And without giving away any spoilers. There is also some LGBTQ representation in the film that is pleasantly surprising for a Disney property, and I believe very thoughtfully done.

Also, speaking of thoughtful, I really appreciated the movie’s nods to the original Disneyland ride, how Dwayne Johnson’s punny jokes were not unlike that of a tour guide. I’m sure you’ve had before on the attraction.

And the fact that his character at the beginning rigs everything on the Riverboat ride to make guests feel like they are all in peril when really it’s all just an illusion.

This felt really tongue in cheek and well done for me. But there are two things about Jungle Crews that really hold it back.

The first being Jesse Plemons as this Imperial German expedition IST Prince Joachim. Though the extremely talented actor has blown me away in many of his roles, everything about this character seems completely missing guided.

Including his performance with the ridiculous accent, his grading dialogue, and his lack of motive and backstory.

Prince Joachim felt like an entirely unnecessary villain. That’s the only purpose was to add more obstacles for our heroes and in the process just bloated the runtime.

And unfortunately, Jungle Cruise is pretty much lacking any sort of originality at all. Though it is great to see the adventure film alive and thriving again. This movie takes every beat from the genre unapologetically.

The first half is pretty much the Mummy, and then the second half MERS, the Pirates of the Caribbean films in nearly every way.

If you’ve seen any of these movies you have seen Jungle Cruise before. I just wish they could have come up with something a little bit more fresh and unique to match the lovely acting and production values.

Besides those qualms, though, Jungle Cruise is a fun ride that I think any member of the family, no matter what age, will enjoy.

It also marks Disney’s second live-action film this year that far exceeded my expectations, though I do think I enjoyed Cruella a bit more.

So I am going to give Jungle Cruise movie 2021 a B-Minus. 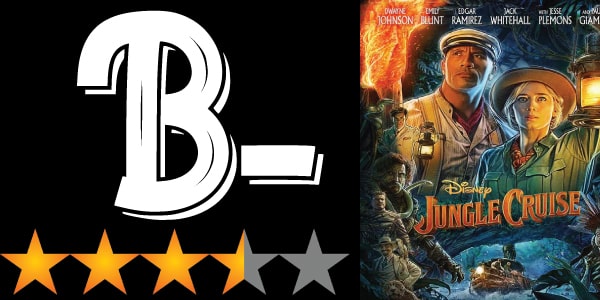 This live-action Disneyland ride adaptation is certainly not doing anything to reinvent the wheel, and it could have made some tweaks to tighten up its runtime, but it is still a blast for the entire family and definitely worth the price of admission.

Guys thank you so much as always for reading the review of Jungle Cruise movie 2021, See you next time.