Josee, the Tiger and the Fish (Joze to Tora to Sakanatachi) is a 2020 Japanese animated romance comedy-drama film, based on the short story of the same name by Seiko Tanabe.

Josee, the Tiger and the Fish Cast & Crew

Josee, the Tiger and the Fish Review

Josee, the Tiger and the Fish (Joze to Tora to Sakanatachi) is a Japanese animated film, based on the short story of the same name by Seiko Tanabe.

Josee, the Tiger and the Fish  movie is directed by Kotaro Tamura and written by Sayaka Kuwamura, with original character designs by Nao Emoto (who also created a tie-in comic), animation character designs by Haruko Iizuka, and animation production by Bones. The film stars the voices of Taishi Nakagawa and Kaya Kiyohara.

Tsuneo is a university student and Josee is a young girl who has rarely gone out of the house by herself due to her being unable to walk. The two meet when Tsuneo finds Josee’s grandmother taking her out for an evening walk.

It’s the tale of Tsuneo helping Josee become a little more independent, both physically and mentally, by working to overcome the physical disability that rules her life.

Josee is seen in a green cotton skirt. Her legs are always hidden beneath the skirt, and she’s always in her wheelchair or dragging herself around on the floor in her grandmother’s house.

It is like if Josee is a mermaid who has found herself stranded on dry land. Josee does not fit in the world because she’s in a wheelchair. There are many places for Josee in this world, but there are few places designed for her.

The environment around her was not always conducive to getting around. The limited availability of ramps and elevators, along with a simple lack of effort, meant it was difficult to get around without assistance. She often had to ask strangers for help or rely on the kindness of neighbors when able-bodied people made fun of her wheelchair.

But her house even is far from ideal. Her wheelchair can’t make it past the entryway, so she’s forced to drag herself from room to room. Because she can’t cook or clean or go anywhere by herself, she’s completely reliant on her grandmother for everything—and her grandmother intends to keep her that way for as long as she can to keep her safe.

Josee spending her days painting images about her dreams. She uses her paints to create an image of what she envisions beyond the barrier of her room.

While it can sometimes be scary to follow your dreams because things are unpredictable, nothing worthwhile is ever easy. The best way to day dream is to find a passion, work hard in your spare time to pursue that passion, and take the risks you need to make your dreams come true.

It takes bravery to pursue your dreams. This journey won’t be easy, you will have to come up with a plan to get around any problems on the road and there will be people telling you that it’s impossible. So your dream is worth everything it takes to get there.

All this is the message delivered perfectly through the Josee, the Tiger and the Fish film. The film is as exciting as it is full of good themes. You are going to learn a lot from this anime.

“Josee, The Tiger and the Fish” is a feel-good movie about believing in yourself. This uplifting film raises the spirits of anyone searching for the meaning of life.

Josee lives in a wheelchair gives us all a peek into what it’s like to live in a world not designed for us while also highlighting the importance of personal independence to the human soul.

Besides the great story of the film, the Animation, Art, and Music were really good. I have enjoyed watching this movie even though I have felt these are some scenes were like forced but the movie was really good.

So I am going to give Josee, the Tiger and the Fish movie a B. 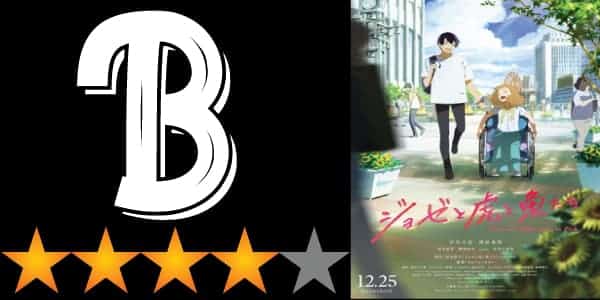 Guys thank you so much as always for reading the review of Josee, the Tiger and the Fish movie. See you next time.

Josee, the Tiger and the Fish

Check out the trailer of the new Romance Anime film “Josee, the Tiger and the Fish”.