Jolt 2021 is a new action–comedy Amazon original movie. The film is an hour and  31 minutes and it is rated R.

A bouncer with a slightly murderous anger-management problem that she controls with the help of an electrode-lined vest she uses to shock herself back to normalcy whenever she gets homicidal. After the first guy she’s ever fallen for is murdered, she goes on a revenge-fueled rampage to find the killer while the cops pursue her as their chief suspect.

I want to start this off by saying that Jolt is by no means a good movie. In fact, there are moments when it is a really bad one.

The writing is atrocious, the effects can be downright terrible. And it has been quite a long time since I have seen a movie that is so all over the place.

But Jolt is like that messy drunk at a house party that can’t seem to pick itself up and is flailing all over the place. But they’re also injecting so much chaos and debauchery into the night that, Let’s be honest, you wouldn’t have had much fun at that party without them.

Jolt follows Lindy, a woman who is triggered so easily that she becomes a homicidal maniac whenever anything pisses her off or anyone gets on her bad side.

She has gone through the wringer of trying to control this terrible affliction, but finally, a scientist is able to fix it temporarily through shock therapy.

Lindy is finally starting to assimilate herself back into normalcy when a date goes horribly wrong and she heads out on a journey of revenge, no hold bard.

Many viewers are going to be going into Jolt, expecting something along the lines of Atomic Blonde or even more recently last week’s Netflix offering Gunpowder Milkshake.

And I’m gonna tell you right now that this movie shares only modest similarities to those more well put together production.

But whereas Gunpowder Milkshake was trying to hide its terrible script with stylistic flourishes and its amazing cast, even though I still quite enjoyed it, Jolt seems to know exactly how bad it is and balances

This film is quite self-aware that it is ridiculous over the top and extremely dumb. And when it is conscious of all of this, Jolt does work in a midnight movie sort of way.

We have Lindy slapping around waitresses, electrocuting nuts, and throwing babies around. It is all hilarious and joyously bonkers, but only when it is in on the joke with us.

Kate Beckinsale, who is obviously searching for her next big branch after Underworld here, is having an absolute blast hamming it up in this movie.

She is strutting around kicking ass and being so pressed in the most pushed way. It is fantastic. The actress knows exactly what type of movie she is in with Jolt, and so we can easily join in on the right with her.

The rest of the cast, I’m honestly shocked they agreed to join this movie. Pretty much all of them are wasted here especially Bobby Cannavale who once again shows up and does absolutely nothing with another vanilla role. Someone, please give this man something more to do. He has way more talent than this.

But really this is Kate Beckinsale’s movie. She knows it, we know it. And so really nothing else matters.

When Jolt started to lose me, though, it was any time it started to take itself too seriously. This happens more towards the end. And it’s a real shame because you feel like the movie is trying to backpedal and be something that it’s not.

There is a fight scene near the finale with Kate Beckinsale and a group of fatties that feels like a derivative and sedated version of so many action moments that have come before it. And you can instantly feel Jolt losing its very essence as it all plays out.

And then they throw a tact on ending in there that is painfully obvious that they’re trying to set up for a sequel that will almost certainly never happen.

And it doesn’t work in any way, shape or form. But when Jolt is just being its silly farcical self, it does work. And it is damn fun.

And I have a feeling that if you’re completely flushed with a group of friends, you’re gonna have a really great time with this movie. 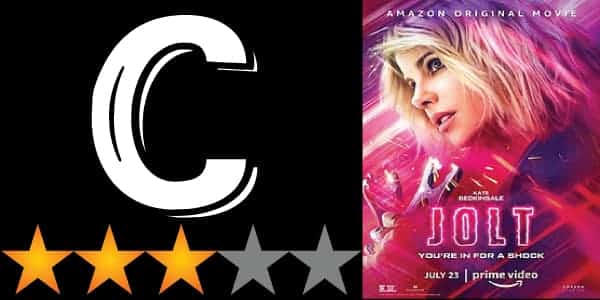 This is one of the most ridiculous movies you will see all year when it has no shame in being the schlocky Be movie that it really is. Jolt is a blast.

When it tries to be something that it’s not, it really fails. But where it ultimately could find some success is as a midnight movie.

Guys thank you so much as always for reading the review of the Jolt movie. See you next time.

Check out the review of the new action com film “Jolt 2021”.