One of the most anticipated horror films that came out this week is Jakob’s Wife 2021, written and directed by Travis Stevens.

It’s finally here! The wait is over and Jakob’s Wife 2021 horror movie has arrived to scare the wits out of us. this film was released theatrically on April 16th for all you horror fans who love a good fright fest.

Jakob’s Wife 2021 film was directed by Travis Stevens, the director of Girl on the Third Floor, and stars Barbara Crampton.

As a woman trapped in a pretty boring marriage with a minister played by Larry Fessenden. She feels like her life has been shrinking over the past 30 years. But encountering the master brings her a new sense of power and an appetite to live in Boulder. However, the change comes with a heavy body count.

I’ve been looking forward to this movie for a while. Girl on the third-floor film wasn’t necessarily for everyone, but I found a lot of enjoyment in that movie. I thought it was extremely well directed and very unique. And I wanted to see what Travis Stevens did with this movie.

Also, Barbara Crampton is a genre legend. She’s been in great horror films since the 1980s, and I love that she’s been given a lead role here and given a huge opportunity to flex her comedic muscles as well as her dramatic ones. She’s easily the best part of the movie.

This is a script that she championed for many years. She read it a few years back and tried to get it made for a long time.

Her and Larry Fessenden play off each other really well because at the core of the movie, it’s sort of about a relationship that’s crumbling to older people who just don’t really feel that passion anymore.

And one of them, the husband, doesn’t really notice just how much his wife is suffering, how much she feels like her life isn’t worth anything. She’s really under his thumb and he doesn’t even really notice.

It’s one of those relationships where you can’t really call him abusive, but he’s just not really there. He doesn’t understand just how much she needs. And he’s pretty OK with constantly talking over her, interrupting her all the time.

So in a moment of relative weakness, when she encounters an actual vampire, she sees an opportunity to take hold of her life.

This is something I’ve seen a lot of directors do lately and writers are that they’ve basically taken something that is essentially a domestic dispute of some kind, a film in which characters just aren’t getting along, whether they’re boyfriend, girlfriend, or married or whatever the fuck, and introduce a genre element.

In fact, that’s how you really do the best horror movies. The best horror movies are dramas that were compelling stories and you can maybe make a whole movie out of it, but you’re introducing a genre element to it, whether it’s a vampire or a ghost or possession or some kind of thing. And Jakob’s Wife does that very well.

But it also wisely understands how funny it could be to see a couple that’s been married for a long time suddenly feel like they have to stake people through the heart because the wife is craving blood.

And Larry Fessenden in particular does a really great job with the humor in the movie. Sometimes the comedic tone shifts don’t always feel natural. There are scenes that feel very serious and kind of important. And suddenly there’s a joke and it doesn’t always work. And sometimes it’s so jarring that it actually does work and you get the laugh because you just weren’t expecting it in a scene like this.

And it’s pretty much impossible to not notice how cool it is that two older actors are getting the showcase in a horror movie where Hollywood is so dominated with twenty-somethings in these movies, it’s awesome to see these seasoned, pro staking vampires through the heart and sucking the blood off of a torn-off head.

That being said, not everything about the movie worked for me. Sometimes, as I said, those tonal shifts weren’t as polished as they could be.

And the genre stuff that the characters do, you know, sneaking into an old place where there’s rats and maybe two wooden crates, it feels like they’re limited a little bit by their budget here and trying to figure out exactly what they want to have on-screen.

And there were a few performances from some supporting characters that weren’t quite there yet, just not quite up to speed yet.

But for the most part, I really enjoyed Jakob’s Wife 2021 film because of the commentary that it presented about how a woman in a marriage for so many years can feel trapped and see an opportunity to really flourish and take hold of a life that she never had before.

And the film is smart and that this married couple doesn’t immediately solve all of their problems, nor does one of them just immediately end their relationship.

They both feel like, well, we’re at an age where we kind of has to figure this shit out. We can’t just, like, move on. We like, what are we going to do about this. And so that was interesting because it forced the husband to come to terms with how he treated her in the past.

A lot of times in movies where they have messages like this, whoever was being wrong is is killed or is immediately out of the picture. This movie says, no, try to fix it, make an attempt at fixing it. 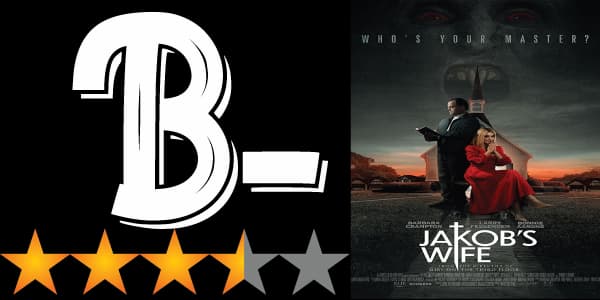 Yeah. This vampire stuff and blood and gore what you want to see. But there was actually a surprising amount of substance and depth to the characters, although the tonal shifts didn’t always work. And I think that could have been polished a little bit more. I think this is definitely worth seeing.

Guys thank you so much for reading the review of Jakob’s Wife 2021 movie. I hope that you have enjoyed reading. See you next time.

Anne is married to a small-town minister and feels like her life has been shrinking over the past 30 years. After she meets “The Master,” all of that changes suddenly as Anne discovers bite marks on her neck, an appetite for power (and living big!), and realizes Jakob will have his work cut out for him if he wants their marriage back… Check out the trailer of Jakob’s Wife 2021 Movie.