In the Heights movie, a new musical drama film is brimming with passion and creativity film and is a true celebration of movie-making magic.

WB is releasing its new film adaptation of the Tony Award-winning Broadway show In The Heights. Let’s know together if this film worth to be watched.

In the Heights Cast & Crew

In the Heights Movie Review

In the Heights movie 2021 was directed by Jon M. Chu and written by Quiara Alegría Hudes. It is based on the stage musical of the same name by Hudes and Lin-Manuel Miranda.

The film centers on a variety of characters living in the neighborhood of Washington Heights who all go through the self-realization of what it means to be home.

With the success of Lin-Manuel Miranda Hamilton. It was only a matter of time before Hollywood took a gander at his first show in the Heights and realized that it is ripe for the silver screen treatment.

It’s always a risk adapting these musicals, though, because if you don’t find the right creative team to bring the production to life, it can be disastrous.

But within the heights, Warner Brothers has brought together the right people at the right time to fully capture the stage play in all of its glory.

The film follows Usnavi, originally played by Manuel Miranda on Broadway here by Hamilton mainstay Anthony Ramos, who is absolutely magnificent in the role.

Usnavi owns a bodega in Washington Heights. He had dreams of going back to his home country to reopen his father’s old bar.

While he prepares to make the trip back. He falls in love with Vanessa, the gorgeous girl who works in the neighborhood Salon.

Cares for the aging Cuban lady who lives next door and welcomes back his old friend Nina, who has some shocking news to share.

All the while, an impending blackout frames this interconnected Latin next story with a vast array of colorful and unique characters who are all trying to define what their definition of home actually means.

Watching In the Heights movie, you can feel every frame of the film exuding with heart, passion, and creativity.

The movie is a celebration of culture, family, and of love, and it truly makes you want to get out of your seat and dance in exultation.

Though the film is thin on plot, it is all about its eclectic cast of characters, and you cannot help but fall head over heels for each and every one of them.

There were so many moments during this production that I got chills from either the music, the dancing, the innovation, the story beats, or all of them all at the same time.

I’m honestly getting goosebumps just talking about it right now. It is just that good.

Jon M. Chu who directed the second and third installments of the Step-Up franchise and the critical and audience darling crazy rich Asians was the perfect choice to helm this adaptation.

Chu has really evolved as a director and as he showed in crazy rich Asians, he is a master of indulgence.

While many directors get bogged down in excess, Chu relishes in it. He throws in everything, including the kitchen sink, and is completely unapologetic about it.

As a dancer himself, he has an eye for choreography and how to translate it onto the screen in an explosive way. Say what you want about those step-up movies, but the guy knows how to direct dance.

This is also his most visually impressive film to date. There are some frames of In the Heights movie that deserve to be on museum walls.

The cast of In the Heights are all outstanding, though I must say that you can’t tell. Most of them are singers first and actors seconds.

But that was never too noticeable throughout because of the pure dedication these performers have to their roles.

Though it is Anthony Ramos who anchors the film as our lead Usnavi and well. The thespian has had supporting roles in movies like Honest Thief and A Star is Born.

This is truly his first leading performance that isn’t on stage and he is absolutely electric and steals every scene he is in.

I can’t help but feel like there is nowhere to go for Ramos now other than up and into the stratosphere. And I think he should definitely be in the conversation for best actor in a leading role in next year’s Oscarsز

Although In the Heights film will be streaming at home on HBO Max, I implore everyone who is watching this to go to the theaters and experience this film on the biggest screen possible.

This movie is meant to be seen with an audience, to laugh, to cry, to feel overjoyed together. Hearing our performers belt out their tunes on the Dolby surround sound and the dance numbers displayed towering above you on a theater screen is exactly how this was intended to be seen.

I promise if you feel comfortable and are able in the Heights is the movie of the summer that is worth taking a trip to your local cinema to see.

Though In the Heights runs nearly two and a half hours, I did not once feel that runtime. In fact, as the credits began to roll, all I wanted was for this film to keep going.

I wanted more time with these beautiful, unique, and captivating characters. And although I do think that the ending didn’t necessarily stick the landing fully.

There was a part of me that long for a bombastic final number and thought that it was too quick to resolve all of its story threads. It didn’t bother me because the time I was able to spend with these characters was priceless.

I believe that In the Heights is the best film of the year so far and a 2021 soul masterpiece.

So I am going to give In the Heights movie an A. 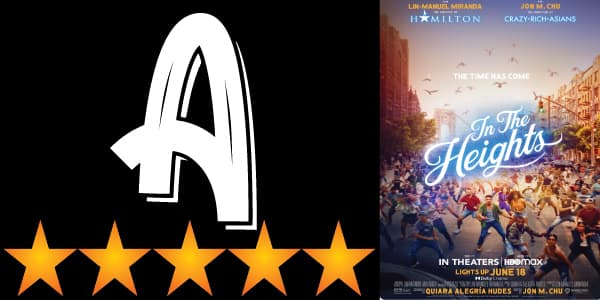 If you experience one film in theaters this year, it should be this one. It will bring you to tears, provide you with laughs a minute, force your feet to tap and make your heart soar.

In the Heights will be in theaters and streaming on HBO-MAX Friday, June 11th. So if you got the chance to watch share your thoughts about the film in the comments bellow.

Guys thank you so much for reading the review of the new film “In the Heights”. See you next time.

In the Heights Movie Trailer

Check out the trailer of the new musical drama film “In the Heights2021”.