In the Earth 2021 is a mystery, thriller, horror movie that will make your skin crawl. You can check out the review, trailer before watching it.

In the Earth 2021 Horror Movie Review

Today we’re talking about the horror film In the Earth 2021. The film was directed by Ben Wheatley and its stars  Joel Fry, Reece Shearsmith, Hayley Squires.

Well, what a weird, trippy little horror film this is. I went into this film expecting I actually don’t know what I expected.

But once I saw this was a horror film, I was like, OK, I’m intrigued. And then I saw the movie and oh, boy, I really liked it.

It is a strange, strange movie. It’s not going to be for everyone. But I do see a certain community loving this. The horror fans are going to go wild for it.

It reminds me of things like I’ve seen it and compared to stuff like Annihilation and The Ritual. But in general, it reminds me of honestly, its own film.

There’s something very original in here. Yes, it’s a full horror. Yes, it has trippy visuals and it’s offering up a lot of weirdness, but it still feels like its own story, trying to tell its own message. I don’t know what the message is.

Maybe like be kinder to the earth. Maybe people are crazy, maybe don’t go into the woods in the middle of nowhere.

That’s a lesson I learned from this, because I think this movie is trying to say something and not just trying to copy other films within its own little genre.

I really appreciate what this movie did, what it tried to do. And overall, I do say this is one of the better films I’ve seen through all of Sundance.

In Pandemic era UK. We have Alma and Martin, two researchers going out into the woods looking for someone named Olivia. She’s there to be doing some work, but she’s gone missing, no communications.

So once they venture into the woods, their lives are forever changed. This is a journey that they go through and it is just nonstop craziness from the surreal visuals to the graphic violence, to the overall, just like kind of existential questions it tries to offer up.

This journey that these two characters go on is intense and it acted beautifully. These two actors do such a good job with this performance.

I believe them. Even when they’re just staring out into nothing and being blinded by weird editing and visuals. I’m like, I feel it. I believe you. I’m into it.

These two characters really make it believable. Then Wheatly really picked two strong people here to kind of carry it through.

I think this could kind of easily be a messy, trippy, surreal film and not have a lot of attachment to it. But I felt for these characters, I felt for the Martin character. Joel Fry does so much in this, that I’m like, Baby, what are you doing? Please, please, just do good and leave this like, stop, don’t let him do that. Oh, are you going to let him back off something?

Yeah, this movie just has a lot of me going, what the hell. And I love that. I love seeing characters go on a journey and you’re like, don’t do that, don’t do that. I wanted to yell at my screen.

Maybe one of the only positives of Sundance being at home is I can be vocal and I can shout don’t do it. And that’s what this movie made me do. And I absolutely love that type of vibe.

This movie is a proper WTF and it uses sound and lights so effectively. That’s actually like a plot point in the movie. They’re trying to communicate with some weird entity in the woods.

So they use these like flashing lights, these weird, surreal, strange sounds to attract it, maybe to communicate with it and that comes off so well in the film.

The movie also has fantastic editing that helps all of this flow and all of this feels very unique and very fun and kind of easy to watch.

Not easy, because sometimes I’m like a lot of flashing images. OK, calm down a little bit. But yes, overall, I really love this film’s use of its sound, its editing, and its lighting.

It just knows it needs that to push this over the limit. If this just had simple cinematography, it just had like a normal sound design, like you would see in most horror movies, it wouldn’t be as effective.

It’s exactly what you would want from this type of movie. It’s just good filmmaking that just backs up a weird, surreal story.

You can get away with not having a hefty story. And I don’t think this movie has a really big plot or the script is like the most groundbreaking.

But it uses the filmmaking around it to elevate the material with its acting with its like technical stuff. I just a really, really appreciate what this had to offer.

I cannot wait for horror fans to get into this, because I can see this being one of the biggest ones of twenty twenty-one.

But I think in the Earth is one of those movies that will get people talking and really will have one of the biggest fan bases outside of Sundance. 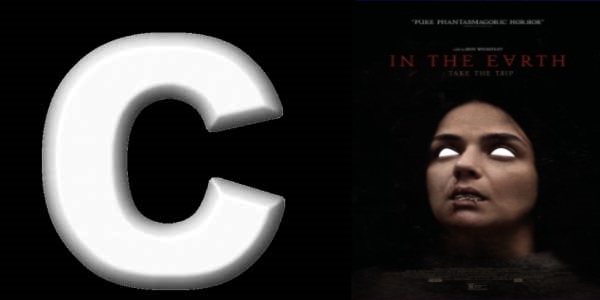 I’m so happy to share this review with you all. All right, guys, what did you think of this review? What do you guys think of In the earth film? Let me know what you think in the comments down below.

This film will be available in theaters on 16 April 2021. So check it out and comment with your opinion.

Thank you guys for reading the review of the In the Earth 2021 Horror film. I hope that you liked it. See you next time.

In the Earth 2021 Horror Movie Trailer

If you like scary movies and you want to see one, then check out the official trailer of the new horror movie “In the Earth 2021”.