The film is inspired by the viral New York Magazine article, Hustlers follows a crew of savvy former strip club employees who band together to turn the tables on their Wall Street clients.

Hustlers movie is directed by Lorene Scafaria and stars Constance Wu and Jennifer Lopez, and is based on an article by Jessica Pressle.

And that article detailed a true crime story in New York, in which former strip club employees banned together to target Wall Street clients of theirs.

This film has been getting a lot of positive buzz, most recently out of TIFF. It showed there, and a lot of people had praised for it. Jennifer Lopez in particular. And Yes, she is great in this movie.

One of her best performances, possibly her best. She has a jaw-dropping opening scene. It’s a very physically demanding role.

But it’s also a challenging role in that she has to appear effortlessly in control, despite portraying a character that many people will look down upon.

But this character is extremely smart and very savvy from a business perspective and knows how to make hundreds of thousands of dollars barely lifting a finger.  And so you kind of had to sit back and respect that even if they’re committing crimes.

I read the entire article by Jessica Pressler after seeing the film, and it’s a fascinating read. The film does stay pretty true to that article. Even though Jessica admits while writing the article that her main subject known as Rosy, it doesn’t always tell the truth.

So it’s sort of unclear exactly how much is exaggerated or not. But whatever the truth may be, this film remains pretty true to the article.

Still keeping with the positives, this movie has a lot of energy. It’s a pretty fast-moving movie. It actually is pretty hilarious at times.

And I really want to see what else, Lorene Scafaria, because she’s super talented. It’s a really well-shot movie.

Although there are some scenes that do feel sort of like they rushed them. The club and bar scenes are so beautifully shot that when other sequences feel like they were done in a couple of takes and really rushed, it stands out.

The first Act of the film I really liked because it’s Jennifer Lopez’s character taking in this new girl under her wing. But once the year 2008 rolls around because this movie does take place in the past few years and the stock market crash happens.

These women start to lose a lot of their best clients, Wall Street brokers who would come in and just spend thousands and thousands of dollars every night, so they look to make money in other ways.

If you don’t know the true story, I’m gonna get into that here. So if you really don’t want to know anything about the movie, that’s your warning. I don’t really consider it a spoiler.

They decide to start drugging their clients’ drinks, and the men pass out or become extremely drowsy and just pass off their financial information to these girls.

And they steal tens of thousands of dollars from them. And this goes on for a while. And this really happened. It’s fucking crazy.

This second Act can get a bit repetitive. It’s a lot of rinse and repeat, they’re at a bar, they got a guy in the same corner.

We do a whip pan over to the girls coming in, they drug him, they do things with him, and they steal his money. And this happens a lot over and over, and it did start to get a bit repetitive.

Now I understand that this is what happened, and this is sort of the really exciting aspect of this story, but I wish they found other ways for these scenes to happen.

It’s always just them in a bar in the exact same corner doing the same thing. And even if that means stretching the bounds of reality a little bit just to have these things happen in other locations, or at least make things a little fresh, sometimes, I think that could have helped with the pacing.

And as the film progressed, I figured at some point there would be consequences for these actions, because, Yes, they’re terrible. You shouldn’t drug people and steal money from them, even if they’re assholes.

Nobody has any sympathy for these Wall Street brokers who were involved in the 2008 stock market crash. I mean they are criminals, too, as far as I’m concerned.

And so it’s not like you give a shit about these characters. It’s just that, you know, eventually, there’s going to be some kind of consequences for our protagonists. And again, if you know the real-life story there is.

But the film doesn’t really have much of an interest in that. I wish the movie had a little more of a mature exploration of what these women were feeling inside while doing these things.

It kind of glosses over that and goes for a more comical route, which I thought was a bit disappointing. I thought that was a pretty interesting opportunity to really get into these characters’ minds and see what’s going on.

And the film stays away from that and tries to maintain its entertainment value, which to me, was a disappointment.

The way the film wraps up. It portrays things a little bit too Hollywood for my tastes. If you actually look into what some of these women are doing today.

The woman that Jennifer Lopez is portraying Samantha, has tried to Sue the production company, saying that they stole her story and it’s not true, and they’re misrepresenting her and she’s not happy.

And it just seems a little too clean and perfect by making everything seem happier than it is in real life. I think that was a bit of a missed opportunity.

But still, Jennifer Lopez is really damn good in this movie. I’ve been hearing a lot of buzz about her, and she didn’t disappoint at all.

Most of the cast is pretty good, too, although a lot of them are just playing sort of exaggerated versions of their real-life personas, like Cardi B, for instance. And there’s a cameo in this movie that I thought was really out of place, too.

That didn’t have any basis in the original article to my Remembrance, and it just sort of felt like Jennifer Lopez called in a favor from a friend. So this movie could have been great. 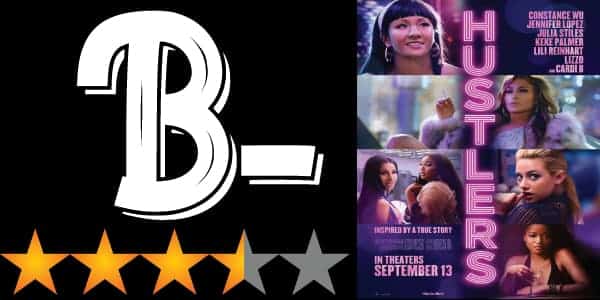 Guys thank you so much as always for reading the review of Hustlers movie (2019). See you next time.