Hudson movie is a comedy-drama film by Sean Daniel Cunningham. The film is rated PG-13 and it is an hour and 15 minutes.

Hudson is releasing on Amazon, Apple TV, and On-Demand on September 21st.

It stars David Neal Levin from Escape at Dannemora, Homeland and Billions, Gregory Lay from The Adjustment Bureau and Blue Bloods, and Mary Catherine Greenawalt from Kat Loves La.

So here’s the synopsis. After learning about his mother’s death, Hudson, a reclusive but charming man embarks on a journey with his distant cousin to scatter his mother’s Ashes in the Hudson Valley under a very special tree that they both played around when they were little kids.

So along the way, they meet an unusual hitchhiker and their simple road trip turns into a dysfunctional adventure of self-discovery mini-golf and a broken Volvo.

So there were plenty of things that I really got a kick out of, and the things that I liked include the fact that indie movies are known for their quirky endearing characters, right? And this movie doesn’t disappoint in that regard.

It’s made the rounds at quite a few film festivals, earning fans along the way. David Neal Levin has a certain lovable Zach Galifianakis quality and style about him that makes him immediately endearing.

Gregory Lay’s character appears to have it all together, but you appreciate him, even more, when you slowly learn that that’s not necessarily true.

He also co-wrote the film with director Sean Daniel Cunningham. So that’s awesome. I always love that. A little combo action going on there.

Mary Catherine Greenawalt provides a much-needed buffer between these two cousins and offers a whimsical freshness to the scenes. I’ve never seen her in anything before, but I’d like to see more I really liked her. Just I took to her immediately.

There’s lovely cinematography. As we travel through upstate New York in the fall, we get to see those beautiful fall leave, colors change, and fall to the ground. And it’s just beautiful.

I love how the movie focuses on the simple pleasures of life in its easy, breezy journey. And seeing the fall colors, the leaves change is one of those simple pleasures that you don’t really talk about in the movie, but you definitely see it.

For an indie film, I think it looks and feels much bigger than it does, and it kind of feels like a movie that you would expect to see in theaters. Very well done.

There’s a lovely soundtrack, and I think that the film is shot really well, very simple and understated. There’s a lot of stumbling in the movie. I mean, actual stumbling.

Now, it could be meant as a deep symbol of where these characters are in their lives or simply as a whimsical gag that causes us to kind of giggle a little bit inside. I don’t know which one it is.

Director Cunningham was inspired by John Hughes The Breakfast Club, and explained, quote, we wanted to do a throwback 90 style movie where it’s feel good.

It doesn’t get out of the light area so anyone can watch it. And I agree that’s a really good description of it.

And although it’s not just light and dumb, there are some profound lessons to be learned. So actress Greenwalt agreed.

There’s also a child, like quality to the movie, which perfectly matches the theme of these two cousins coming back together to reminisce about their own childhood, as well as how they currently relate to each other in terms of jealousy and competition and judging one another and that kind of thing.

Some viewers might complain that nothing happens in the story. You have to remember that the plot is intentionally simple, but that the characters are much more complex and worth exploring.

Not everyone enjoys that kind of movie, and that’s okay. It’s just not everyone’s cup of tea.

There are a few wobbly Cam moments that only accomplished to make me dizzy and annoyed. You know, it’d be like normal filmmaking. And then all of a sudden things would jumble. And I’m like why I didn’t like that.

And then there’s just a lot of really awkward moments. Some people will translate that as really fun humor, and others will just feel uncomfortable. So just embrace the awkward moments.

It’s an adult-talking movie in a character study of sorts, and kids are going to be wanting action and want something to happen. There is some light profanity, but other than that, there’s nothing super objectionable, some bickering and that kind of stuff.

Some of the themes that are presented very well are family, death and mourning, friendship and support, reliving the past, uncertainty about the future, jealousy, and the fact that it’s the journey that truly matters in life, not the destination.

I think it really represents the indie films and it’s done very, very well, but a heads up on the humor. It doesn’t land for everybody.

So I am going to give Hudson movie a B-Plus. 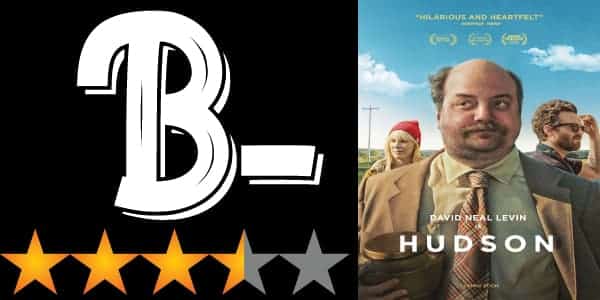 Guys thank you so much as always for reading the review of Hudson movie. See you next time.