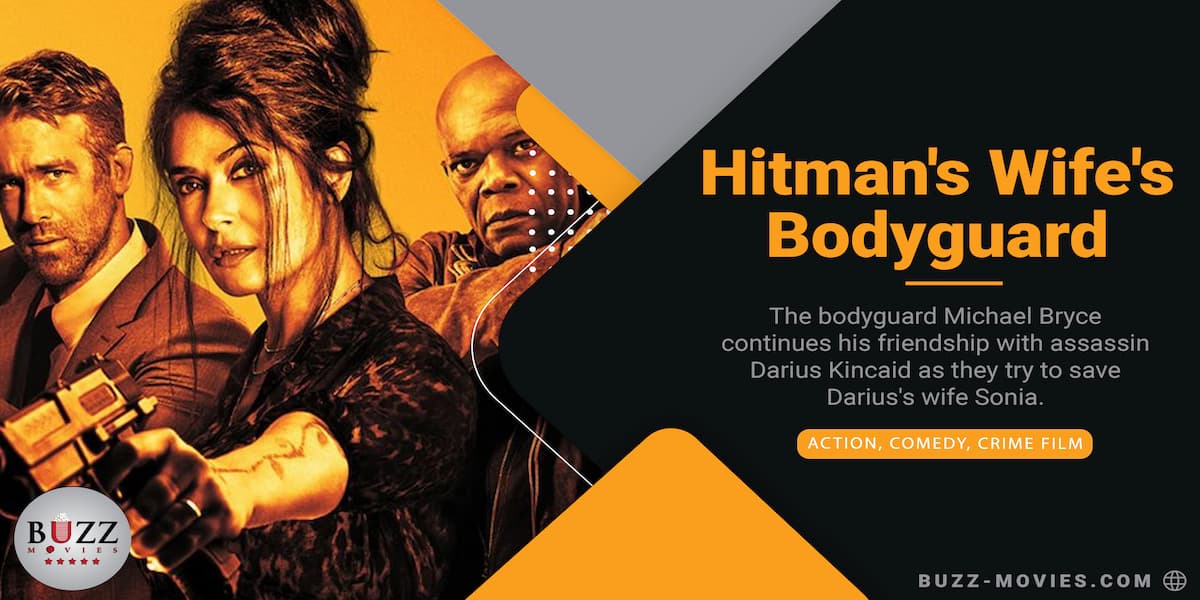 The Hitman’s Wife’s Bodyguard 2021 is an American action comedy film directed by Patrick Hughes. The film is a sequel to the 2017 film The Hitman’s Bodyguard.

Hitman’s Wife’s Bodyguard is an American action comedy film directed by Patrick Hughes and written by Tom O’Connor and Brandon and Phillip Murphy.

The bodyguard Michael Bryce continues his friendship with assassin Darius Kincaid as they tried to save Darius’s wife Sonia.

The Hitman’s Bodyguard surprised everyone when it became a worldwide hit in 2017, raking in a hundred and seventy-six million on a 30 million dollar budget.

Of course, that means we are going to get a sequel, and even though I know the original has its fans heck, I even enjoyed it for what it was. I don’t know how many people were clamoring to see these characters reunite on the big screen.

And though I must admit that I did have some fun with this sequel, there are so many issues that are hard to look past.

The film opens with Ryan Reynolds as Michael Bryce as he is seeking therapy for the events that occurred in the first film. He decides to quit being a bodyguard and give up on guns and violence altogether.

But we all know that won’t last for long. He rendezvous with Salma Hayek as Sonia Kincaid, and she seeks his help to save Darius, who’s been caught up in a sticky situation.

This then throws the trio in between Interpol and a nefarious madman who wants to literally drill into Europe’s main electrical network to destroy and rip apart the country.

OK, so we all know we’re not here for the plot. We are here to see these veteran actors working together, showing off their charisma, bantering back and forth, and kicking some ass.

And there is honestly no other film that I can think of that is so blatantly unashamed to solely rest on their laurels of its cast.

But luckily, somehow, Director Patrick Hughes, as he did in the first installment, has been able to assemble one of the most likable and talented cast in the business.

The main trio is really able to do so much with these thinly drawn characters and would use just allows them to do their thing. The film succeeds.

Jackson and Reynolds are hilarious together. Their banter is fast and furious and hits hard often. But unfortunately, they don’t get nearly as much back and forth with each other as they did in the first.

Salma Hayek seemingly having a blast and gets much more screen time in this installment, though sometimes with ferocity, was almost too much for me.

Antonio Banderas is absolutely hamming it up here but is also a villain than a very angry Liberace, which the film does poke fun at.

The rest of the cast is pretty much wasted, especially Grillo, who needs to stop giving in and taking these thankless supporting roles. The guy is a star and when he is given the right material, he shines. But this is just not it.

What really works with this film is the comedy, even though there is a lot of low-hanging fruit humor that falls completely flat as well. When Hughes lets loose and goes full-on tongue in cheek with the farce, it really works.

Sometimes he lets his actors go there and these moments produce genuine laughs. And judging upon my theatergoing experience where the theater was erupting in laughter throughout the entirety of the film, general audiences are really going to respond well to this humor.

This time around, I found the action to be altogether lackluster. The direction by Hughes is so lazy and lacks any kind of energy.

The car chases, the hand-to-hand combat, the gunplay, all of it is just Matt and I know the original is no action classic, but at least it felt like they were really trying to create something exciting here.

It’s as if they felt obligated to insert action scenes into the movie because they first had them when they really just wanted to make a comedy.

Also, there is some of the worst CGI I have ever seen in a mainstream movie here. I’m not going to go down a checklist of awful visual effects.

But let’s just say that there is a scene with some superfluous butterflies that look straight out of a PS2 game. I cannot fathom how the ok these effects to be in the finished product.

Hitman’s Wife’s Bodyguard is not going to win over anyone who didn’t love the original. Because let’s face it, that one wasn’t even that amazing, to begin with. And I would say that this is a step down from that.

But I have to be honest here and say that I did have a fun enough time while I was watching it, even if I will forget it in the morning.

So I am going to give Hitman’s Wife’s Bodyguard 2021 film a C-Minus. 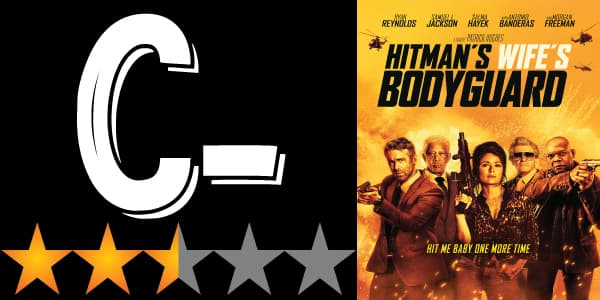 The Hitman’s Wife’s Bodyguard 2021 movie will be in theaters Wednesday, June 16th. So if you got a chance to watch let me now your opinion in the comments bellow.

This is a film that relies solely on its cast to do all of the work, and luckily they do allow for some fun and ridiculous comedy during its run time. But the lazy direction, asinine plot, and lackluster action make it a forgettable and unnecessary sequel.

Guys thank you so much as usual for reading the review of Hitman’s Wife’s Bodyguard 2021. See you next time.