Today, we’re going to be going over the new horror thriller held 2020 movie. It’s a game of survival for a couple who have no idea where they are being held or why.

Does it rise above the rest of the more recent films that have come out in the genre? Let’s find out.

A couple’s fragile marriage is put to the test when they are held hostage in an isolated vacation rental by an unseen Voice that commands their every move.

Going into this movie. I had zero idea what it was about besides the fact that it was in the horror genre. And it’s always so nice to go into a film blindly and be immediately pleasantly surprised by its production values.

For such a low-budget horror film, held is extremely slick, well shot with minimalist but effective production design and solid performances from a relatively unknown cast.

Emma Henry’s marriage has been failing for a while, and this anniversary vacation is supposed to help mend their relationship.

But this is a horror movie, so they are drugged, implanted with devices that burst their eardrums any time they do anything out of order, and forced by their captor to face the issues of their marriage and act like a married couple should

I think that this setup is really ingenious and makes way for a lot of really uncomfortable and anxiety-ridden scenes.

I also thought that I knew where this movie was going with a saw-like twist that explains why the captor or captors were going through with this awful type of torture. But I was dead wrong.

And it’s always really nice to not be able to guess what the outcome of a film is, especially when we feel like we’ve already seen everything before.

Our lead heroine, Emma, who’s played by Jill Aubry, who also wrote the film, is refreshingly intelligent and does not fall into any of the character tropes of the genre.

There is also a small backstory to her character at the beginning of the movie that adds emotional weight to Emma, making the audience empathize for her and root for her in a way that does not feel forced.

In this case, a little character development went a long way. I can’t say that for her husband, Henry. However, I really do wish his character had been fleshed out a little bit more.

If you’re going into held expecting to be scared out of your mind, you’re going to be sorely disappointed. This film is much more of a thriller relying on suspense to keep us engaged rather than jump scares or shocks.

The villain here is also not nearly as menacing as he could have been, frightening mask aside.

There was not a single moment during this film’s runtime that I thought these two couldn’t take him down. But that does work in helds favor as it progresses.

Honestly, my only real qualm with this movie is the fact that I think it’s a tad forgettable like it’s going to get lost in the shuffle of all of the hundreds of horror thrillers that come out every single year.

And by no means is that the film’s fault. It’s just a tough genre to contend it. 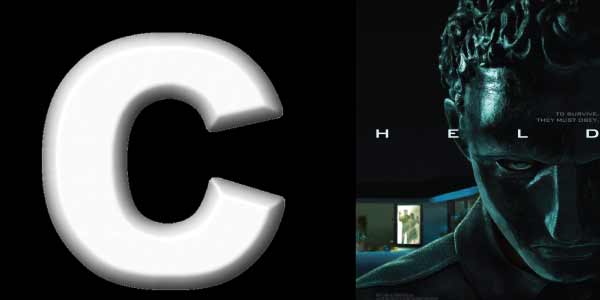 Although a bit forgettable. You could do so much worse than held 2020 horror film.  It will be available to stream wherever you rent your movies this Friday, April 9th. So check it out and comment with your opinion.

Held 2020 is a tough unpredictable and ingenious little horror-thriller that really did provide me with all of the thrills that I was seeking.

Thank you so much, everyone, for reading Held 2020 horror film review. See you soon.

Check out the movie trailer to see if you can figure out why they are being held.