Gully 2021 is a new Mystery, Thriller, Drama, Crime film by Nabil Elderkin. It is a disastrous and confusing drama film.

The film is about three teens living in LA, all victims of extreme childhoods, wreak a hedonistic riot across the city over the course of 48 hours, unbound by societal norms. They take us on a rip-roaring ride of drugs and murder across Los Angeles.

I don’t know from where should I start talking about this film. I am somehow confused about it. And I didn’t want to review it cuz I didn’t like it much. But since I have got the chance to watch it I think I must write about it.

The Gully movie almost seems to be pointing a finger at video game culture just like the guys who are lost in their games today and let the real world slip away. As the guys head out on their rampage, Elderkin pops up video game images out of “Grand Theft Auto V,” indicating on-screen how many pills the guys just jacked their arms full of and how they have now reached a new “rank.”

As with many elements in this movie, this concept is underdeveloped thematically and then barely utilized. Gully 2021 becomes a story of randomly connected acts of violence. The guys follow a couple after a road rage incident and terrorize them in their home. They rob tourists.

They enact vengeance on someone who has been abusing Jesse. None of it adds up to much. None of it has any weight. Is that the point? These lives of violence continue to breed violence? Gully 2021 movie is either unfocused or oversimplified.

The film is either underlining its themes—especially through a “wise homeless man” played by Howard—or unable to figure out what it’s trying to say at all.

The script is nihilistic, piling one traumatic event on top of another, and it’s all meaningless without a feeling that an audience can connect to. I think they could have work more on it and make it better than this. 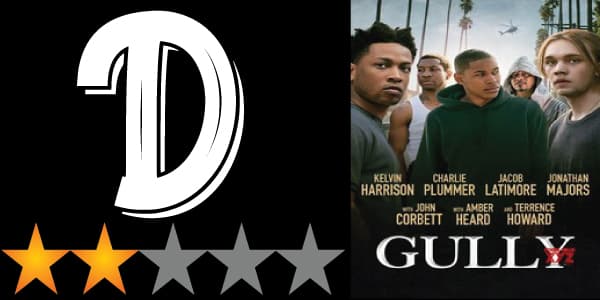 The film was released on Jun 4, 2021, so if you got the chance to see it don’t forget to share your thoughts about the film in the comments below.

Guys thank you so much for reading the review of the new movie Gully. See you next time.
Gully 2021 Movie Trailer

The X-Files: Fight the Future