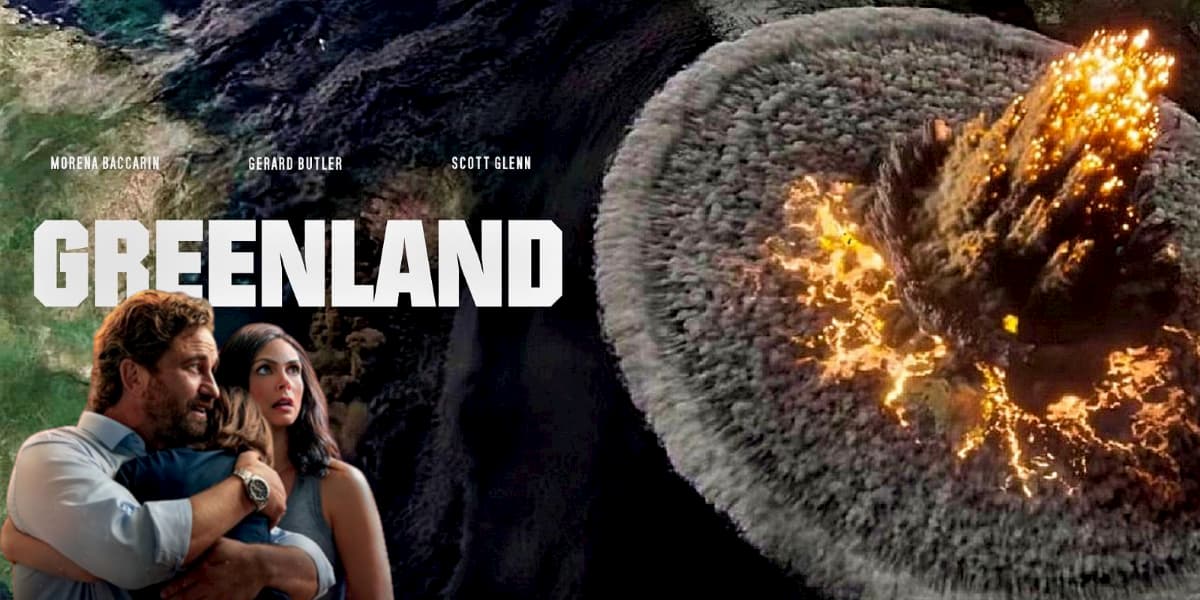 Greenland Movie is a 2020 American disaster film that tells a story of a family struggles for survival in the face of a cataclysmic natural disaster.

Greenland Movie stars Gerard Butler and is yet again another attempt for him at a disaster films. Last one geo storm was bad.

This comes in the director of angel has fallen as well as shot caller. The comment is hurtling toward earth and originally scientists believe that it’s just kind of gonna pass by.

Some fragments might burn up in the atmosphere, but eventually those fragments chip away and endanger the lives of almost everyone on the planet. So Gerard Butler in as family or trying to flee to safety.

When I sat down to watch this movie. I didn’t really think I was going to be in for any type of high art. I just wanted to watch a fun disposable disaster film. I was thinking about movies like Armageddon or The day after tomorrow and surprisingly the film is more serious than I expected it to be and not really in a hammy way.

A lot of it is because the film is actually mid budget range and you don’t get that much at all anymore. In fact, that’s very rare. I immediately like that about the film.

You don’t get a lot of mid budget range movies anymore. Everything’s either a $5000000 horror film or a Marvel movie.

The fact this movie was made for I don’t know what 30-40 million dollar whatever it is. It allow them to do more things with character while also having a lot of C. G. I. spectacle.

But the film chooses not to focus that much on it and I don’t think it’s just because of budget reasons.

They focus heavily on character in Greenland, and for that reason the movie is a lot better than I thought it was going to be.

I still have a lot of issues with the film and most of them are towards the last half. The set up for the film is really where the strengths lie.

You see it from the perspective of a family that’s actually watching it on the news and because of that you feel the reaction in the room.

You stay with this family for the whole movie and so you don’t really go away to a military room where a bunch of people are pressing buttons, and things you don’t understand, and waving forms around, and walking down hallways really fast.

You stay with the family the whole time. You don’t go to other countries where random people you don’t know are running away from explosions or tidal waves.

You stay with the family and so you always get their perspective. And for that reason it puts it above other disaster movies for me.

The first time the film was surprisingly effective, it’s mostly hand held and so it does feel pretty intense. There’s actually a lot of tension.

That starts to get old pretty fast and once we get to the inevitable conclusion which don’t worry I won’t get into.

I don’t know it all just feels sort of like yeah that was going to happen and I think that’s that’s how it happened so it happened.

You know it doesn’t really feel like there’s any surprises. It’s just a very serviceable movie that has a surprisingly effective set up.

So I thought it was actually about an asteroid the size of greenland. Hurtling towards earth, which I can push.

Still though after this crazy year we’ve had, there were a few scenes that hit differently than they would have.

There’s a scene with a first responder, like a doctor or a nurse they don’t really clarify who provides the characters with some very important medicine for their son.

And I remember just thinking Like that just that hits differently this year, because we’ve seen so many healthcare professionals risking their lives and doing crazy awesome things and dealing with a lot of persecution this year.

And I know that scene was really heartwarming it probably never would have been. If it hadn’t been for this crazy year.

Also I have to say the kid in the movie is smart. He doesn’t do stupid things and when he is in peril you believe it.

It doesn’t feel set up it doesn’t feel like he’s just like being a kid actor. He’s he’s really good in the film, but he makes choices for like good job kid like you did a good thing.

You know a lot of times in movies the writer uses the kid to make things happen because the kid is an experience of the kid is stupid and they think well the kindle do this dumb choice and that will lead to some tension. Not here that the writing for the kid is actually really smart.

Overall this movie surprised me. is it great? no. It’s got a lot of structural issues for the last half and it gets very repetitive and there’s basically no surprises.

But I liked the movie did not rely on C. G. I  and it actually focuses on the family for the most part, which heightened the tension for me.

I’m gonna give Greenland Movie a B-minus. Guys, thank you so much as always for reading my reviews. Look forward to more reviews very soon.