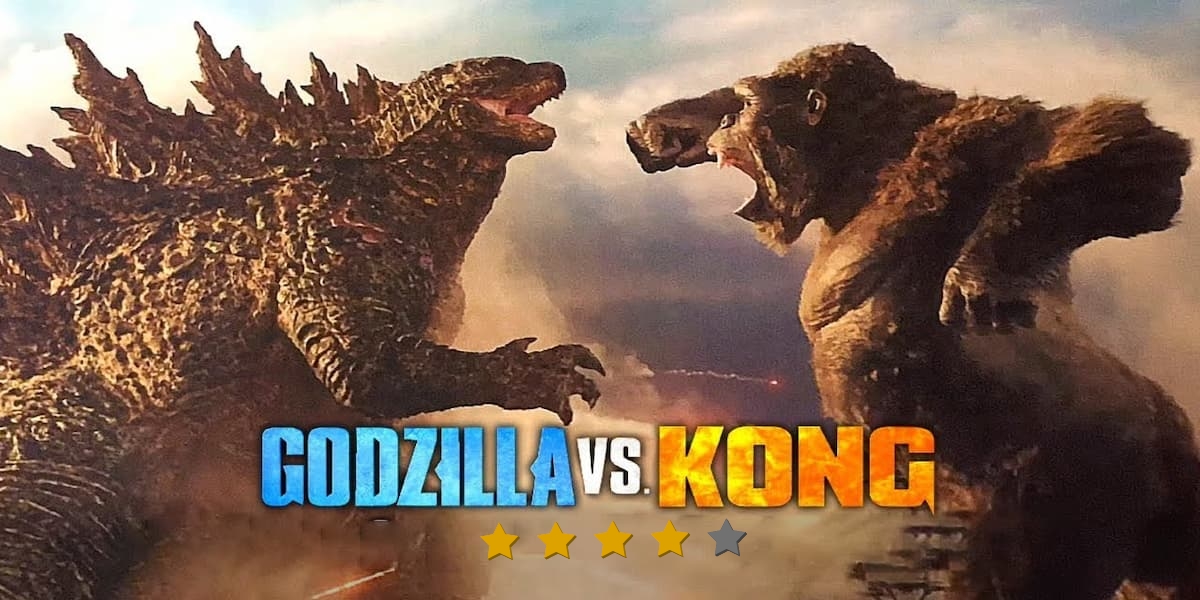 Godzilla vs Kong 2021 is an hour and fifty-three action, Sci-fi,  American monster film that you are going to enjoy watching.

Godzilla vs Kong is directed by Adam Wyngarde and as you might expect, is a movie where Godzilla and Kong fight. Take all of my money now.

Basically, some scientists are trying to find a location that is of myth, they believe that Kong could perhaps lead them to it. And Godzilla is out in the world wreaking havoc and killing people. So folks are confused.

Godzilla tends to be someone who kind of balances the scales of justice and does the right thing. So why does it appear that he’s killing innocent people? And, of course, eventually, these two titans are going to sort some shit out.

Quick back story that VHS, King Kong versus Godzilla was on repeat constantly when I was in elementary school. It’s a very cheesy movie, admittedly, especially if you watch the American version. But that little kid didn’t give a shit. He loved it and he watched it all the time. And that kid that’s still inside me had a big cheesy grin throughout almost this entire film.

I really had a good time with Godzilla versus Kong because it basically gives you exactly what you want. It doesn’t overstay its welcome. It’s a very tightly paced movie and that it’s the shortest so far in this most recent series of Godzilla and King Kong films.

The movie doesn’t waste too much time with things that you might not necessarily care about, and it doesn’t have a grand aspiration towards really anything else than entertaining the hell out of you. With a series of epic bouts between Godzilla and Kong, they do not disappoint.

That’s what you want to see. That’s what’s on the poster. The movie delivers that hundred percent, especially in the latter half.

The second half of the movie is almost nonstop Kong and Godzilla stuff, and it’s really exciting and fun.

Noone complains that’s been thrown around a lot for these recent Kong and Godzilla movies. And I’ve certainly said it is that the human characters are kind of boring. Most people watch these movies for the Titans and we all know that.

But it would still be nice if you kind of cared about the little ants that are walking around on the ground.

This movie is very self-aware and that it does the bare minimum basics for the human characters. It establishes the characters, their motivations, their goals.

Why are they in this movie? Why are they doing what they’re doing? And it gives traits to each one of them. Some are overly serious, some are very funny, some are paranoid, and some characters cancel each other out.

Brian Tyree Henry was very funny as a conspiratorial podcast host who has a lot of thoughts about what the government is doing and some of them end up being true. They’re getting to watch him discover that his paranoid rantings on the Internet are actually fact was very funny. But Julienne Dennison, who I loved in Hunt for the Wylder people, is also there for Comic Relief.

And those two characters are sort of on a side quest with Millie, Bobby Brown’s character. And sometimes it feels like the movie stops when we’re with them.

Eventually, there’s a concrete reason for them being in the movie and the characters are entertaining. And as I said, Brian Tyree Henry is very funny and likable, and so he definitely makes his scenes very enjoyable.

But Alexander Skarsgard and Rebecca Hall are basically the main story. They’re trying to find this hidden world and Kong is leading them there. This was really smart.

But as I said, the film is extremely well-paced in that it gives you just enough of the human people because they’re really not that interesting. And what they’re trying to do can at times be a little incomprehensible.

The best way that I can describe Godzilla versus Kong is that it feels like an early 2000s movie and I mean that as a compliment.

There used to be films that were just big fun movies. And that’s it, they had the needed character development, the bare minimum basics, but the movies knew why you were there.

They were very self-aware. They didn’t have these grand aspirations to be these overly pretentious human dramas.

And I miss times like that at the movies where it just felt like you could go and have a fun time, even if it is disposable. It’s almost like the film knows it is and is totally OK with that.

Adam Weingard does so many fun things with the fight sequences in the movie. He simulates a camera that’s mounted to their arms sometimes. So when they throw punches, it creates this great sort of dizzying effect.

The fights are gorgeous. The visual effects truly have reached an amazing, amazing period like we are in the future. The look of this movie is absolutely breathtaking.

I do think there’s one missed opportunity, though. There’s an area of the film without getting into details where gravity is sort of fucked up.

There’s also one close-up of Godzilla in the film when he’s really kicking Kong’s ass that I feel like some people won’t know what to make of it. I thought it was really funny. I liked it a lot and I laughed.

But some people might think it’s out of character or something. I don’t know I liked it.

Also. Can I just say that Kyle Chandler has now been in two films with Kong that are completely separated from each other. He was in the Peter Jackson King Kong and now this. That’s so strange but cool. Good for him, man. He’s out there making the money.

So even though the human aspect of the movie, again, is just something I don’t really care that much about, there is one part of the film that I think they absolutely knocked out of the park.

There’s a young girl in the film that’s able to communicate with Kong that was absolutely the heart and soul of the movie and created some surprisingly touching moments that I did not expect.

No granted, this movie is not going to be for everybody. If you go into Godzilla versus Kong, ready to analyze the in-depth meaning and the hidden metaphors of the shots and visual implications of everyone’s state of mind, you’ll probably not like the movie. But if you just want to see Godzilla in Kong, throw punches, you’re going to have a blast.

I’m going to give Godzilla vs Kong movie a B.

You get the Best Godzilla vs Kong backgrounds 2021 now.

Guys, thank you so much, as always, for reading the Godzilla vs Kong movie review. See you next time.