Free Guy 2021 is an American science fiction action comedy film. The film is rated PG-13 and it is an hour and 55 minutes. And Free Guy will be released in theaters on August-13th.

Free Guy is a new movie that’s not based on a sequel, a prequel, a spin-off. And it’s not based on some preexisting IP. So refreshing to see that. However, is it actually worth the watch today? Let’s see.

Free Guy is directed by Shawn Levy and written by Matt Lieberman and Zak Penn, and a story by Lieberman.

However, when he meets a player named Molotov Girl, played by Jodie Comer, he realizes that I don’t want to be a background character anymore.

He’s always wanted something more in life. He always wanted to meet the girl of his dreams and to experience life to the fullest.

So he decides to help her on her quest to find the secret area in the game, or else there will be real-world consequences. But of course, Guy does not know that he’s actually part of a video game.

This is the best movie I’ve seen all year. And actually, out of all the new movies that have come out during the pandemic, this is my favorite.

Really? It’s my favorite. It was entertaining, it was funny, it was creative, it was imaginative, it was heartwarming. It was very well written, it was emotional.

And I left the theater feeling inspired. That’s everything that you’d want in a science fiction, action-comedy, fantasy film.

And there’s a love story in here, too. Remember those genuine love stories that just kind of hit you in the feels. Yeah, Free Guy has all of it.

Now, if you wanted to use the Blender example, this movie is Truman Show meets the Lego Movie meets ready player one, put it all in a blender, and you have Free Guy.

And while sure, this movie reminds me of other big movies like those movies I just mentioned. But it’s an original idea. It’s an original movie that’s not based on anything.

And this movie even has a meta element to it, because there is a section in the movie where Free City.

That’s the name of the game that Ryan Reynolds is a part of. And Antwan is the one who created the game. He wants to create the free city 2, you know, bigger, better new characters, not backwards compatible.

All right, guys, dish out your money. You need to get a brand new game.

But Joe Kiri, who works on the game, is like, Well, don’t you guys think that people want to create a new game? People want to play something brand new and take away to he’s like, no, the one thing that matters is brand recognition. And he does this joke about Kentucky Fried Chicken, which is really great.

But it’s so meta. And it’s so true about Hollywood today. We don’t wanna see this brand-new movie that’s not based on anything.

Now, I just want to say this real quick. And again, most of you guys will get mad at me for even saying this.

But they said this is another movie where you get the white heterosexual lead. The male lead, I should say, gets the sexy female white love interest. You have the black friend, and then you have the foreign bad guy. It’s a bit of a stretch there, I will admit.

So if those things bother you, right, if you need your movies to be ultra awoke, then Free Guy might not be the movie for you.

But if that stuff doesn’t really bother you guys, it doesn’t bother me. Then, yeah, keep reading this review, because I’m gonna tell you why I like this movie.

I watched Hours the Force Awakens again recently because I’m going the Galaxy’s Edge cannot wait. But Rey and Finn, you know, they’re floating back and forth.

He’s like, got a boyfriend. Cute boyfriend. And I’m like, oh, yeah, they are setting up this kind of love plot, but no fin gets in the friend zone. There can’t be any love between the main characters that’s so old school.

And then a movie like Bumble Bee, right. When the guy tries to hold Haley Seinfeld’s hand at the end and she’s like, no friend-zoned. I’m like, there’s no love in movies anymore.

And a movie like Jungle Cruise. Yeah, there’s a love story in there. But in my opinion, that felt so forced.

Here, it felt genuine. It felt really wonderful to see. And I should also mention that Disney has bought 20th Century Fox, which is now 20 Century Studios. And I think before this movie was released, Disney went back and added in some scenes in this movie where they could use their IPS. And I really think that those scenes are going to get a lot of people out of their seats.

I also want to talk about the soundtrack because most of the time in movies, you put in a pop song because it’s like, oh, that’s a popular song. The kids will know that.

But in this movie, it felt like it fit the mood. It fit the story. It was tongue and cheek, and it had me singing a little bit right underneath my breath I was singing the song. I was having my foot to the beat. And whenever a movie can do that, I know that I’m having a good time.

And it doesn’t feel forced, like Suicide Squad or something like that, where it’s like, oh, I know that song. why is it in here? But here, it really feels like it fits the mood in the story.

But on a technical level, the screenplay was tight. It was extremely well written. There were setups and payoffs, and everything felt established and earned.

There wasn’t that one scene where it’s like, oh, let’s just introduce this now because we need to get out of a sticky situation. And it’s like, Why in the world is this year.

But every single character had a motivation. They felt developed. They felt earned. It was really well written.

And the comedy had me laughing a couple of times in these big blockbusters. I’ll chuckle, and sometimes the humor feels like it’s going very low-brow for the lowest common denominator.

I laughed out loud many times in this movie, and it’s not all just Ryan Reynolds. He’s great in the movie. He’s always funny, but a lot of characters have a lot of great moments in this movie.

And of course, Joe Keery and Jodie Comer. They’re also great in this movie as well. But Taika Waititi I think he really steals the show as well.

He is your funny villain, but he’s also intimidating, right? In this movie, there actually are some stakes. There’s some personal connection with the villain that makes you hate him. He’s a really great villain. He did a great job in the movie. Also just a great job from the entire cast.

The reason why I’m giving this movie a high rate and here is a spoiler alert. It’s because this movie made me feel like a kid again. It made me remember why I love movies in the first place.

Like, I know people who have seen The Suicide Squad in theaters five times. And when I saw it, I’m like, yeah, it’s a superhero film. We get so many of those. I’m kind of done with superhero films. Jungle Cruise, I feel like this movie was made in a factory. It didn’t feel genuine.

It didn’t have any heart. And I’m thinking like, am I just losing touch with myself? Do I really want to do this? Do I really wanna review Hollywood movies that are just bland and kind of boring?

Then Free guy comes out, I watch this movie, and then afterward, I’m like, I want to go home. I want to write my review. I cannot wait to tell people about it. I felt energetic. I felt alive.

I felt uplifted, I felt inspired. And I’m like, I forgot that movies could do this. I’ve just been seeing so many mediocre movies and people like them. You know, that’s totally fine. But I’m like, I don’t know what’s going on here.

And I’m finally glad to say that a movie has hit me as well as Free Guy did. So for me, it’s one of the best movies this year.

I really hope that this movie does well because if it does, it tells Hollywood that audiences want original ideas. Yes. Video game world. Sure. A lot of references to things.

There are no real original ideas, right? Even Star Wars back in the 70s have taken things from Westerns and Samurai films.

So with all of that being said, I think this movie deserves a high rate and that’s my opinion and you might not agree with me. But I somehow enjoyed this movie and had a lot of fun watching it. 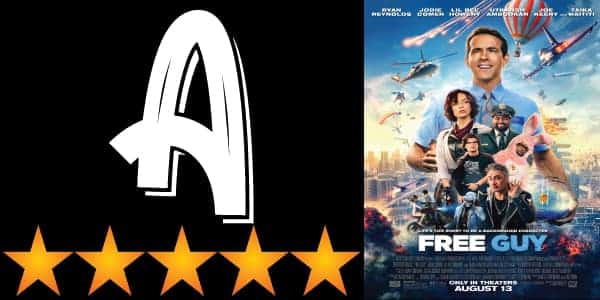 Guys thank you so much as always for reading the review of the Free Guy 2021 film. See you next time.

Check out the trailer of the new Action, Comedy, and Sci-Fi film, Free Guy.