Four Good Days is a 2020 American drama film, where A mother helps her daughter work through four crucial days of recovery from substance abuse.

This is a film about addiction and the opioid crisis, which we have seen a lot recently. So does it provide anything new? Let’s check it out.

A mother helps her daughter work through four crucial days of recovery from substance abuse.

So we have gotten a slew of addiction dramas in the last couple of years. Like Beautiful Boy, Ben is back, body brokers and six balloons, among many, many others.

But most of these movies have all followed young men dealing with this struggle. So it was really refreshing to get a female’s perspective of addiction and also add in the mother-daughter relationship to the movie. And we have a really unique spin on this story in four good days.

Mila Kunis plays Molly, a 31-year-old who has been dealing with heroin addiction for the last 10 years and has gone in and out of rehab 14 times.

She shows up on her mother’s doorstep. Of course, this mother is played by the undeniably talented Glenn Close. And Molly asks for her mother’s help one last time to get to rehab.

Her Medicare pays for three days in the facility, but then she must survive four days out in the world without using until she can get a shot that makes her immune to the drugs.

Four Good Days Chronicles, you guessed it, these tumultuous four days of her trying to curb her cravings and say no to drugs.

I am sure most people will be going into this film looking for powerhouse performances from Glenn Close and Mila Kunis. And although I think both are effective, I don’t think either of them gives performances that will move anyone to their core.

Glenn Close the role almost unhinged at times. You never know what reaction you’re going to get from Deb. She’s definitely a mom you would never want to mess with. But she is also able to convey this tired and fed up, yet still loving persona.

Glenn Close does what she can with the role. But just as her performance in Hillbilly Elegy, I think the writing does let her down.

Mila Kunis also does give it her all her inclose have some really touching and raw moments together. And I do appreciate their relationship in the film. But there was not a single second during this movie that I bought her as a drug addict.

The filmmakers do everything in their power to make her look like someone who has been doing heroin for ten years, extreme makeup, ratty hair, prosthetic teeth and disheveled clothing.

But it all comes off as trying too hard and going a little overboard. And Kunis, although fully committed, cannot capture the character fully.

As for the directing from Rodrigo Garcia, there is just something that is so bland and sanitized about this movie.

The film is also a total drag to watch. And I know what you’re thinking. Of course, it is. No one would suspect otherwise from a film about this type of subject matter.

But what I mean is, is that it just drags on and on and on. It is such a slog to watch that I checked my phone thinking that it had to almost be over and we hadn’t even cracked the hour mark yet.

There is so much that happens in the movie during these four days. Yet also it feels like nothing is actually happening. Also, it doesn’t take any chances with its narrative or the way in which it’s filmed.

It’s just another straightforward addiction drama with a different kind of relationship at its center. I couldn’t help but think that this could easily be a Lifetime movie if it wasn’t for its leading ladies.

These recent addiction dramas, like the ones I named some moments ago and this one have all had varying degrees of success.

But I can’t help but feel like all of them have something in common. They are telling a story about something that nearly every human has been affected by some time in their life.

We’ve all known or known of someone who has dealt with addiction and the repercussions that said addiction has on everyone else around them.

This is unfortunately a universal story that I don’t think has been told gracefully or with complete honesty, rather, through the squeaky clean lens of a studio head who is afraid to take risks and tell the story how it really is.

Now, please don’t get me wrong. I do believe that for good days has the best of intentions and it’s definitely not trying to extrim the stories of people who have gone through this experience, but it never takes that leap of faith that its audience can actually handle and endure the hard truths of addiction.

So I am going to give Four Good Days Movie a D+. 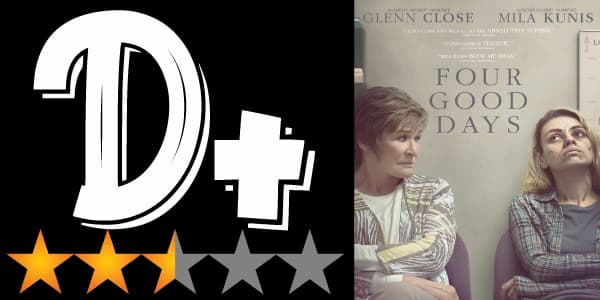 although this film means well and our two leading ladies do the best they can with the material Four Good Days is a bland and sanitized addiction tale that is unwilling to take any risks with its subject material.

Guys thank you so much for reading the review of Four Good Days Movie. See you next time.

A mother helps her daughter work through four crucial days of recovery from substance abuse. Check out the trailer of the Four Good Days Movie.

Top 10 Most Confusing Movies Ever Made