As if getting pregnant weren’t complicated enough, Lucy sets out to uncover the unsettling truth about her fertility doctor.

Throughout the years, many comedic actors have turned to horror, much of the time to great success. Which goes to show you that the line between the two genres is quite blurred indeed.

The greatest success in recent years has been that of Jordan Peele, whose get out and us were able to mix timely and socially impactful issues with Twilight Zone, like horror to the audience and critical acclaim.

While Ilana Glazer’s jumped to the genre does not go as smoothly, it is still a valiant effort and ineffectively creeky mood piece.

The film follows Lucy, a young woman who has been having extreme difficulties trying to get pregnant. Her husband, Adrian, recommends a fertility doctor who has had great success in the past with providing his clients with the children that they have always wanted.

Lucy is artificially inseminated and voila, she is finally pregnant like she has always wanted. She should be happy, right? Well, she’s not,

Because even though everyone is blaming her mommy brain for her out-of-character episodes and forgetfulness, she feels like she is going crazy by suspecting that her fertility doctor is up to something very sinister.

One of the best things I can say about false positive is how beautifully shot and composed it is. The brilliantly effective lighting with the juxtaposition between brightness and pitch black, the disorienting camerawork, the sterility of the doctor’s office, adding this sick, twisted feel to it, the incredible score that keeps the tension building at all times, the craft on display here is truly magnificent.

If anything, False Positive film is a movie that is able to create a mood of terror, anxiety, and uncomfortable pity and keep with it throughout the entire runtime.

Going into this film, I was really curious as to how Glazer would be able to carry this dramatic role. Even though the actress has been in feature films before with the night before and rough night,She has never had a film rest on her shoulders.

Especially one with this kind of heavy material and with a great deal of happiness, I can say that she is fantastic in the movie.

She pulls it off every step of the way, the uneasiness, the dread, the psychosis, her performance pulses with these things, and the fact that you have such empathy and care for her character as well just goes to show you how truly effective she is here.

Pierce Brosnan was also the perfect choice as the sinister Doctor  Hindle. He almost reaches a level of hamming it up, but never eclipses to the point of coming off silly.

I fully bought him as this ominous villain who is also so charming that no one would ever expect him of wrongdoing.

Unfortunately, Justin Theroux who I love is just not given a whole lot of material here to create a character that you can invest in.

He’s mostly there as a side piece and we never really get into his psyche to understand what’s going on with him through this experience.

Ilana Glazer and Justin Theroux do have nice chemistry with each other, though I just wish his written material was weightier.

Both positive is the type of horror that is dripping with dread, disorienting in a way that you have no idea what is real and what is not. And it truly makes you feel unsettled.

It is also an intelligence statement piece on the problematic issues of male dominance, which permeates throughout the film’s narrative.

What does not work for me, however, is the fact that this film is so utterly predictable. Just from watching the trailers, I was able to catch on to the big twist and the other supposed surprise in the film. I figured it out at the very beginning when they were setting it up.

Well, it all works for the story at hand. It is a real shame that Glazer and Lee were not able to come up with something more shocking.

I also was hoping for this film to be a little bit less of a straightforward psychological horror with the talent behind shows like Xavier: Renegade Angel, Wonder Showzen, and Broad City. I was expecting this to be a little bit more of a fresh, unique, and weird twist on the genre.

I do have to give the film credit for this, though. The way the finale plays out does end up being trippy and a little bit unexpected. I couldn’t help but wish the entire film was like that though.

So I am going to give  False Positive  Movie a C. 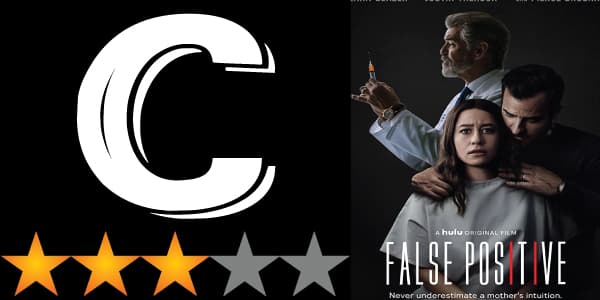 False Positive is like a really solid but predictable episode of The Twilight Zone. It has a nice concept with underlying social issues, it’s creepy and it’s filled with dread, but it also has the impact of a 40-minute episode, not a feature film.

False Positive horror film will be streaming exclusively on Hulu Friday, June 25th. So if you got the chance to watch it comment bellow your opinion about it.

Guys thank you so much as always for reading the review of False Positive 2021 horror movie. See you next time.

Check out the trailer of the new horror, mystery & thriller film, False Positive 2021.