Escape Room Tournament of the Champions is psychological horror, action, thriller film that is going to be available in theaters and some VOD platforms on July 16th, 2021. It’s rated PG 13, and it’s a quick one hour and 28 minutes. So is it worth your time?

Six people unwittingly find themselves locked in another series of escape rooms, slowly uncovering what they have in common to survive. Joining forces with two of the original survivors, they soon discover they’ve all played the game before.

This is the sequel to the first Escape Room, which was a movie that I actually thought was pretty fresh and fun. If you saw and like the first one that came out in 2019, you’ll probably like this one.

Because it’s basically more of the same, although I think this one is much more inferior in many ways. And I’ll get into that in just a minute.

In this installment in the franchise, six people willingly find themselves locked in another series of Escape Rooms, quickly uncovering the fact that they’re all survivors from other Escape Room games.

So joining forces with two of the original survivors from the first movie, they get killed off one at a time until and I don’t want to give you any spoilers.

Let’s talk about the things I like about this movie. First of all, the introduction of the film shows clips from the very first Escape Room movie just to kind of remind you of what happened and who survived.

And some of the scoop of that. The film picks up a short time after the first movie, not too much longer, and Unfortunately, the movie starts off pretty slowly.

There are those quick clips to kind of start to build the excitement, and then it turns into nothing for about 20 minutes. So that’s sort of depressing.

If you love solving puzzles and mysteries, you’re probably going to get a kick out of this movie. But I’m going to tell you more about that in just a second, too.

The first film was marketed as a horror type of a thriller, but this movie is much less gruesome and less horrific, maybe because you kind of are mentally prepared for everybody to die off.

I don’t know if it just didn’t seem that bad, but there’s a reason why, and I’ll tell you more about that in a second.

The cast includes Taylor Russell and Logan Miller from the first movie as well. As the new additions, who are Indya Moore, Holland Roden, Isabel Ferman, Carlito Olivero, and Thomas Cocquerel.

It’s suspenseful and you definitely feel some tension with almost non-stop action. The movie flies by really quickly, and then there’s a twist. I love twists.

Let’s talk about the things I didn’t like because that list is much longer. First of all, I think it helps to have seen the first movie to really understand more about the two main characters as well as the villains and kind of what’s going on.

Sadly, there’s no character arc at all for the characters and even for the ones that we met before in the last movie. So the movie kind of seems pointless. There’s so much overacting and screwing in.

None of the characters are very appealing or even interesting. We just don’t learn anything about them, so it makes it really hard to care whether or not any of them survive. Live or die. Doesn’t matter. That’s not good.

I don’t want to give away any spoilers on this part either, but I was really happy when the very first person died because they were easily my least favorite character, and I just instantly was like, Oh, brother, so sorry for the person who played that role.

Sometimes it’s hard to understand what people are saying because they’re either yelling or mumbling, so that’s frustrating. Maybe people said something brilliant and I just didn’t hear it, but I don’t think so.

It would have been way better if each of the characters had a special set of skills, so that would force them to actually listen to each other and help.

Instead, they often just yell, Listen to her, referring to Zoey Davis, who’s played by Taylor Russell, who is clearly the smartest person in the room in every room and solves everything every time.

The clues fly fast and furiously, and in fact, people figure out clues so fast and race off to the next one before you’ve even had the satisfaction of mulling it over in your brain to feel smarter than the characters.

Because you figured it out already. They’re just, like, ridiculously fast at solving these clues that make no sense at all.

The action scenes where all of the characters are just screaming and running around are just too frenzied. And again, it’s hard to hear the clue and have time to even think about it before they’re off racing around doing something else.

There really isn’t any plot. There’s nothing that really propels the story forward other than they have to survive the room. And then they get into another room and instantly it’s frenzy, chaos. Again., there’s no really big payoff in the end that leaves the audience satisfied. There’s terrible dialogue.

The musical score is mostly annoying, with pounding sounds and screeches. Some of the clues and details make no sense at all.

One example is a scene where there’s acid rain melting on metal and everything in its path. But for some reason, Umbrella is able to protect one of the characters from death.

The villain is Faceless, which could be fun if done well. Kind of like in the first movie, but in this one is just annoying.

And Yes, the movie ends with the TS for yet another sequel. So comment down below if that is anything that you’re interested in seeing.

This movie is rated PG 13. Obviously, people die and are in perilous situations during the entire movie. There’s one F-bomb, and one of the characters is a scumbag thief.

So some positive themes that you could make out in the movie are choices, friendship, loyalty, wit. And Yes, it’s another female empowerment movie because every movie is these days.

All right, so I mentioned that I would share some lame lines with you, and you can see my full movie review online at Movie Review Mom com, but I’ll share just a few of them with you right now. One is well, these are some of the types of excellent writing in this film. When Zoe Yes, there has to be a connection. And then when Ben Miller yells, I’m not going to make it.

So I am going to give Escape Room: Tournament of the Champions a D. 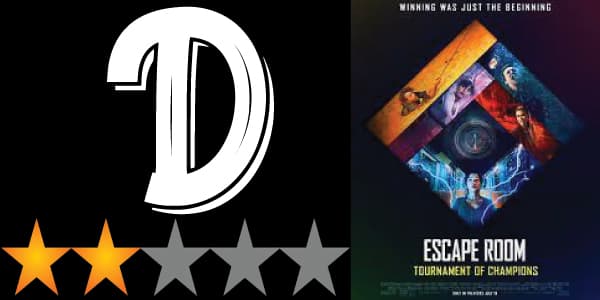 It was just kind of dumb and mostly disappointing. I was kind of looking forward to the sequel and hoping for something bigger and better, but it was just a frenzy mess in the end.

Guys thank you so much for reading the review of the Escape Room Tournament of the Champions movie. See you next time.

Escape Room: Tournament of the Champions

Check out the trailer of the new action, adventure, and horror film “Escape Room: Tournament of the Champions”.