Elite Season 4 Series is a new season of the famous Netflix crime, drama, and thriller  TV Series Elite.  Let’s Check out its cast and review it together.

We’ve been following the scandal and drama in Elite for years. And Elite is back at it again with a season 4 and with the way the last season ended, we had to say goodbye to some of our favorite characters.

But not to worry because we’ll see some returning casts for Season four and will be introduced to some new ones. Here’s everything you need to know about the cast of Elite, Season four, and their love lives.

Miguel is 24 years old. His birthday is on December 12, 1996. He’s been in a long-term relationship with famous Spanish singer Aitana Ocana since 2018. The couple goes surfing together and they even got a dog together who they always post photos with.

Georgina is23 years old. Her birthday is on April 30, 1998. She’s in a relationship with Elite executive producer Diego Betancor. It looks like they met after she joined the series for Season two and they started dating near the end of 2019.

Itzan is 23 years old. His birthday is on October 31, 1997. There were rumors he was dating Danna Paola who plays Lu Montesinos. Then rumors hit. He started dating Ester Expósito.

However, he didn’t confirm any of those relationships. He’s just close friends with his costars and he’s single right now.

Claudia is 26 years old. Her birthday is on July 23, 1994. She has a girlfriend named Carolina Cavill, and the two went to Paris together. She’s also very close with her brother Ramon Molino.

Arón is 24 years old. His birthday is on March 29, 1997. He’s pretty secretive about his love life, but there were rumors in 2020 that he was dating model JessicaGoicoechea. They were spotted together several times, but he’s never confirmed if they were dating.

Omar is 23 years old. His birthday is on March 26, 1998. In May 2020, he confirmed his relationship with artist Alonso Diaz on Instagram. He shared a cute photo along with the sweet happy birthday caption, but other than that, they keep the relationship pretty private.

Martina is 24 years old. Her birthday is on October 23. In 1996. She’s dating Ivan Pellicer. They share the cutest photos together on each other Instagrams. Her boyfriend is also close friends with her co-star Omar.

Manu Rios is  22 years old. His birthday is on December 17, 1998. Fans speculated he was dating Denisse Peña. Then there were rumors he was dating Carly Gibert. But none of those relationships were made official. So they’re probably just friends.

Carla is 22 years old. Her birthday is on July 19, 1998. She has many photos with friends and co-stars, but she hasn’t publicly stated if she’s dating someone. So we don’t know if she’s single or not.

Pol is 23 years old. His birthday is on April 4, 1998. He shared a Photo with musician Natalia Lacunza in February 2020, but they never made their relationship known. So they could just be friends.

Elite Season 4 Series is finally on Netflix, one of the biggest shows on the platform, and it’s back with a new cast of characters.

So at the beginning of Elite Season 4 Series, a stir new principal and three new students are amongst the new cast of characters. Omar and Samuel must prove themselves academically while their friends are trying to help. So big changes have arrived with this new principle.

And all of the students, they’re trying to figure him out. They’re like, Okay, is he just kind of the nice guy that’s pretending to be nice? Is he attempting to get a lot of us out of here?

Because maybe certain things have prevented us from proving that we deserve a scholarship, and two of our characters have to test their knowledge.

If you saw it, you’ll know what I’m talking about at the beginning of this season, and the power has essentially shifted just a bit.

But one thing else season four does well is it locks you in off the bat. Just that opening shot with the cops interrogating Guzmán about a girl lying in a swimming pool.

Now, what the heck is going on there? We slowly start to unravel that mystery. And as always, there’s an intriguing mystery. Every single season, it’s something different, but this time around, it locks you in.

We continue to cut back on that and slowly discover what is about to happen or what has happened. And that’s the beauty of Elite.

And even with these new characters, some of which I was a bit questionable about at first, but I really grew to at least enjoy their presence, whether I agree with every writing decision or not.

Some things were just a bit too obvious on the nose. Predictable, but not everything. And it’s still managed to do quite a bit for me. When you’re looking at all of these new interactions.

Yeah!! These new siblings, played by Martina Cariddi, Manu Rios, and Carla Díaz, and their father Benjamín played by Diego Martín is the new principal.

Now, the relationships that each of them, forms and the trouble that they get themselves into off the bat is troubled that’s pretty much everything you want in a series like Elite.

Whether it be standing up to some of our current castmates or forming friendships and relationships that get underneath the skin of their father.

Their father, who is a person that one or maybe two of the siblings may not be the biggest fan of. He is controlling. At one point, he attempts to be this loving father figure in the early episodes, and she’s just like, don’t even try.

Why are you trying to be this person that you are not? I can see the look and feel on your face. You are not wanting to be a good father at this point in time.

And even though there are redeeming elements about his character, he is easy to look at as kind of like the villainous presence just because, I mean, at the beginning, he’s trying to kick two students out of here because he says they don’t belong on their scholarship.

And of course, kids being kids, they believe that they should be there. They have a right to be there. And all of them are trying to balance everyday life with school.

And they try to prove that to Benjamín at a point saying, listen, I was out here doing this, taking care of someone, but he doesn’t buy it. He says, look, you get scholarships, and part of this is true. You get scholarships due to your academic performance and it just wasn’t there.

So that all takes place in the first few episodes. And then I believe it was episode two or 3, maybe episode three, where another new person joins the school.

His name is Phillipe. He belongs to a Royal family in the UK. And all of these students bring their drama, their controversies, and Guzman, Samuel, Omar. And it is just very troubling, but also exciting when it comes to meshing this in with our current cast of characters.

And that was entertaining. It really was. And we get the stuff we love it. We get the cheating and the fighting and the sex and the drugs and all of the things that kids are getting their South into nowadays, let me tell you.

But we also get the unraveling of this murder mystery. And I love a good crime drama, whether it be television or in a movie. And this was as engaging as I had hoped it would be.

Now comparing it to other seasons, we had three seasons to grow and fall in love with the of these characters, and some of them do return, but others do not. Right. So we’re really shifting focus this time around.

And that had me nervous. That had me worried. But the writing is very consistent. And I found elite season four to not only be entertaining, I found it to be one that’s going to keep you hooked throughout.

And if you don’t know what Elite is and you’re just starting out with season 4, then you may not be used to this style. Characters making ridiculous decisions at points.

But it’s entertaining. It really is. And Elite season four balances a new cast of characters with an intriguing mystery in an entertaining way. And that’s all I could have asked for.

It was a very easy binge. And when I say easy binge, I was locked in and excited to go from episode to episode. Even though it may not be as concise as some of the other seasons, and not every episode flows to perfection. It’s definitely a really solid season of television.

So I am going to give Elite Season 4 Netflix Series a B-Minus. 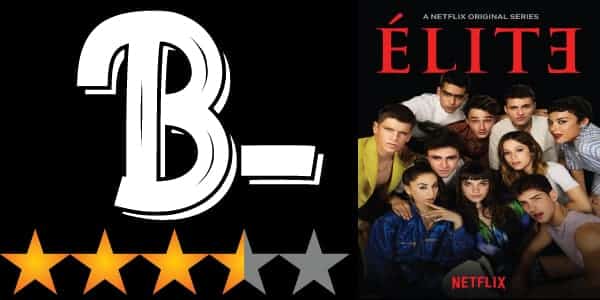 Guys thank you so much as always for reading the review of  Season 4  of the Netflix Series Elite. See you next time.

Check out the trailer of the new season of Netflix Series Elite. Elite Season 4 trailer.