Echoes of the Invisible 2021 is a new documentary movie was directed by Steve Elkins. Let’s take a close look at it.

This movie doesn’t have an actual movie rating because it’s a documentary, but I think I’d probably give it PG only because there’s one view of the naked backside of a man who’s walking away and he’s naked.

This documentary movie is an hour and 46 minutes, and it’s actually the SXSW winner. And it’s being released June 22nd, 2021 courtesy of Utopia.

Echoes of the Invisible Cast & Crew

Echoes of the Invisible  Movie Review

Explorers embark upon seemingly impossible journeys into the most extreme environments on Earth to find the connective tissue between all things seen and unseen.

This feature documentary turns its lens onto explorers who are pushing the human body and technology beyond limits in the most extreme environments on Earth.

It follows  Al Arnold, a blind man running through the deadly deserts of Death Valley. Rachel Sussman, a photographer capturing photographs of the oldest living organisms in the world.

Paul Salopek, a journalist walking across the world in the footsteps of the earliest human migrations and scientists building machines to look back nearly to the beginning of time. It’s all very fascinating.

These individuals are linked by their search for the fabric of our interconnectedness before it is lost in the noise of our distracted and divided world.

Echoes of the Invisible features original music from Ben Aspect of The Sugar Plastic and Morgan Henderson of Fleet Foxes, along with music contributed by Juliana Barwick, Colin Stetson of Arcade Fire, Tom Waits, the National, Jim O’Rourke of Sonic Youth, and many others.

Needless to say, this documentary was a passion project that took a lot of time and effort for many, many people. So let me point out just a few more things that I really liked about this movie.

First of all, the introductory scene of a man who’s creating beautiful art out of tiny colored pieces of sand was so perfect as a symbol of how tiny things, like a grain of sand, can create something beautiful over time.

During the course of the film, more images of sand art were used to demonstrate more messages about life, and it’s very symbolic and beautiful.

You get to travel all over the world and even into outer space during the course of the film.

Like I mentioned, the cinematography is stunning. Some of the landscapes look like they’re from another planet. It’s just jawdropping, really.

There’s a section in the film where no words are spoken at all. Instead, subtitles music, and some sounds take you on a spiritual journey of thought. That’s really impressive and powerful.

The original scores I mentioned by Ben aspect is lovely and contemplative and a perfect background as you’re looking at these beautiful images and really contemplating the words that are spoken during the movie. The movie will definitely put you in a mood to really contemplate your life and your place in the world.

There really wasn’t anything I didn’t like about this movie. I can think of maybe one thing, and that is it wasn’t entirely clear how the main in people who are featured in the documentary are related.

For example, in one scene, Rachel talks about her mother and growing up, and then on the screen, you see a picture of Linda. And so I wasn’t sure if Linda was her mother.

That wasn’t made clear. Maybe I bling too fast and missed it. I don’t know, not that that’s a big deal. I was just curious how these people got together as they explored their area of expertise.

So let me give you some tips for parents. First of all, because it’s a documentary, some kids will be very bored unless they’re really into history and science and a little bit older young kids will fall asleep, probably or just leave the room. Sadly, as I mentioned, you see the naked backside of a man, and ultimately

This movie is family-friendly because there’s no profanity or really any other objectionable content, except for one scene of the naked backside of a man, and ultimately.

And the importance of listening to nature and to ourselves (in our inner soul and heart and mind) walking and the inner drive that compels us to do the things that we do.

Echoes of the Invisible documentary film is beautifully done and really gives you pause to reflect. And we all need time to do that.

So I am going to give Echoes of the Invisible documentary film a B. 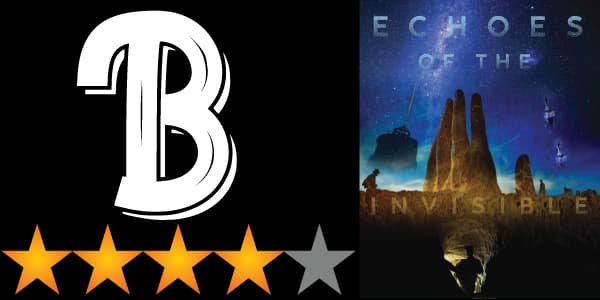 Echoes of the Invisible released in Theaters and Streaming on Jun 22nd, 2021. You can watch it on Apple tv. If you got a chance to watch this documentary comment below with your opinion about it.

Guys thank you so much as always for reading the review of the new documentary film “Echoes of the Invisible”. See you next time with another movie review.

Echoes of the Invisible Trailer

Check out the trailer of the new documentary film “Echoes of the Invisible”.