Die in a Gunfight 2021 is a romance action film. This modern-day take on the Romeo and Juliet story is available in theaters only starting July 16th, 2021. The movie is rated R, and it’s an hour and 32 minutes.

Die in a Gunfight movie is directed by Collin Schiffli and written by Andrew Barrer and Gabriel Ferrari. It stars Alexandra Daddario and Diego Boneta. It is described as an updated version of William Shakespeare’s Romeo and Juliet.

So in a nutshell, In New York City, a young guy falls for the daughter of his father’s nemesis.

Mary and Ben are the star-crossed black sheep of two powerful families engaged in a centuries-long feud. When the pair reignites a romance after many years apart, their forbidden love draws a Motley assortment of schemers and killers into their orbit. And as fists and bullets fly, it becomes clear that violent delights will have violent ends.

While critics are hating this movie, and I’ll tell you why audiences seem to really get a kick out of it.

So there were plenty of things that I liked about the movie. First of all, it’s a modern romance inspired by that classic tale, Romeo and Juliet. So seems like the plot would be good, right?

Well, it’s been done a million times over, but this movie does have a few new twists. I’ve always enjoyed Alexandra Daddario in movies, and I’m so happy to see her in another one. She’s beautiful and it seems like, with each movie, her acting gets better and better. Diego Boneta did a great job as an extremely flawed, very annoying protagonist.

The standout characters I thought that were the most entertaining were played by Travis Fimmel and Justin Chatwin. They were both hilarious, offering the comic relief for the film and the story.

Justin Chatwin by the way, actually performed all of his own stunts because he’s an extreme sports enthusiast and a motorcycle fan in real life, so good for him.

I really like the musical score is also light and bouncy and quirky. There’s some snarky humor, which is fun and entertaining.

And fun fact, there were only 23 days of filming. Now some critics would say it shows and they may be right, but that’s still super impressive. I mean, what did you do in the last 23 days? Come on.

Billy Crudup’s name is included in the cast, but he only provides the voiceover narration, so if you were hoping to see him, you’re going to be disappointed.

If you like Guy Richie’s take on movie making, then you might get a kick out of this film full of unique style and lots of violence.

So there were also plenty of things I didn’t like about the movie. First of all, it’s really hard to feel sorry for self-absorbed rich people. I mean, really. And as I said before, the protagonist is a real jerk. So I didn’t think that he deserved love or money or happiness or anything. It was just a real jerk.

All of the characters, in fact, feel very poorly developed. I don’t know that there’s really any character arc worth talking about. There’s a lot of exposition, and that narration is part of the style, but it is quite heavy in many parts of the movie.

The script itself is just badly written with Super cheesy dialogue and plot. The ending is super lazy. There’s a lot of humor, but it doesn’t always land, at least not for me.

And the film starts off really strongly, I thought with great promise, but then it quickly starts taking a nosedive until the end. You’re just rolling your eyes.

So Needless to say, I quickly became bored, and I was really hoping it was going to be a really fun, quirky movie, and it’s just not that much fun.

This is a rated R movie. It’s not appropriate for kids. There’s tons of bloody violence, there are disgusting sound effects.

When some people are killed, their various weapons are used. There’s crude language as well as profanity and lots of F-bombs. And then there are premarital relations. You don’t see a lot of skin and action, but you definitely know what’s happening.

So there were some themes that were introduced and presented pretty well. First of all, love, choices, and consequences of our choices, living up to our parents, expectations, family, personal goals, connection in a variety of ways, and sacrifices.

So I am going to give Die in a Gunfight movie a C-Minus. 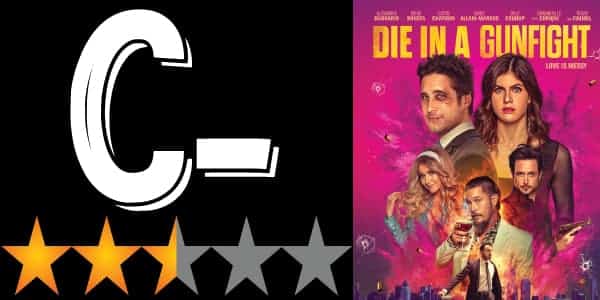 So I’m really curious to hear what you’re going to say about it. Comment down below because I would love to find out.

Guys thank you so much as always for reading the review of Die in a Gunfight movie. See you next time.

Die in a Gunfight Trailer

Check out the trailer of the new romance action movie “Die in a Gunfight”.