Demon Slayer, the movie Mugen Train, is finally released in American theaters, this was the highest-grossing film of all time in Japan. It was a massive, massive success.

Demon Slayer is one of my favorite new anime of the past few years. I love the storytelling. I love the characters. The animation is gorgeous and it’s a lot of fun and super bloody and has a lot of great horror to it.

So it’s right up my alley and the movie picks up exactly where the show leaves off. So I’ll try not to ruin any details about the show just in case you haven’t seen it.

The film absolutely, positively is not standalone. Knowing things about the show, having seen the show is going to improve your experience significantly.

You really do kind of have to have seen the show. Yeah, you can watch it and sort of getting a feel of what’s going on, but it’s really going to help if you’ve seen the show.

But the basic gist of the plot is that after his family was brutally murdered and his sister turned into a demon, Tanjiro and his comrades embark on a new mission aboard the Mugen train on track to despair.

On this train, Tanjiro and his pals get help from Kyojuro Rengoku, an extremely powerful Hachiro. Someone they really look up toز

As a demon is taking control of the train and the passengers on it, trying to infiltrate their dreams and keep them in a dream state so we can kill them.

Me and most of my friends have really been looking forward to this, as I’ve already stated, demons. There’s a really good anime. I really love it.

I had a great time with it. And the movie does not disappoint. If you love the show, you’re going to love this movie.

As I already stated, you do have to sort of have a knowledge of the show to truly appreciate this movie. And if you don’t, it might be harder to like it.

This film gave me just about everything I wanted to see as a fan of the show. And it’s also rare in that it’s an anime film based on a TV show that is actually Canon, that is actually a sequel.

Most of these anime movies that happen that have shows we love tend to just be these sorts of offshoots and one-offs where they don’t really impact the show’s narrative, which can be fun for the movie.

But it always feels strange when you jump back into the show and you have to remind yourself the things you just saw don’t really matter. I like that they matter here.

Tanjiro experiences on this train are very important because as this demon puts him to sleep and puts him in a memory that he would prefer to live where his family is alive and he can spend time with Nezuko, his sister, as a human, and she doesn’t have to wear a bamboo brace around her mouth.

And she’s not a demon anymore. And he can be with his family again. And he has to force himself to realize that he’s in a fantasy and get out of that fantasy and go back to the real world, which is a much harsher place where people die and where he can be hurt.

And he has to learn to accept that and sort of the throw away the past. That has meant so much to him but is also holding him back in a way. So it’s important to his character development.

Although the movie is very action-centric and sometimes comedy-centered and the character development is a little minimal at times. I like the fact that this movie is going to actually impact Demon Slayer as it moves forward and especially his experiences with Rengoku.

Rengokuis awesome in this film. He’s a really badass and you understand why everyone looks up to him. I just have to say the most obvious thing, though. This animation is a real spectacular.

It’s some of the best I’ve ever seen in the anime film. It kind of blew me away. And Dragonball Broglio looked great. The most recent My Hero Accademia film looked amazing.

The animation is so top-tier that it’s hard to imagine it being better than this. It’s so, so good. And the fight sequences really popped off the screen. The score was really epic and I got into all the fights.

The comedy hit really well, especially a sequence inside Zenitsu subconscious, where he’s forced to deal with a man who’s infiltrated his subconscious, which is very hard for him because he’s very much so in love with women. And that sequence is hilarious. I thought it was really funny.

That character can sometimes get on my nerves. Screams quite a bit, sometimes way too much. I think they found a pretty good balance of it here where he was terrified and screaming and crying for the right amount of time without getting on my nerves as much as he did in the show.

There are a couple of things about the film that I wished for. Slightly different. Nezuko, unfortunately, doesn’t do much in the film.

She might be my favorite character of the whole show, even though she doesn’t really say much. I just really like Nezuko and I wish that she was more involved in the movie.

She has one great moment, but then it’s kind of undercut by having to be rescued, which I thought was kind of cheap.

And also without getting into any spoilers, someone kind of just appears near the third act to sort of create a development. And it didn’t feel like there was much setup to it at all.

What transpires after set appearance was extremely entertaining, but I wish that there was more of a setup for why that person is there.

you know, honestly, I just had a great time watching this movie. My friends and I had such a blast with it. It gave me what I needed. It was extremely entertaining. As a demon Slayer fan, a lot of the character stuff was very funny.

I just wish that there was a little more Nezuko and a slightly more polished narrative in regards to who appears. It is very much so part of the show. It’s a movie that you can watch as a film that’s entertaining. If you know the show.

It will be best enjoyed. If you just watched Episode 26 of Season One, if you’re kind of just popping it in years to come, it might feel sort of cut out of time and not necessarily its own thing. But if you’re watching it right after season one, it’s just going to feel like more of what you love.

I’m going to give Demon Slayer movie an A-minus. 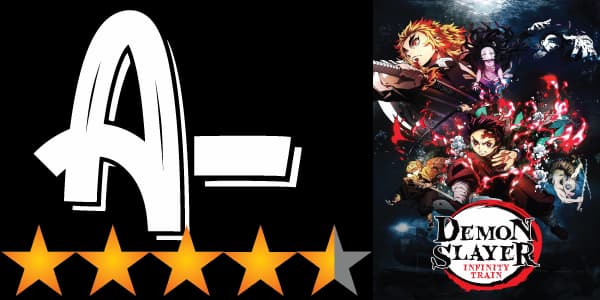 I had a great time with this. And I’m assuming that if you’re a fan of the show, you probably will as well. It is in theaters now. I hope you guys get a chance to see it if it’s safe and you feel comfortable doing so. You can also check Demon Slayer Wallpapers if you are a fan of this anime.

Thank you guys, as always, for reading the review of the Demon Slayer Movie. See you next time.