Check out the review of the Biography, Drama, History film, Dance of the 41(El baile de los 41).

Dance of the 41 Movie Review

The movie is based on the ball of the 41, which was a society scandal in early 20th century Mexico that became the first time homosexuality was spoken about in Mexican media.

Before watching Dance of the 41 I had never heard of this event in LGBTQ plus history and being a part of the community, I was immediately drawn to this story to learn about its lasting impact on society.

This incident that occurred on November 17th, 1901, where 41 men were arrested, 19 of whom were dressed as women, shook the foundations of Mexican culture because many of the men that were caught at this ball belonged to the upper echelons of society.

And despite the Mexican government’s ploys to keep this story from breaking, the press was keen on releasing this information to the public because of the status of the participants.

The film follows Ignacio de la Torre Played to Perfection by Alfonso Herrera, the son-in-law of the president of Mexico. He is married to the president’s illegitimate daughter Amada, though he is hiding from the world that he is in fact gay.  His only place of solace is in a secret gentlemen’s club for elite men who are all masking their true identities.

So first and foremost, this is such a captivating story and an integral piece of history that I am so happy was brought to the screen.

This is also an extremely brave piece of work as Mexico is still miles behind many other countries in LGBTQ plus rights, as well as it has the second-highest rate of transgender murders in the world.

So to put this historically impactful and provocative film on the world stage was a very courageous feat. And although the filmmakers had an extremely difficult time trying to bring it to fruition and find distributors, thank goodness for the people at Netflix to help allow this film to be seen by as many people as possible.

I must note that this film is very sexually frank, though nothing more explicit than what you’ve seen in a lot of other R-rated movies. But a lot of it is same-sex. So if that is something that bothers you, you might want to heed this warning.  One thing I just cannot get over and what has stuck with me the most is how utterly gorgeous the stance of the 41 is.

The filmmakers have painstakingly brought early 20th century Mexico to life in a way that is pretty miraculous. The opulent costume and production design matched with some of the best cinematography I have seen completely transports you to this time and place.

The cobbled streets lit by flickering lamp posts, the lavish architecture of mansions and government buildings, the eyes wide shut like a sex dungeon, and the velvety richness of the gentlemen’s club. All of these places brought to life here feel like you have visited them yourself.

And I must add, it will be a certain unimaginable crime for this film to not be represented at the Oscars for at the very least these categories because I am telling you, you will be blown away by the craft on display here.

The acting is also top-notch, with Alfonso Herrera completely inhabiting the role of Ignacio in an extremely tough part to take on because he is not the most likable protagonist to follow.

I also fell in love with Emiliano Zurita as his fictional lover, Evaristo Rivas, who is so utterly charming you cannot help but root for his happiness. Although, I do think he was not given enough screen time.

And lastly, Mabel Cadena is a pure powerhouse. As Ignacio’s wife Amada, it is excruciating to see her go through the realization that her husband does not love her in the way that she desires. And this is also a very tough role to pull off because she doesn’t necessarily take his extramarital affairs lightly.

Although I do admire the filmmakers doing their best to really paint Ignacio as a three-dimensional character and true to who he really was, I did struggle to relate to him because he is a pretty awful human being.

He takes advantage of his wife and puts her through extreme emotional turmoil. He also plays his lover Emiliano as a second fiddle and his insatiable for power makes him someone that is nearly impossible to root for.

And although the end is still powerful and heartbreaking, it would have left even more of a lasting impact if there was an ounce of me that felt for Ignacio.

I also yearned for more after the events that occurred on November 17th, 1901  to really grasp what kind of impact this all had on Mexican society.

I think if we had spent less time on the build-up to the ball and gotten more of the aftermath, this film would have completely hit it out of the park. Even so, I think Dance of the 41 will absolutely take your breath away. 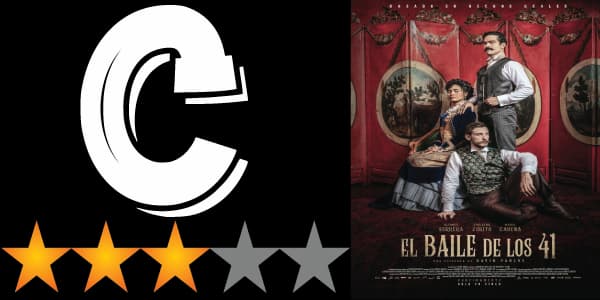 Though a bit hard to fall in love with because of its unlikable lead character. Dance of the 41 is truly one of the most beautifully crafted films you will see this year, and also an important, courageous, and integral piece of filmmaking chronicling a devastating moment in LGBTQ plus history.

Dance of the 41 or El baile de los 41 will be streaming exclusively on Netflix worldwide on May 12th, 2021.

Guys thank you so much for reading the review of Dance of the 41 or El baile de los 41 film. See you next time.

Dance of the 41 Movie trailer

Check out the trailer of this Biography, Drama, History film “Dance of the 41(El baile de los 41)”.