Crawl 2019 is a good old-fashioned horror film about a young woman who finds herself trapped with her father in the basement during a Category five hurricane.

Crawl 2019 film was directed by Alexander Ajan as a horror film about a young woman who finds herself trapped with her father in the basement during a Category five hurricane. The water’s coming in. The flood is rising, and along with that water comes a bunch of alligators.

I’m a sucker for a good old-fashioned horror film when that doesn’t rely on being elevated, when that isn’t pretentious when that knows exactly what it is and is very efficient at being that. And that’s exactly what Crawl film was for me.

I have watched the movie and I really enjoyed it. And I’m not sure why Paramount didn’t want critics to talk about it, because it seems like other critics are enjoying the film as well.

It almost feels like they’re actively trying to not promote the movie, which is very strange because this is exactly the perfect type of horror film to release right now.

It was just under 90 minutes. It was extremely proficient in its thrills. It was very well directed in its execution of the scares. The alligators looked realistic enough and both lead performances were good enough to buy into the situation. Barry Pepper, in particular, I thought was excellent.

But would especially help. This movie was the atmosphere. The hurricane is definitely a character. It was very convincing. I always bought it. It felt very real that this was a threat. The CGI for the storm is also great. You know, I was expecting it to be a little hammy, but I never really felt that way.

This director also made Piranha 3D, which was a very tongue-in-cheek horror film about undersea critters that wanted to kill people.

And this is very much the opposite of that. This film is taken very seriously. It’s an escalating series of survival scenes.

We have a setup that does exactly what it should. You meet the main character. You find out she has a history of swimming.

She’s a professional swimmer and she’s excellent at it, but she’s also estranged from her father. So now she’s in a situation in which swimming can really help and she has to save her father. And so that means the family relationship.

So in some ways, you can see how the film is very calculated. Everything is exactly how it should be to maximize each scene and each moment.

And it does sometimes feel like, OK, now we have the scene where they get a little closer. Now we have the scene where they bond a little bit. Now we’re going to creep through this area of the basement. Now we’re going to do this and you can tell that it’s a series of beats because they’re trying to find things to constantly do.

And if noticing that is going to bother you, that might be an issue for you. It never really did for me, though. I found that most of the scenes worked very well.

And I like a good horror movie that’s just under 90 minutes that knows exactly what it’s doing, that presents its characters. You get to know them and then you’re just thrown into a situation and you get to watch them try to survive it. Those are some of my favorite small horror films.

I love a good contained monster movie. And even though the alligators in this movie technically are creatures and yes, we’re supposed to be scared of them like monsters.

What I also appreciated about this movie is the film didn’t treat them like they were. They’re animals. They’re not larger than life. They don’t do anything that I couldn’t imagine an alligator possibly doing. I mean, I’ve seen tons of videos trending of people in Florida just filming alligators walking through their kitchen. It happens.

And they’ve taken that and amplified it, obviously for horror purposes. But the ticking time element of the water continuously rising makes the family have to go from floor to floor.

And every time the water rises, the alligators have access to a new part of the house. That’s very clever. That’s good tension-building.

There were still aspects of the movie that I thought was kind of silly. For one, this Florida house has a basement and most Florida houses just don’t, from what I understand.

Also in this basement, the brick walls have holes in them. Like this would never happen. I mean, that is just asking for your entire basement to be flooded.

I get that this basement is extremely unfinished. It’s almost all just piping and wood, but it just felt like this is asking for this flood to happen. It’s so obvious.

The other reason that those holes are there for the characters to walk up to the wall and look out and potentially contact people. So it just felt like a very convenient device that didn’t really make sense to me.

And while I was watching, the film was very tense and I was very into it. I love the production design. I loved how they made the hurricane really feel like it was happening and they used their budget very well.

But in retrospect, because a day has passed since I’ve seen it, I didn’t really care that much about the characters. They give the minimal amount of setup and character development that would be needed for a film like this. But it’s the kind of thing that I can really just overlook because I had a blast watching it and I enjoyed watching the characters try to survive these scenarios.

This is the type of horror film that I need a couple of times a year, just a good old-fashioned, slightly under 90-minute movie where there’s some kind of creature and you have got to try to escape it. If you can do that and you can do it. Well, I’m a satisfied customer. 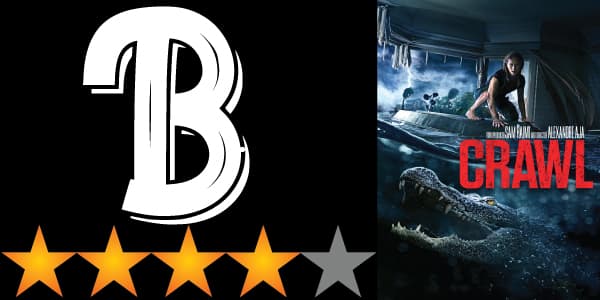 I’m not sure why this film wasn’t screened for critics all over. It’s strange. Seems like a missed opportunity to spread some buzz for a horror film that was much better than I thought it was going to be.

Guys, thank you so much, as always, for reading my reviews. See you next time.