Netflix’s Cowboy Bebop is a live-action remake of the Japanese anime series 1998 anime classic of the same name.

I think this is going to be a touchy review because we have a live-action remake of a beloved anime IP. But will Netflix Cowboy Bebop satisfy some or leave everybody unhappy?

Three bounce honey hunters, commonly known as Cowboys, are all trying to outrun the past. as different as they are deadly. Spike Spiegel, Jet Black, and Faye Valentine from a scrappy Snarky crew are ready to Hunt down the solar system’s most dangerous criminals.

But they can only kick and quit their way out of so many scuffles before their pasts finally catch up with them.

If you’re completely unfamiliar with Cowboy Bebop, the original is an anime series from 1998 that had 26 episodes for its full run with a movie thrown in there also. It’s a space Western with a massive infusion of jazz to the soundtrack.

While there is an overarching storyline following the main characters, many of the episodes consist of excursions as the bounty hunters track down criminals so that they can get paid.

now for this review while I will reference the anime here and there, I’ll have most of my commentary stick to this live-action series and the rating will be purely based on this version.

But if you’re a massive fan of the anime before you hate me in the comments and thumbs down this like crazy, watch all the way through because I will address the show from the perspective of somebody who loves the anime because I do love the anime.

There’s a lot this live-action remake has got going for it. I mean, first, the acting and some of the character choices are just great.

John Cho as Spike Spiegel our lead protagonist is a wonderful fit. Regardless of whether you’re a fan of the original or this is your first exposure.

He has got a calm and reserved demeanor and he’s almost aloof with just the right amount of snark, but he’s not always quiet or laid back.

When he needs to kick butt, he can certainly get the job done. He really does embody the persona of a cowboy who saunters through the streets, hands in pockets just heads slightly down with a seemingly aimless direction.

But we know he’s deliberate in most of his actions, and when the need for action arrives, Cho is a blast to watching this, and the show makes a great effort to stick spikes look also.

The hair and signature blue suit with sleeves rolled up is spot on, and it works amazingly to visually complement shows portrayal.

And also Cho and the show nail how his character is running from his past, which creates some really engaging conflict.

Mustafa Shakir plays Jet Black and his whole persona is spot on. The cool, mellow, and even often annoyed character is outstanding on-screen.

Shakir’s voice is soothing and commanding and again, just like with Spike, the show has nailed his costume. Even his arm is well done now.

Jet has this mechanical arm and the show captured it realistically and I think accurately. The dynamic between Jet and Spike is fun because there are many times where their relationship mirrors real life where they get along but then also kick each other off to no end because of their choices.

Daniella Pineda stars as Faye Valentine, and she took a minute for me to fully embrace her in this role. We initially don’t see much of her, and then she’s gone for a little bit of the show.

But once we get to see more of her, her sarcastic character gets to shine and she became pretty endearing.

If you’re familiar with the anime, then you’ll notice that Faze outfit is a bit different, and that was a conscious decision by the showrunners to make it less exploitative.

Now, from a supporting character perspective, we have people like Vicious, Ana, Gren, and even Hakim and Teddy, and some are larger and more important to the show in its entirety, while others play roles within just a single episode.

And for those that are fans of the show, we do get the appearance of Ein the Lovable Corgi.

The music is phenomenal throughout the show, and that’s because this production hired the same original composer, Yoko Kanno.

Now jazz is a large feature of the show itself, helping to create the unique aesthetic that made the original so cool and memorable.

I’m not normally a fan of Jazz, but it fits so well here, and it works to enhance the scenes going mellow when the pace is subdued and then becoming frenetic when the action kicks in.

But we also get the Jazz discussions from Jet, giving us more context and how the music works. Now the effects on this are executed pretty well.

There’s not as much space as I’d expected, but the sequences that we get can be fun, but even outside of that. There are multiple sequences where some very unique effects are employed.

Now one toward the end of this season features some action where we go into a character’s mind, and each time we go there, the surrounding landscapes become more digitized and posterized, causing them to have these thicker black outlines and a flattened and maybe even slightly distorted coloring.

The best part of this, though, was how only portions of the screen would be affected, creating something that was visually confusing and pleasing all at the same time.

Now the fight sequences are uneven, where some of the martial arts and hand-to-hand combat feels very slowed down, just like so that they can allow the actors to complete the moves.

There are other times that the action is very engaging, and it also looks great with quick movements, and a lot of the time the camera is pulled back, which allows us to see more context of the fight, giving it more oomph and excitement.

Now the story for season one is a little convoluted, especially at the beginning, and this makes it a little more difficult to follow it than is necessary. But it does then begin to find its stride and it settles into something that does start to flow well.

Just like in the anime, there are small adventures that the group goes on sometimes together and then other times individually. And then there is this larger overarching story that involves Spike and his past.

For this first season, there are ten episodes that range between 40 ish minutes and an hour in length, and I think they’re paced somewhat well.

But because this is a Western, albeit a Western set in space, the pace is patient and deliberate. It also took me about four episodes before I was fully invested in the story.

Now some of that, I think could be because I love the anime so much, but I think the live-action just took a little bit to find its groove.

I think this show has the potential to suck you into the drama and the storyline, thanks mostly to the charisma and dynamics of Cho, Shakir, and Pineda.

They create the oddball, dysfunctional family that’s also present in the anime, and they play off of each other in ways that are engaging and entertaining.

Now, if you’re a fan of the anime or are really close to the series, I don’t think you’re going to like this adaptation at all.

The show takes the basis of the anime and then changes some of the storylines but also keeps portions of the original, but not necessarily in the same context or the same order.

In the live-action, We meet characters at different points than in the anime, which I think can be okay, but it changes the arcs and dynamics in just some weird ways.

It’s like the show was afraid to fully change the story to go with a completely new one in order to just make it all their own.

So instead it takes bits and pieces and then smashes them to form newish storylines.

And I think the biggest thing that will make you unhappy and probably just straight up piss you off if you love the anime, that is, is how the biggest portion of this story arc has been retconned.

Now, while this isn’t going to affect the story negatively for those that have never seen the anime, for those of us that love the original, this revised arc removes the emotional punch to such a degree that we won’t carry that weight.

So overall, this liveaction adaptation captures some of the aesthetics and feel of its source material while adapting the sessions that are similar but different to craft Newarks.

The lead actors nail their performances and craft characters that are engaging and complex but also relatable.

The music is phenomenal, and the settings and costume design work to build out a world that is gritty and entertaining.

The action sequences are inconsistent in their effectiveness, and the story is somewhat convoluted, especially at the beginning.

But once the show gets into more of the episodes, the flow does begin to click and I found myself enjoying the story progression more.

I do believe, though, that fans of the anime will be disappointed with this adaptation because while it changes some of the story, it doesn’t change enough to make it unique, making this a frustrating reimagining. That’s not novel. There’s sex nudity, a ton of profanity, and violence.

So I am going to give Netflix’s Cowboy Bebop Series a C. 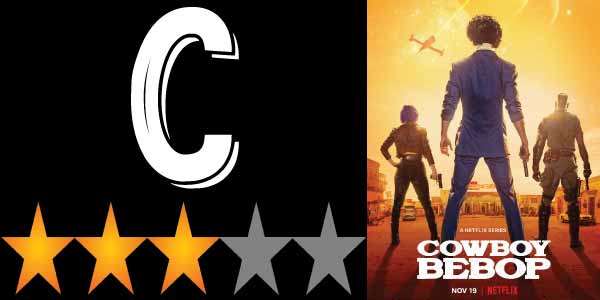 But as somebody who really loves the anime, I would give it F. So if you’ve been looking forward to this live-action adaptation, are you a fan of the anime like I am, I really want to know how everybody receives this series.

Whether you love the original or this is your first foray into the lore. Let me know in the comments below.

Guys thank you so much as always for reading this review. See you next time.

Check out the trailer of the new Action, Adventure, CrimeSeries; Cowboy Bebop.