Check out the review of the American supernatural horror film Countdown 2019. It was directed and written by Justin Dec.

Countdown movie was written and directed by Justin deck and is the story of an app that tells you when you’re going to die. And when the nurse downloads this app it tells her she only has 3 days to live. So she embarks on a mission to find out the truth about this app and see if she can thwart the fate that this app has prophesied.

As massive as a horror buff as I am and as much as I love the genre, I didn’t even know this movie was coming out until a few weeks ago. I had heard nothing about it. I had seen no trailers. It just kind of showed up and I went oh I guess this is the mainstream Halloween movie this year.

There’s been a trend of techno horror. We had unfriended dark web friend requests and even movies like the wonderful slender man seem to have inspiration with the internet. And now we have a movie about a literal killer app and this will shock none of you but it’s one of the worst movies I’ve seen this year.

It’s strangely watchable at times because it’s semi competently hound and the production is better than I thought it would be. And what I mean by that is that it looks like a real movie but the script is well, it’s a script.

This film ” the Countdown movie” seems to be going for comedy. There are scenes that are obviously meant to be funny. There are some that are unintentionally funny but there’s plenty of scenes that are trying to make you laugh. It reminded me a bit of happy draft day. Movie that is billed as a horror movie but is kind of a comedy.

Let’s talk a little bit about that comedy because honestly it’s one of the most cringe-worthy aspects of this movie “The Countdown Movie”. Like there are few films in which I have actually cringed. You know that’s a very overused phrase. Sometimes you hear a joke and You say “oh! that was embarrassing! that wasn’t very good” or”Oh my god! you really just made a fool of yourself” and so now I feel cringed.

But there were a few moments in this movie where my muscles actually locked up and I felt embarrassed to be in a public place watching it with people. That’s honestly true. And one of the biggest issues is that there are an absurd amount of subplots that have very little to do with the tension. That is surrounded by this final destination-like scenario. That you know when you’re gonna die you’re just basically waiting for it to happen. And your constantly afraid of everything around you like it’s going to kill you. That’s the other thing I don’t like about it. It was really kind of a rip-off 5 destination and a lot of ways.

And the subplots eat this movie alive. One of the biggest ones being a priest. That is there for comedic relief. He has a cross tattoo when they walk in on him he’s smoking. He tells so many horrific on funny jokes it reeks of somebody just saying say whatever you want and that’ll be in the movie. He actually says hello yeah hi 5 to somebody. Swear to god I’m not getting it.

Another subplot is it halfway through the movie another character is introduced. You know nothing about him. He just shows up at a cellphone repair shop and all of a sudden he’s in this main character’s life the nurse. And a hint of romance blossoms. I felt nothing from it.

Another is that at the cellphone repair shop. They meet at tech guy and they want to go to him to try to figure out what’s wrong with their phone. First off “what’s up with this app and I’m gonna die, oh my god! I can’t even delete it from my phone. this is really horrible” so they’re at this tech shop and this guy is looking at the phone on his computer and it’s like “damn this app takes up 60 gigs” and she’s like “is that big?” and he goes” yeah like a whole season of game of thrones on your phone big”.

And within the same scene, the tech guy has his phone. He’s apparently downloaded the app as well and it’s told him he’s going to die in a certain amount of time. I believe it was 37 to 40 years, but that’s not really the point. what he says next as the point. He says “do you think the Marvel universe will last for another 40 years”.

The writing in this film is honestly embarrassing. I found myself stifling laughter quite often. And like I said it’s supposed to be funny at times. The actors are fine. You don’t look at the movie think “oh god like what terrible performances”. It’s really it’s the script.

The Countdown Movie is a 90 minute exactly P. G. 13 movie that’s just kind of thrown into theaters to make some money on Halloween and it feels very forced the way it was written. In particular the last subplot I do want to talk about in this review. It’s easily the worst in the whole film.

And that is a forced sexual harassment subplot this woman’s a nurse at a doctor hits on her very aggressively and she’s very clear she wants nothing to do with that. He doesn’t back off at first and she has to push him away. Later I guess spoilers do you know if you really want to see a countdown this part is part of what I just said it’s not that happens early on.

Later he actually goes to the board at the hospital and says she tried to hit on him and he gets her in trouble and possibly suspended and fired. So the guy’s a real bad one. He’s terrible. Like he’s a terrible character. But it kind of becomes the main villain for a while and they go back to this really creepy subplot a lot too easily.

The most cringe-worthy and embarrassing line in the entire film. This subplot has nothing to do with the movie and I know exactly why it’s in there. For the past year I’ve had multiple scripts that I have talked to many studios about and some have shown real interest. I haven’t told you guys that but it’s it’s cool. Like I’m trying to get some things made.

One of the biggest notes I’ve always gotten back is that if you included some sort of social commentary or something that was in the news today. something that people are talking about a lot. That might make your script easier to sell and I feel like that’s what happened here.

My problem is in the storyline. It’s how it’s used in the film the fact that it clearly does not fit into this movie. It just feels like something they were inserted into the screenplay to help it sell better. I’m glad this isn’t the last for a film I’m seeing this Halloween because I actually got tickets to the advanced showing for doctor sleep which is coming out I think on the thirtieth.

At the advanced early thing they’re doing, I’m very excited to go see that because this movie honestly let me down in just about every level. I did not find it scary and very little of the actual humor they were going for work for me. The mythology behind the app is barely discussed. The surface level at best and even then it’s them going to a priest and he says something about ancient Latin.

And I’m like “Is this honestly the one-thousandth time I have seen this in a horror film? ” and again I am all for tropes. I’ve said this before cliches and tropes totally fine. If you can find a unique way to show me them or engage me in them. Then I get excited. you can have 1000000000 vengeful ghost movies. You can have a ton of shark movies. You can have a lot of slasher movies. There are certain horror subgenres that are basically accepted as something that you can see a lot of.

It’s just what you do with those trucks in cliches “how you make it your own”. This doesn’t feel like anyone’s vision. This feels like a slap-together 90-minute PJ 13 horror movie coming out towards Halloween to make a quick Buck.

I’m going to give the countdown movie an F. 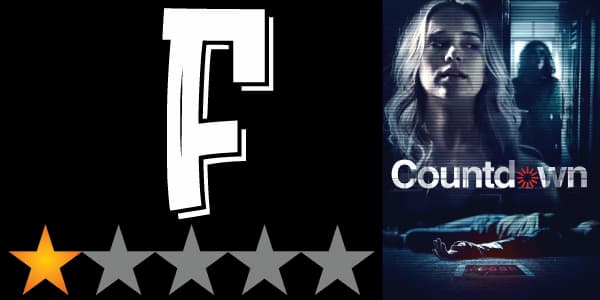 I lost interest in this movie halfway through. And none of the characters invested me their attempts to bring in side characters halfway through with the very force romance didn’t work for me either. And the overabundance of unnecessary subplots just ate away at the pacing up this film. I thought it was a very poorly handled and it could’ve been a lot better even with the cheesy killer after plot.

I thought it should have been brace the humor a lot more kind of like happy death they did which I didn’t even love that movie. But it understood its characters better and the humor of the situation.

And if we’re going to be cheesy. Then just go full-blown cheesy and be over the top embrace that doesn’t try to be both. because this movie tries to be a lot of things that really work for me.

In the end, I would like to thank you guys for reading my Countdown movie review. And wait for my other movie reviews really soon. See you next time.