Confetti Movie 2021 is a Drama, Family film. The movie is rated PG and it’s an hour and 25 minutes long.

This lovely film premiers in theaters on August 20th, 2021. Not to be confused with the 2006 British comedy of the same name.

The film centers around a traditional Chinese family who face a number of obstacles after their daughter is diagnosed with dyslexia.

Education is extremely important in China, and parents will do almost anything to ensure their children’s education because a good education secures a good future for the entire family.

So the movie is based on the director’s personal experience. As the Chinese culture, this movie is very gentle and hopeful.

Zhu Zhu is a bilingual actress and a TV host who got her start as a host on MTV China. She also hosted an English learning show and released her solo album in 2009. Talented Young Woman.

You may recognize her from the movie Cloud Atlas. She’s the only Chinese actress ever to be featured on TC Candlers 100 Most Beautiful Faces for two consecutive years. She is really beautiful, and she does a wonderful job in this film. As a persistent young mother.

The director mutes the color palette to show moments from the past, which is a cliche yet effective technique because there is a timeline that goes forward and backward.

At the beginning of the movie,  Chen Lan, who’s played by Zhu Zhu, hands a Walnut to her child and tells her to eat one whenever she doesn’t know the answer to something when she goes to school.

And it’s an interesting metaphor because a Walnut actually looks like a brain, don’t you think? And the Chinese family’s challenges try to understand their daughter’s brain that works quite differently from other children.

So at the end of the movie, be sure to read the list that’s displayed on the screen that shows incredibly famous and talented people throughout history who have actually had dyslexia.

So there were a few things that I didn’t like. First of all, it is a very slow-moving and some audience members won’t like that.

Sometimes we have to watch the same scenes over and over again as characters repeat the story to other characters, which seemed a little bit unnecessary.

We don’t learn that much about Thomas who played by George C. Tronsrue, who’s one of the American teachers in China who was actually the one who set everything in motion at the very beginning of the story.

And the story itself is pretty straightforward. There are no twists and crazy things that happen.

There’s a lot of Mandarin spoken with subtitles, and so some people won’t feel like reading. And honestly, they are going to be pretty bored if they had to watch this movie, anyway. There’s no objectionable material, and I really appreciate that.

So the themes that were introduced in the movie are education, different learning styles, a mother’s, love and parenting, the question of what is normal and hope, persistence, service to others, and unexpected turns in life.

This movie is a very serious dramatic film. And I think also you will be really focused on reading to see what was being said. 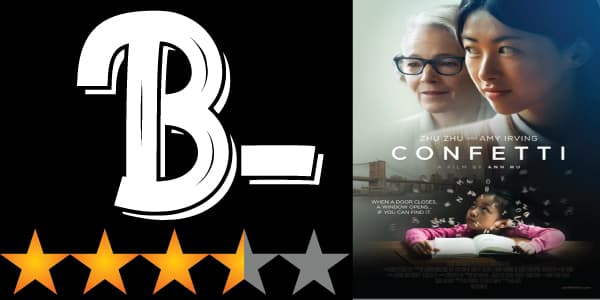 You are going to enjoy this movie if you are interested in education and in China. But if you’re not interested in either of those things, you might be a little bit bored.

Guys thank you so much as always for reading the review of Confetti Movie 2021. See you next time.