CODA movie 2021 is an American drama film featuring a hearing teenage girl who is a child of deaf adults (CODA for short).

CODA movie is written and directed by Sian Heder, the film stars Emilia Jones as the hearing girl, with Marlee Matlin and Troy Kotsur as her culturally Deaf parents and Daniel Durant as her Deaf brother, Eugenio Derbez and Ferdia Walsh-Peelo.

As a CODA (Child of Deaf Adults) Ruby is the only hearing person in her deaf family. When the family’s fishing business is threatened, Ruby finds herself torn between pursuing her love of music and her fear of abandoning her parents.

So after the film won the Grand Jury Prize and the Audience Award at the recent Sundance Film Festival, Apple bought the distribution rights for 25,000,000 dollars, the largest sum ever at the time.

It has nothing to do with Coda (2019 film), the film starring Patrick Stewart as a concert pianist.
In CODA 2021 movie wich means (Child of Deaf Adults) the letters are capitalized to show that it’s an acronym.
This is an English language remake of the 2014 French-language film called The Bellier Family that you could watch. Actually, with English subtitles, you can find it on Amazon.
And by the way, if you don’t have Amazon Prime, click here. And I’ve got a special coupon for you where you can get a free 30-day trial free.

Anyway, this film is filmed in Gloucester, Massachusetts, and has a real small town feel to it, which I really love.

So here are some of the other things that I really loved about the movie. First of all, Emilia Jones is a revelation. She acts, she sings, she sings, and does them all beautifully.

Eugenio Derbez plays the passionate choir director. He’s hilarious in everything that he does, but he also shows a dramatic flair in this role, since the film is more serious in nature and not a true comedy. But I really enjoyed seeing him in this.

I remember when Marley Matlin first took Hollywood by Storm when she won an Academy Award for Best Actress for her role in Children of a Lesser God. Now I probably just dated myself.

She is the only deaf actress to ever win the award. She’s been deaf ever since she was a little girl, but that definitely has not stopped her.

Actors Troy Kotsur and Daniel Durant are also both deaf in real life. It’s really powerful when you can’t hear any sound and you get to experience what it might be like to be deaf. And there are a few scenes like that in this movie, which I thought were great.

There are some truly touching moments that made my eyes still with tears several times. Very sweet.

And I like the title because it instantly intrigued me, and I wanted to know what it was all about. What is CODA.

So let me tell you some of the things that I didn’t like as much or thought could have been done better.

First of all, as I said, this story is very sweet and touching, and yet there’s a lot of crude content that makes it inappropriate for family viewing, which is such a shame because there are some really great messages and moments in the movie.

The movie itself has a fairly simple plot that we’ve seen before. It’s very predictable, but still, the journey is worth experiencing.

There is some profanity, both spoken verbally and in sign language. Teenage girls talk about hooking up with guys. One of the girls we definitely know does, and the other girl we’re not so sure about.

There are adults that talk about Jock itch, and that’s supposed to be hilarious, and they do it in crude ways.

You see a married couple doing it in bed, they have their clothes on. So at least there’s not a whole lot of flesh, but there’s no question what they’re doing.

The dad in the story smokes marijuana. Men drink alcohol in a bar and get into a brawl, and an underage teenager works as a bartender in a bar and explains that she can because the men there don’t know how to count to 21. And that’s supposed to be so funny, but that’s also illegal. So that’s so funny in my book. So some of the humor didn’t really land for me.

There’s a lot of sign language spoken, obviously, and so you have to read a lot of subtitles.

So some themes that are worth talking about after you watch the movie and before are family responsibilities and duties, pursuing your own passion, communication, sacrificing for others, the power of music, courage to face our fears, trying new things, and even community.

I thought it was very sweet and had some powerful messages in it and had just a fantastic cast that we haven’t quite seen before. 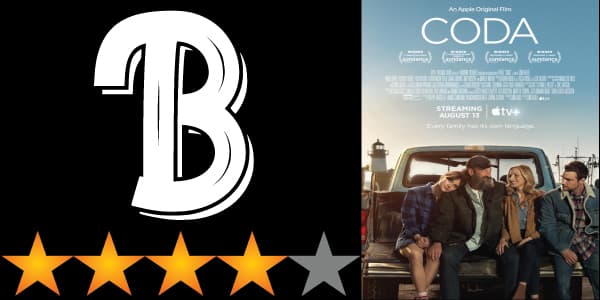 Guys thank you so much as always for reading the review of CODA movie. See you next time.

Check out the trailer of the new drama, music film CODA Movie.