Check out the review of the American pre-Code silent romantic comedy film ” City Lights “. The film is written, produced, directed by, and starring Charlie Chaplin.

The City Lights Move was released in 1931 and was written and directed by Charlie Chaplin and also stars him. This was a major passion project for him and some that he worked on for many years. If you guys are familiar with Charlie Chaplin, he was one of the biggest stars of the silent film era.

His character the tramp or sometimes known as the little tramp or he would sometimes refer to him as a little man. This is a character that’s synonymous with the silent era. He was one of the most famous at the time and one that Chaplin had portrayed in various films and short films.

And chaplains chose to make City Lights as a silent film despite the fact that Hollywood had begun to move towards the talkies. It was a divisive one because people felt at the time that talkies were going to take over and of course they did.

But Chaplin was of the belief that silent films were really what filmmaking was all about him that talkies they would die out in a few years. But I think is real motivation for making this a silent film, was that he wasn’t very comfortable with the idea of this character that he created existing at talking.

He didn’t think that the character would be as funny, because it’s a character that relies a lot on pantomime and expressions. It’s very physical, lots of sight gags. A lot of things that he does in this film are a bit like a dance.

So he was afraid that this character would not work in a talky and he maybe have been right. And never the less we have city lights as a silent film and I would say it’s probably my favorite silent film.

This is a movie about Chaplin’s famed character the tramp who meets a blind woman who’s selling flowers. He quickly becomes infatuated with her and has to try to court her without her finding out that he isn’t rich.

And when they were trying to be friends someone who actually is rich a drunk man who’s trying to commit suicide and he keeps them from doing that. Their role switch quite often and he gets the opportunity to have access to things that only a wealthy man of the time would have, like a car or money to buy flowers from her.

And so now we have a moral dilemma. He loves this girl. She likes him back but she thinks that he is rich and he’s really not. The City Lights movie is one of my favorite romantic comedies if you were to call it that.

In many ways, it has influenced all romantic comedies that have come since then. Especially in its final scene. I have seen countless films with a moment so similar to the way this film ends.

That you can understand why so many people credit chaplain for showing Hollywood how to make films. Or how they can make films that are financially successful also being critically successful because this film was both of those things.

Albert Einstein came to the premier. And we still have a photo of that today and so you can tell that Chaplin was definitely someone that people are paying attention to at the time.

He was already famous by the time this movie came out, but the idea of making a silent film once talkies had been introduced reminds me of how Alfred Hitchcock decided to make psycho black and white in 1960 even though colorized films were popular at the time.

He wanted to make a film that was black and white. Because he felt that that approach to filmmaking had more merit behind. It had more suspense to it. He could get more things out of it then he could from a film that was shot in color.

But what’s inescapable about this film when you watch it today is just how damn funny it is. From scene one, I’m laughing like a crazy person. There are so many sequences that are so simple.

The things that he’s able to do with this character a boxing match, in particular, this dance that everyone’s doing highly choreographed and very well-rehearsed. It’s just so god damn hilarious. And that’s Chaplain.

History has shown us through various interviews with cast members of this film people involved in the production and documentaries about it. That he would shoot sequences far more than other people what he would.

He would do shot after shot take after take to try to achieve something that was in his head. He would sometimes jump into other actors’ roles and perform this sequence exactly how he wanted them to do it.

There was quite a bit of unsettled tension between him and star Virginia Cherrill because the weight chaplain works. He shot this film over the course of a couple of years. And he was such a perfectionist about making everything as good as it could be. That some of his actors including Chero were getting antsy.

And he actually fired her at one point and reshot parts the film with someone else before eventually rehiring her again. This is not the type of filmmaking that could be done today.

Virginia Cherrill today in 2018 would go on her Twitter and say Charlie Chaplin just fired me and it’s horrible and you know Charlie Chaplin would be facing so much pressure from social media.

And the news world to be a better person. Perhaps that’s a good thing but in the long run, his incredible OCD perfectionist brain made one of the best films of all time. And so you have to wonder just at what point did Charlie Chaplin go overboard or did he go overboard.

It’s interesting to view old Hollywood versus new Hollywood. And I read about the production. I watch interviews. I watch documentaries. And I realized that if these exact films being made today, it would be very controversial in the way he handled himself on the set.

But it resulted in a great film and one that is timeless because nowadays there’s a bit of apprehension when you sit down and watch, Even a black and white film. Kids today don’t want to watch movies or old like that even some adults don’t wanna watch older films.

Let alone as silent film one that is told entirely through pantomime music and some sound effects. This actually does have some sound effects. There’s a hick upping whistle scene. There is some sort of like almost like Charlie Brown talking in the background where some people are like a crowd in the beginning chanting.

It sounds almost like a zoo. That was actually Charlie Chaplin making those sounds, which makes it the first time Charlie Chaplin’s actual voice was ever heard in a film. They’re going back to that apprehension that people have about watching a silent film.

I think it’s gonna be boring or that it’s not gonna have any action sequences are anything to invest you in. But from the beginning of this movie consistently, I’m laughing.

In particular, the scenes with Harry Myers who plays the eccentric millionaire. This guy only recognizes the tramp when he’s drunk. When he Sobers up in the morning ” he’s like who are you get out of my house” and it creates some really hilarious sequences.

Chaplin and his cast have crafted a silent film that is drastically funny, extremely well shot. And still holds up today as a film that has clearly influenced tons afterward. His sight gags, the slapstick, his stunt work, his actors are all fantastic.

This film is a labor of love for sure. If you ever read into the production and a lot of people argued and it was a long time coming for Chaplin. But the end result is a classic, that has stood the test of time. 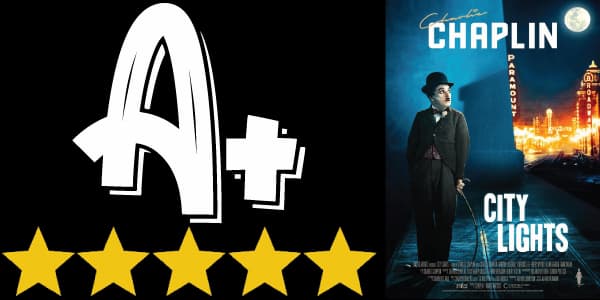 Thank you so much for continuing to reading my movie reviews. See you next time with another movie review.