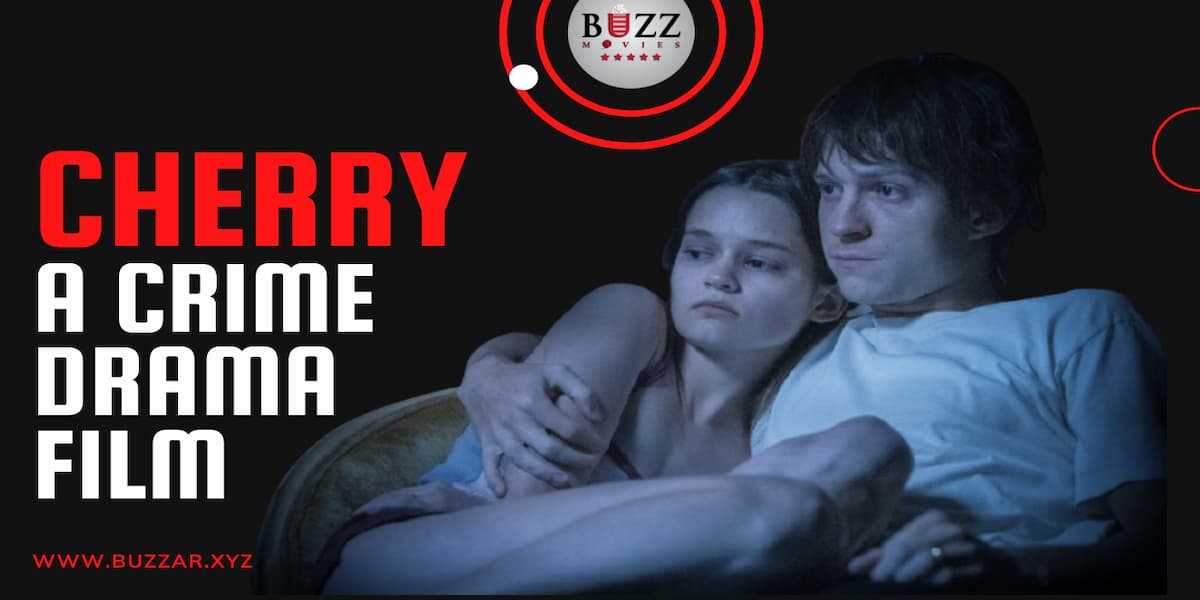 Cherry Movie is a 2021 American crime drama film. The film is  2 hours and 21 minutes. The Cherry film released in theaters on February 26, 2021, and you can also watch it at home on Apple TV+ since it is an Apple TV+ film.

Cherry is directed by the Russo brothers and stars Tom Holland as a man who is driven to become a bank robber. In the style of Forrest Gump, he narrates his journey through the military through finding love becoming a drug addict and eventually robbing banks.

This film was shot entirely in Cleveland which is really awesome. It looks great I recognize a lot of places and I know some people who work on this movie and I love you guys.

Unfortunately, I did not love this movie and I’m sorry if you’re reading this review. Really wasn’t my Cup of tea. This film could have been great.

I think Tom Holland is excellent in the movie. He gives a great performance and he is constantly engaging. He has so much charisma. His character is mostly interesting because of him.

It’s one of those characters that isn’t very interesting on the page and having an A list actor like Tom Holland in the role really helps things a lot.

This is based off of an autobiographical book by Niko Walker, who serves as a producer on this film and while his life is obviously filled with a lot of trauma tragedy and choices he probably regrets and is very happy to be in a position that he is now. It’s not that interesting in this movie. Mostly due to the Russo brothers unfortunately.

I really like their directing. I think they did a great job with the M. C. U. they made maybe the best one of the best certainly with winter soldier.

But they adopted a style in cherry that is so flashy so in your face and so self-indulgent, but the story didn’t really come to life.

Because I was constantly distracted by the way they home this movie. For instance, when Tom Holland is going through various procedures when he joins the military.

He has to get a rectal exam and you don’t really know what we’re looking at first, but the camera is deep in a pink dark cavernous hole. You just see an eye looking through all. And then you realize they stuck a camera in his ass.

Obviously, it was a prosthetic colon. Just choices like that baffled me throughout the whole movie. But the real thing that absolutely tanks this movie for me is the narration.

It is the most on the nose explanatory voiceover I’ve heard in a film in so long. I’ll give you a perfect example of the character you know throughout the whole movie.

He’s one of Tom Holland’s buddies. You see him go on some bank robberies. They drive around town you’ve seen this character for like an hour to 90 minutes or so you don’t really know much about him.

Later in the film Tom Holland has a safe and he really would like to get into that safe, so we called his friend the same guy you’ve known for like an hour or so in the movie.

The narration then tells us I called my buddy because he used to work for a locksmith. I was like oh interesting characterization that I’ve just been informed of.

That such a lazy approach to the way this narration could have gone. The unspoken rule with a voice-over it’s not really unspoken.

Actually a lot of people say this is that if you’re going to have voice over have it enhanced the story in a way that you could not communicate visually.

The film also has a final shot that is so curious to me. It’s one of the strangest miscalculations in tone or feels that I’ve experienced and really the whole movie can be described that way.

The final shot of the movie is right out of Nacho libre a. Which is not expected to say but I couldn’t help but think it. Just it looks like naturally break, it just did.

I’m sure I can’t possibly be the only person on this planet. That will think that.

T here’s things to admire and sherry for the most part the performances are all really strong. The Russo brothers are being extremely ambitious. They’re taking a lot of risks and I always admire that.

Unfortunately none of them really pay off. This film doesn’t really have much of a story. It’s basically guy falls into drugs after being disrespected by the military.

Him and his girlfriend have problems and he decides to rob banks. So it seems like the Russo brothers adopted this very flashy style, that I guess was supposed to maintain your interest over an extremely bloated run time and I just didn’t.

The firm also has a lot of attempts at themes and messages. There’s an approach to the way we treat our veterans but it is so minimal and barely discussed and when it is discussed it’s usually voice over and so you don’t really feel like you’re just being told that.

Also all the banks that he robs have titles like shitty bank or the bank. To be honest I don’t really get it. I have no qualms in saying that I don’t really get what they were going for. It wasn’t clear to me and I think that’s one of the other reasons that the film just didn’t work for me.

There were so many approaches to a theme where I felt like they were just about getting interesting and then they would backtrack. I admire that they’re clearly attempting to do something completely different than a big superhero extravaganza movie, but it is not gonna work for me.

I’m going to give  Cherry movie a C-minus.

The film’s opening in theaters this weekend and eventually it’s going to be on apple TV plus in March I believe so look forward to that if you want to see it.

I would suggest watching it if you can just because it’s weird. It’s just not my thing. I don’t know, it didn’t work for me .

Guys thank you so much as always for reading the Cherry Movie Review. See you next time.