Censor 2021 is a British horror, mystery, and thriller film by Prano Bailey-Bond. Check out Its Review.

Censor 2021 is a new indie horror film from first-time feature director Prano Bailey-Bond. She previously directed The Short Nasty, which no doubt inspired this film.

So after viewing a strangely familiar video, Nasty Enid, a film censor sets out to solve the past mystery of her sister’s disappearance, embarking on a quest that dissolves the line between fiction and reality.

So if you don’t know what a video Nasti is, essentially there was an influx of extremely violent and lurid films that were shared on videocassette, mostly in the 1980s.

And a lot of them were able to bypass the rating boards and they were kind of underground. People watched some really fucked up stuff and it caused quite the public fervor.

And this film takes place in that time period where we have someone who is trying to decide what needs to be cut out of a movie to obtain a certain kind of rating.

She watches incredibly gory, violent, and inappropriately sexual things all day to try to figure out what rating a film should get.

Films like this have almost become their own subgenre. You have blowout the great Brian De Palma film with John Travolta.

He records sounds for movies and he’s working on horror films. Or there’s Berberian Sound Studio with Toby Jones, which is also about sound Engineers’ work on an Italian horror film.

But a plot like this is obviously ripe for horror. Someone is forced to watch the most fucked up things all day, the kinds of stuff that we normally don’t see in a movie.

Because somebody like the woman in the film said, you have to cut that out. Otherwise, it can’t be released with a rating. She’s essentially Alex from A Clockwork Orange, except she’s paid to do it and she kind of enjoys it.

I had a great time with this movie, and it wasn’t just because I got to see it in a theater, which was amazing. I thought this was extremely well directed, especially for a first-timer.

But also the created video nasties they made for the movie are really great and kind of nostalgic. If you ever watched any of the old ones.

They did a fantastic job recreating the feel of those, but it never loses sight of what it is, which is essentially a character study.

This is a movie about someone who is deeply obsessed with something, and a lot of people think they’re kind of insane for continuing to be obsessed with it.

Sometimes the film can get a little uneven because it’s trying to balance that, the fact that she is looking for a sister.

But also there’s this sort of mystery that’s developing with one of the video nasties she watches and a filmmaker that might just be killing people in them for real.

And that’s definitely the more interesting part of the film. Unfortunately, the search for her sister can sometimes feel like it’s on the back burner and not exactly the primary focus.

And when the two kind of converge, I could see some people being disappointed in the finale. There are aspects of it that are going to be polarizing for sure.

But I thought it was fairly ambitious the way she melded those two stories together. Without getting into spoilers, having people appear in the video nasty that maybe aren’t there.

And you’re sort of experiencing it through someone’s POV and they might be not entirely reliable. And I think that’s very frightening. The movie goes to some very deep, dark places when it comes to horror and it’s wonderfully acted all the way through.

The film does owe a lot to those other films that I mentioned, but it’s also clearly very inspired by Videodrome. David Cronenberg’s film, which was also an exploration of what violence in movies could do to people in the 1980s.

And this film also has a body horror scene that very much so reminded me of some iconic imagery from Videodrome.

So it’s not that the film is entirely original, it’s just that it has a unique presentation and a clear, clear focus on character.

And something else the film does very well that’s really hard to pull off is allowed its main character to make choices that you don’t necessarily agree with.

You don’t really condone what she’s doing, but you kind of are OK with it when you have movies where characters are in life or death scenarios.

And they’re trying to survive and they keep doing stupid things, it can get very annoying. And you can check out from the movie and it can just lose you because you’re not following the choices the characters are making.

This film achieves a very difficult balancing act of showing a character make choices that aren’t really good choices. But because you can understand the state of her mind and how she’s becoming increasingly more unhinged, you kind of go with it and you’re OK with some of those choices that you might not normally be OK with. And that’s really hard to accomplish.

Censor 2021 definitely owes a lot to other films of the 1980s, but I think it’s a really, really original vision and I can’t wait to see what else this director does. 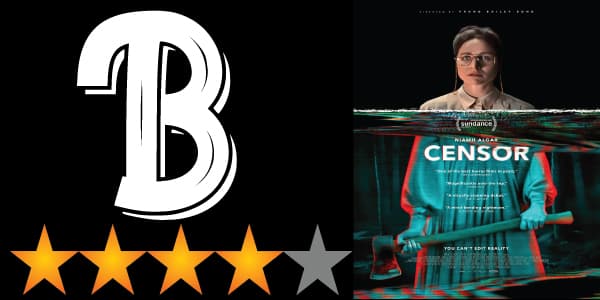 Guys thank you so much as always for reading the review of Censor 2021 movie. See you next time.

Check out the trailer of the new mystery, thriller, action movie Censor 2021.