Brahms-The Boy 2 2020 is an American supernatural horror film. The movie tells a story of a young family moves into a guest house on the estate where their young son soon makes an unsettling new friend, an eerily life-like doll he calls Brahms. 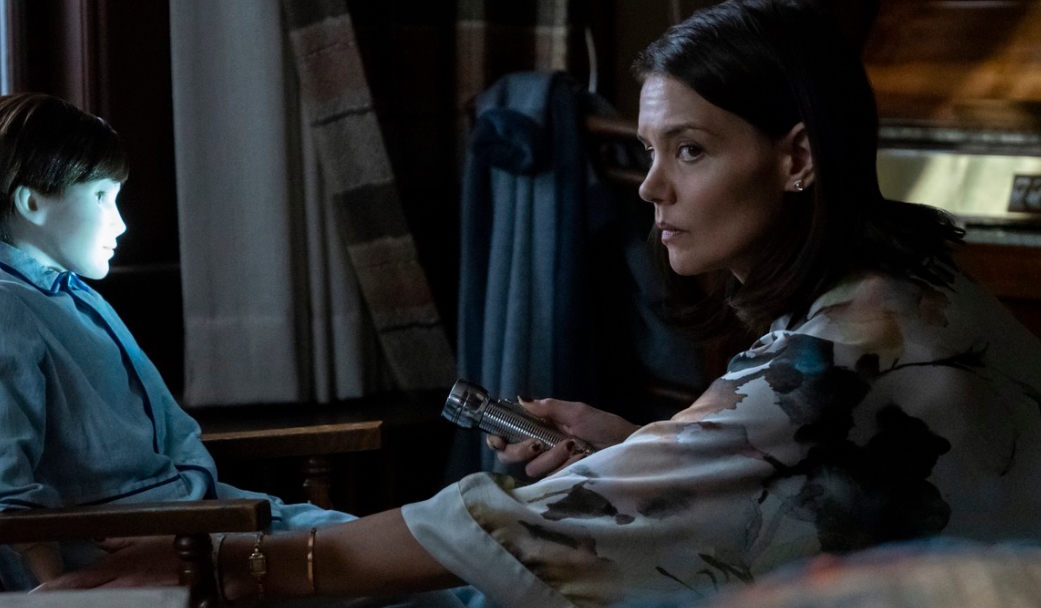 Brahms-The Boy 2 Movie 2020. This film picks up with a new family that has fled from a traumatic event. A burglary that led to an assault.

They’re staying far away from the city temporarily at a house and their young boy who no longer speaks after said attack digs up the porcelain doll named Brahms.

And soon after a lot of terrible things start to happen to this family. As the kid becomes obsessed with the doll.

That’s why we have a sequel to a movie that at best had a lukewarm response. Even people who liked this movie, nobody is going to put the boy on their list of best horror movies of all time. it’s just that’s not gonna happen.And yet money talks and so we have another one.

This time starring Katie Holmes who is pretty good in the movie. I would say she’s actually the best part of the movie. In fact, if I’m going with positives first all of the actings is good.

The young actor is very good. The husband’s very good. Ralph Ineson from the witch is in the film and as usual, he’s great. But this movie doesn’t really have permission to exist and I think the film knows that.

Because the first movie had a very final ending. An ending that makes you think differently about the rest of the movie and ending that I didn’t really think made any sense.

But it sort of takes the rest of the film and says I’m looking at that there are different light. If you haven’t seen that first film I’m going to spoil it now that’s your warning.

Throughout the entirety of this first movie, this in-home babysitter is hired to take care of a porcelain doll who has all of these rules, his name is Brahms.

And for a lot of the movie thank man, this is like some Annabel, this dolls possessed is doing things just moving around this is really crazy she needs to get out of there.

At the end of the movie realize that there’s actually an adult man named Brahms living in the walls of that house controlling that doll moving it around.

He’s the one who takes the food away. He’s the one who has all the problems in the issues. I told you that because I want to say that if you really like that film I’m not seeing you like this one.

Because this movie takes Brahms and within the first like 25 minutes you see the doll move. His eyes move, it happens a lot . And there’s nobody around.

You know that they are now retted conning the most of that ending and saying actually no the doll is possessed. And so for most of this movie you’re aware that this doll is now this entity that’s controlling this kid or influencing this kid.

So if you really like to the first film. I’m not seeing this sequel do anything for you either. But the majority of people felt the movie was kind of bad.

So who is this movie for. It’s not for fans of the first one because it’s kind of pretending like that didn’t even happen and similar to the first one this film also has a third act reveal of sorts that make you think differently about everything that’s ever happened in both of these movies which also makes the first film make even less sense. Which is weird to me.

Because oftentimes, when you have a horror movie that is moderately successful as the first one. Studios, go oh yeah! we could maybe have a franchise on our hands.

The writer and director usually come out no like actually we kinda ended it like it was pretty final like they smashed the doll in the boys in the wall and it’s kind of done like don’t worry about it okay we’re gonna make another one.

That’s usually what happens, but this time the exact same writer-director have made this movie. Which is pretending like their first movie. Was like a lot of misinformation.

Like when you watch the first movie now having seen the second one the entire first movie now feels like one giant red herring. This one has necessary dream sequences when they don’t know what else to do.

They want to scare you they’re following that scare every 10 minutes role and so Katie Holmes has to nightmares that lead to nothing and the opening assault burglary sequence feels like an afterthought.

A seen designed to give the boy some kind of trauma so that he won’t speak anymore. He only speaks while he writes on a note pad.

And a scene designed to make Katie Holmes feel bad for most of the movie. When you don’t really understand exactly what happened.

She walks downstairs early in the movie and there’s like this extremely exaggerated theatrical shadow of like a burglar or standing behind her looking like a Michelin tire man.

And an attack happens and then we fade out and we’re not exactly sure what happened. We don’t know how far that attack went. Until she just blurts out that was a randomly senseless burglary.

Well, thanks because I didn’t actually know what happened and so you just said that even though it’s like 45 minutes into the movie.

And without giving anything away if you want to see the movie there’s another reveal that happens towards the end. That makes you think differently about something and that creates a lot of questions.

Many many questions for how the doll was found and why was the doll buried? When I see a movie like this, with a title like this which is areas, by the way, I’m reminded of a few things.

One thank you Mike Flanagan Stephen King for calling your book and movie doctor sleep, not doctor sleep Colin the shining continued.

But I’m also reminded that even if you made a film that some people like a studio can still say you know what I’m glad you watch that but we don’t care that you liked it because we’re just going to make a movie that pretends like that one didn’t happen we know most people actually didn’t like it, but we’ll just pretend like this is a new thing so we can start a franchise right.

Because this movie definitely sets up franchise potential. This movie got made because people got paid. I am using that again. I’m gonna give Brahms-The Boy 2 Movie 2020 a D-plus.

This movie needed to prove why it exists beyond just the possibility of raking in some more money and it didn’t if this movie was really really good and it still retcons the first one.

That would be one thing I could sit here and be like wow they realized that the first one was kind of mediocre and they just went in a completely different direction and changed it entirely.

I’m reminded of the Friday the thirteenth movies. They did that a lot with Jason the first few movies kind of figured out what it was you know.

This movie is just another movie that has the doll in it. Guys thank you so much for reading Brahms: The Boy 2 Movie review. See you next time.