The new film Blast Beat 2021 drama film is about two brothers immigrating to the U.S. from Colombia and their coming of age experience in the late 90s, early 2000s.

So does Blackstreet have anything important to say about the immigrant experience in the U.S. and does it hold up to the greats in this classic genre?

When a family leaves their native Colombia for the United States in the summer of ’99, a metalhead science prodigy and his aimless younger brother struggle to align the American Dream with their new reality.

I was immediately drawn to the new film Blast Beats because, as I said prior, I am a huge fan of the coming of age genre, and this film really seemed to bring something unique to the forefront by tackling the immigrant experience.

I was also really curious to see the film do this through the eyes of brothers who are also siblings in real life.

What I can say is this, although first-time feature director Esteban Arango makes some rookie mistakes in his debut, Blast Beat is full of energy, passion and the two central performances are outstanding.

Mateo Arias plays Carly, a science and mathematics prodigy who also happens to be a big all metalhead.

His younger brother, Mateo, played by Moises Arias, who is actually older than him in real life, is an aimless troublemaker who starts off the film with a run-in with the law in Colombia right before he heads off with his brother and mother to meet up with their father in America.

The two brothers are always at each other’s throats, and tensions begin to worsen as Cardelli seems to be finding his place in the States. While Matteo feels completely lost in trying to fit in with the norms of this new society.

Blast Beat is written by Esteban Arango who emigrated to the U.S. in the 90s with his high school best friend, Erick Castrillon. So there is something about this movie that feels like it hit very close to home for the filmmaker.

It is also based upon the 2015 short film of the same name, which always tends to make me nervous because many a time I feel like the feature film ends up struggling with padding and excess to fill its runtime when it is much more suited in the short film format.

Luckily for Blast Beat, there is easily enough material here to feel like the feature-length was warranted. I would even go as far as to say as there was, even more, I was yearning for when the film ended.

What I think this film has to offer that is different and unique in this coming of age space is a personal story about the immigrant experience in the U.S. and the pursuance of the American dream.

We just saw this done to great effect and to universal acclaim and last year’s Ben-Ari, but I was really looking forward to this story, as it’s told through the eyes of two young men who are also grappling with adulthood.

While I think Arango misses the mark in a lot of ways with his telling of this immigration story, with the extortion in Colombia, the anxiety of being drafted into the army, the crooked lawyer taking advantage of the family, and the threat of deportation all being brought up but never explored in a satisfying way.

I do think he hits the nail on the head with one aspect of this family’s tale, though, that the pursuance of the American dream is different for everyone.

The destination to some might come easy, while others might struggle and be completely overwhelmed by navigating the road to it. Every person’s journey is different and that is OK. And Arango has enough love for his characters to show this in a genuine way.

The Arias brothers are both superb in their roles as well, really bringing authenticity to the film, though they are both completely different and turmoil because of that boils to the surface at nearly every turn. Mateo and Carly’s love for each other and the familial bonds that tie them together is what gets the two through the hardest parts of their life.

The two Disney Channel albums, Chemistry with each other are absolutely palpable, but their screen presence alone bodes well for the both of them taking on more meaty adult roles in the future.

Unfortunately, the rest of the cast is not given much to do, and some of the casting choices are questionable, to say the least.

Which I was already having a tough time getting over with the Arias brothers, as they are certainly not of high school age.

We are also given multiple love interests for the boys, but they are so thinly developed and seemingly pop in and out of the film out of nowhere that they only seem to be placed here out of necessity rather than bringing anything to the story.

The editing of the film is also extremely haphazard, and although sometimes that does add to the disorientation of the brother’s displacement in the. Mostly just makes the film feel very messy.

I also couldn’t help but wish that a Rongo had created a more intimate film rather than one that uses heavy metal music and melodrama to amp up the emotion of the story. 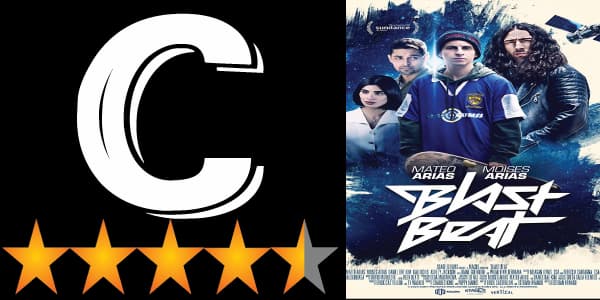 Although the film struggles with editing, its messaging, and some pencil-thin side characters, Blast Beats is worth recommending for its unique spin on the coming of age tale and because of its deeply felt performances from its two leads.

Blast Beat 2021 film will be available for you to stream wherever you rent your movies this Friday, May 21st. You can also watch it on Apple Tv.

Guys thank you so much for reading the review of the new drama film Blast Beat 2021. See you next time.

Check out the trailer of the new  American, Drama film Blast Beat.