Black Widow 2021 is an American superhero action film based on the Marvel Comics character of the same name. Check its cast, trailer, and review.

Black Widow is directed by Cate Shortland. And finally, after her introduction in Iron Man two is Natasha Romanoff’s first solo film and probably her last because she died.

They had to go back in the past to make a solo movie, which is something they should have done a long time ago, but they realized their mistakes, so they made one.

This film follows Natasha Romanoff as she meets up with some of her former associates and decides to go down a dark path of revenge headed straight for someone responsible for a considerable amount of her trauma.

Here we have another film that was severely impacted by the global pandemic pushback multiple times.

Finally, it’s coming out. It’s gonna be on Disney plus with their premiere or whatever it is, and in theaters as well, which where I got to see it today.

I’ve wanted to see a Black Widow movie ever since for seeing her in John Fabro Iron Man 2. And I was surprised how long it took to get a Black Widow film.

Because it just seems so easy. She’s a spy with incredible skills, and it would just be really great. And I don’t know why it took so long.

Some people have argued that it wasn’t until the success of Wonder Woman that this became possible, but who really knows? Anyway, people could be wrong.

Nevertheless, we finally got one, and I was very, very much looking forward to seeing it. I think Scarlett Johansson  is as great as her character, and I’ve loved her contribution to the MCU over the years.

Unfortunately, Black Widow is everything that I feared it to be. It doesn’t really feel like a film that exists because it was a story that somebody was yearning to tell.

It feels like a film that exists because fans have been clamoring for it for a very long time, and now is an opportunity to do it while also tying it into future MCU projects, which is exactly what I hope it wouldn’t be.

In every way, Black Widow feels like a filler movie, and it shouldn’t. She is an awesome character with an extremely interesting backstory.

And while the film certainly deals with that backstory, it does so in a way that I found incredibly boring.

Unfortunately, the film has a tough time justifying its existence. From the opening cover song of Smells Like Teen Spirit that goes over the main titles to the fact that the movie takes about 40 minutes to really reveal what it’s actually about.

I actually checked my watch. The movie started at six and at about 6:40, I realized what the movie was trying to say and what the people in it were trying to do.

The first 40 minutes is a lot of setups, and Unfortunately, Natasha in the film is mostly relegated to being an observer of events. It’s not like she’s necessarily on a mission until about 40, 45 minutes into the movie.

For a long time, she’s just kind of in hiding, and other people are kind of yanking her arm, saying, Hey, you should probably do something or you should be involved in this. And she’s like, Yeah, I like hiding. It’s fun.

And then they’re like, No, you shouldn’t because it’s personal. And it’s like, Okay, well, it’s personal. I’ll do something. And it just felt like a very lazy way to tell a solo story for such an intriguing character.

When your protagonist is essentially forced into an event, and the motivation is so slight until all of a sudden isn’t at one point, it’s very difficult to get wrapped up into that story.

I very much experience stories through the characters. Like if I really care about the people I’m watching and I feel like I’m sort of on this adventure with them, then I’m going to enjoy the film.

The math of why Natasha is doing what she’s doing in this movie makes sense. You can say, well, of course, she wants to do that because look at all the stuff that happened.

But the movie has a really hard time making you feel that way. The things that the characters do technically make sense for who they are. It’s just that I wasn’t enraptured by any of it. And this is just kind of a stupid side point.

It’s very clear to me that the writer of the film has no idea what getting a tattoo is like because if you are Armwrestling someone while getting one, it’s going to look like scribbles all over your skin.

Another unfortunate thing about the film is that the plot dictates that the main villain be kept off-screen for a long portion of the movie because it’s about finding where that person is and nobody seems to know.

And so there’s not much of a villainous presence, which is why Taskmaster was in the film, probably to be sort of a sub villain along the way. And so the film didn’t really have much of an antagonist going forward, either.

The action sequences as well left a lot to be desired. It felt like a lot of basic coverage. You have many different takes and angles of things, and they cobbled the scenes together.

There wasn’t a single action scene stood out to me as special or impressive. It felt very basic, and there were quite a bit of stunt doubles involved. Unfortunately.

What is better about the film, though, is the human stuff, especially Florence Pugh and her relationship with Scarlett Johansson in the film.

They both work very well together, and the human side of the movie is much more well realized. There’s a few excellent scenes in the film that’s just them kind of hanging out and talking.

Florence Pugh is easily the best part of the movie. She is wonderful and very clear that they want to do more with that character, and they should, because she’s excellent.

She has probably all the best scenes in the movie, especially one early on in the sort of convenience store where she questions why Natasha always does certain poses.

There were a lot of very obvious corporate choices behind the scenes. You could tell that some things were perhaps changed in the post when a potential issue was brought up.

For instance, there’s a scene where a character is chained down and a bunch of doctors are surrounding this character and they’re about to operate on this person.

The character breaks out of the chains and basically kills all the doctors, or at least names them severely. Now, I could be making assumptions here, but that’s probably what happened in the original cut.

But in the film, you have this doctor dubbed line where he says “Keep her awake for the cranial incisions” It was an obvious choice to make the doctor seem incredibly evil before this person kills all of them.

Because that would be bad if she kills people who are about to kill her. Unless we established that they are really evil.

Choices like that always bug me because I can always see it. And you can just tell that one, what if she had just woken up and murdered all the doctors who were about to operate on her brain? That would have been fine. I didn’t need that.

Speaking of cheesy lines, the movie has potentially the worst line of dialogue I have ever heard in the MCU film.

It’s Unfortunately a bit of a spoiler, so I’m not going to say it, but it occurs in the third Act between our hero and the villain, and it’s sort of an explanation for why the hero is unable to do something.

So when you see the movie, you’ll know what I mean? It’s just it was rough and I couldn’t help but laugh, and the laugh was tinged with sadness because this film could have been great.

It could have been so much better than it is, and they just kind of made a contractual movie that feels like a placeholder for other things in the future.

I am going to give Black Widow movie a C. 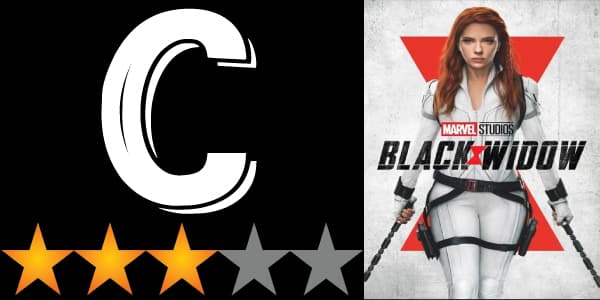 David Harbour and Rachel Weisz are also pretty good in the film. Harbor, in particular, is very, very funny in the movie.

The comedy, as usual with the MCU, works pretty well, but the story, the impact that it could potentially have on Natasha as a person is so little.

Because we know what happens next, and it just feels like they made the movie because they felt like they had to and they didn’t really want to.

And so they decided to just use it as a way to market other things they’re working on, and it just felt kind of icky to me.

Guys thank you so much as always for reading the review of the Black Widow movie.  See you next time.