Birds of Prey is a 2020 American superhero,  adventure, and action film. The movie tells a story of Harley Quinn joins superheroes Black Canary, Huntress, and Renee Montoya to save a young girl from an evil crime lord. 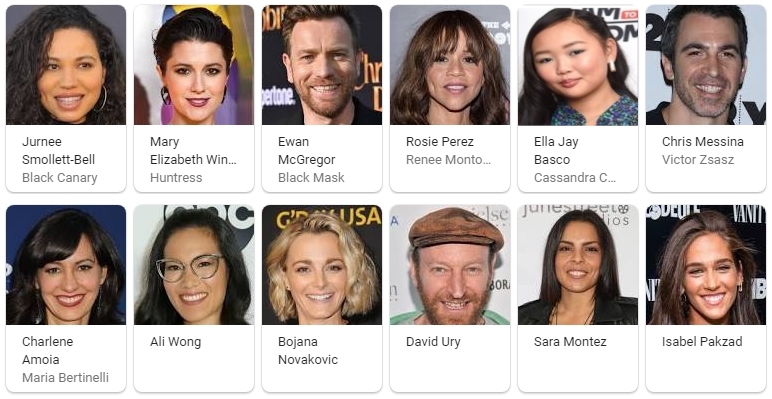 Birds of Prey Movie sees Margot Robbie. Once again reprising her role as Harley Quinn. She was easily the best part of suicide squad, so it only makes sense.

And after breaking up with the joker, she joins black Canary huntress and Renee Montorio to save a young girl from an evil crime lord also known as a black mask played by you and McGregor.

Since the suicide squad didn’t really work for most people. This seems to be DC and Warner brothers attempts to take what they were trying to do with that film.

They take a group of people who don’t really have the best moral compass and pit them against somebody who is worse than them while trading a lot of one-liners and being a little edgy.

Except for this time we actually get our rating and we have a new group of people but they took the one thing about that movie that really works and put it in this one.

Margot Robbie is once again fantastic as Harley Quinn. I can’t imagine a better portrayal of her in live-action. She’s great in the fight scenes. She’s suitably psychotic and unhinged in all the right ways.

And this is strange because it’s not really a birds of prey movie for a few different reasons. I’m not super well versed in the source material I’m not going to act like I am, but I do know that there have been a lot of changes.

Pushing that aside because that had absolutely no effect on me. I’m only bringing it up because it might on you if you love these characters.

The main reason this doesn’t feel like a birds of prey movie to me is because it’s a Harley Quinn movie. This is absolutely a movie focus entirely around her and the whole team up thing happens way towards the end of the movie.

In fact almost the end of the movie and so it doesn’t really feel like a birds of prey origin story even. Because so much of it is centered on Harley.

And the first like 20 minutes of the movie is basically she’s very bitter about the joker and she’s causing a lot of problems as usual.

And it’s interesting because as I watch this movie I couldn’t help but think about the fact that most of the movie or on the side of a psychopath who is a murderer.

They definitely doll her down a little bit. There’s an admittedly awesome action scene where she breaks into a police station and she shoots a bunch of cops but she’s using those dummy rounds.

So they do try to make it seem like she wouldn’t necessarily just kill random people. Even though she does plow truck into a chemical factory in the beginning of the movie without even knowing if there are any workers in there.

And could have potentially killed hundreds of people but we don’t really know, because that’s not important to the plot.

So I couldn’t help but think about the initial reaction to the joker movie. The fact that so many people were complaining that we were watching a killer or siding with someone who decides to become a killer and he’s our main character.

I kind of felt the same way throughout this whole movie. I mean Harley Quinn’s a cycle path. She was jokers right-hand girl for a long time.

The idea that we’re watching what is basically a Harley Quinn movie doesn’t bother me in the slightest. In fact, I found that pretty entertaining.

I’m just surprised that so many critics change their tune so quickly if all you do is shift the movie’s tone from serious to light-hearted. It’s this will have a critical to me I guess.

where this movie shines is its action sequences. A lot of the fight scenes are filmed very wide you can see everything that’s going on the stunts are really impressive.

It’s also a very colorful movie. The cinematography and the color palette is really expressive. Which is in the police station shooting those dummy rounds. They’re loaded with confetti and blue and a red burst of smoke and so that the movie looks really wonderful.

Where the movie falters for me was the characterization. They focus heavily on Harley Quinn and you understand her psychosis and what she’s going through and they do a pretty good job of putting you in her head.

Sometimes too much in your head with some very excessive voice-over, that makes the movie bounce back and forth like a pinball in a machine.

You never really feel exactly like you’re watching a movie that has a plot that’s continuously moving. There’s a part about 30 minutes and where she says hold on for you to understand the importance of this I’m gonna have to take you back a little bit.

And then we watch like another 15 minutes maybe before we revert back to where we just were and it can be hard to follow sometimes.

That could be because they’re trying to put you in the mind of Harley and sort of make you feel how chaotic her brain is. But to me, it’s the most simple way of telling a story. You have a character narrate every single bit of it.

You don’t have to show that much happening to characters if your lead is telling us everything and so it’s harder to get in dear to them.

The characterization is weak as a result. Ewan McGregor is definitely over the top as Black Mask. But again I don’t really know anything about him. He’s just kind of a really terrible person.

And so yeah you want to see him get punched in the face and taken out, but you don’t really know why. It’s just because he’s an asshole. So I don’t really think there was a lot of care given to developing these characters at all throughout the course of the script.

It’s a really impressive looking movie and it is a fun movie to watch if you want to sit back and watch these people kick people in the face a lot.

But for the most part, I just couldn’t get behind any of the characters except for Harley Quinn because there are very little attempts to make us care about them.

If you have a guy who’s an asshole and he’s cutting off people’s faces which is what he’s doing in this movie and he’s just terrible that everyone including his own associates. There’s just nothing interesting about him.

And that’s one of the biggest issues with taking a story like this and having your main characters. They are not really heroes. It’s like yeah Harley Quinn’s definitely kill people before and she’s certainly a criminal but that guy is way worse isn’t he?

It’s that ocean’s 11 things. Oh yeah, you’re with all of the criminals but you’re okay with that because Andy Garcia is a bird.

And unfortunately, that only works if your team is as entertaining as saying the team in ocean’s 11. It only works if you really truly care about the back and forth between them and the dialogue just is not strong enough.

It’s just not there and I haven’t really gotten to my biggest issue with the movie yet. And it’s basically that it’s so plot driven and so not character-driven. That you expect the plot to be something kind of special.

But it’s literally just a kid who’s a pickpocket stole a dime in from the wrong guy and the guy once the diamondback I have seen that so many times in movies. Maybe not in that exact way.

But the idea of hunting for a specific diamond or somebody needs a jewel that was taken it’s just the most overused plot. And when your movie is completely plot-driven and your plot is that basic, I had a hard time caring.

Although, I like looking at everything in this movie and I think that it was directed very well and I was surprised honestly to see that it has such a high Rot tomatoes rating until I clicked on more info and saw the average rating.

You know if you have 200 people that say in movies okay and every single one of them think it’s okay it’s still going to get 100 percent.

And I’m trying to think too heavily into the whole rotten tomatoes you know critic thing, in fact, I rarely even read other people’s reviews until I’ve done it myself.

But I couldn’t help but see the tomato meter notice that’s higher than the joker movie. That’s about the same as Wonder Woman so this must be definitely on the higher end of DC films.

But I like talk were manned and shows Sam and Wonder Woman more. I’m to give Birds of Prey Movie 2020 a C-plus.

Guys thank you so much as always. Look forward to more reviews very soon. See you next time.