Beckett 2021 is a Netflix  Action Thriller Drama film directed by Ferdinando Cito Filomarino. It is an hour and 48 minutes.

While vacationing in Greece, American tourist Beckett (John David Washington) becomes the target of a manhunt after a devastating accident. Forced to run for his life and desperate to get across the country to the American embassy to clear his name, tensions escalate as the authorities close in, political unrest mounts, and Beckett falls even deeper into a dangerous web of conspiracy.

Going into Beckett, I had not seen the trailer and all I knew was that it starred the extremely talented John David Washington and it was from the assistant director of Call Me By Your Name.

So I was pretty much expecting a well-acted and gorgeously shot film, and I most certainly receive those things in spades.

However, I was not at all prepared for Beckett to be the brutal intent and captivating masterpiece that it turned out to be.

Ferdinando Cito Filomarino’s film is an ode to the paranoid political thrillers of the 70s. The hyperrealistic filming techniques create a raw and visceral feeling throughout the entirety of Beckett.

The overdramatized and highly impactful score by Ryuichi Sakamoto takes you straight back to this overwhelming notion that you are not watching a film of this time but from era’s long past.

The on-location shots transport you immediately to Greece. In all of its beauty and ugliness. As a viewer, you cannot help but put yourself in Beckettshoes as he doesn’t understand the language, the terrain, or the politics of this country. And just as our lead protagonist is terrified and lost, we feel the same.

Some people will be put off by the slow pace at the beginning of the film, which are the only moments that Beckett is allowed to breathe.

But let me promise you this, once the plot kicks into high gear, this movie never lets up. The tension is heightened as the stakes are constantly being raised, and the film never allows you to say, see where it is going, which leads to an experience that can be at once overwhelming, yet exhilarating in its uncertainty.

John David Washington Although a relatively new performer on the scene, continues to prove himself time and time again, the actor is constantly taking on difficult roles that push him to the brink. In Beckett, he pushes himself past the brink.

This character is put through hell and back, and the physical demands of this performance art are extraordinary. And although Beckett strips him of much dialogue, just like what Washington had to deal with the antenna.

Unlike in that film, I felt a true connection to this protagonist. In lieu of his struggles. Through all of the blood, sweat, spit, and tears, Washington has fully immersed himself in this character, and it is astounding to watch.

Beckett is a tour de force from the very beginning all the way to its powerful ending.

Whether you have nostalgia for films from eras long past are fascinated by political intrigue or are a sucker for heartstopping, thrill rides, profound character studies, or brutal action adventures, any lover of cinema will most certainly find a deep adoration for this Netflix original.

They really don’t make movies like this anymore. Or I guess in the case of Beckett, they do.

So I am going to give Beckett Netflix Original Movie a B. 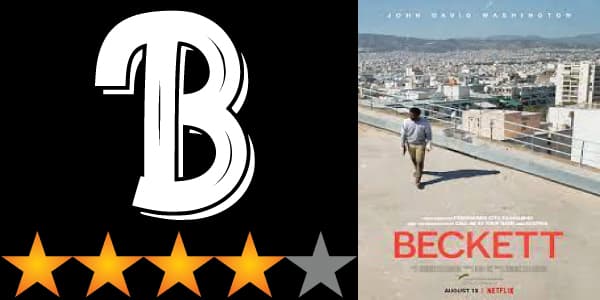 A brutal, thrilling, and beautifully shot owed to the paranoid thrillers of the 70s. Beckett is a master class of filmmaking that Cinephiles will rejoice over.

Guys thank you so much as always for reading the review of Beckett 2021 Netflix movie. See you next time.