Batman The Long Halloween Part One 2021 is an American Adventure, Action, Animation produced by Warner Bros. Animation and DC Entertainment.

Batman The Long Halloween Part One

Batman, The Long Halloween Part One is a new animated film from DC Coming to BlueRay. This is based off of the famed graphic novel in which Batman investigates a series of murders that only occur on holidays.

Aided by James Gordon and Harvey Dent. They try to identify who the killer is and see if they can stop him whenever a major holiday comes around.

I don’t normally watch all the DC animated films because they vary in quality immensely. Some are fantastic, like Flash Point Paradox, and some should have been great, but just weren’t like The Killing Joke, and so I’ve never really gotten into them that much.

That being said, The Long Halloween is maybe my favorite comic of all time. It’s certainly one of mine, and I loved it for years, and I’ve always hoped that there would be a film adaptation of it.

Granted, I was hoping for a live-action adaptation, but still, I wanted to see if DC could pull it off. They have changed their animation style, I think for the better.

They’re using thicker lines now. Everything seems deeper and darker, and it looks far better than it used to. In fact, so much better.

I don’t really understand why they weren’t just doing this from the first place. So immediately one of my biggest issues with a lot of the DC animated films was solved within the first few frames.

Because you can tell they have put a lot of work into this animation. Not that they weren’t before. It’s just that there was a certain kind of TV quality to the way some of those movies looked, and not even as good as the original animated series.

This film looks much better, although there are a few things that I noticed about the animation that I’ll talk about in a second.

But of course, the thing I was most concerned about was the story. Are they going to do it justice now? Naturally, this is half of a story. Sometimes that can be incredibly annoying.

But in the case of this graphic novel that is so sprawling and so filled with information and detail, it makes sense that they would spread it into two films.

It was something like The Killing Joke, which was a fairly short story. They were straining to make a feature film out of that, and they added so many unnecessary things, especially early on.

This film takes its time with the story. In fact, certain scenes play out slower than perhaps you might think they should. Even at 85 minutes or so. However long this movie is.

There are some scenes that, especially when it comes to dialogue, there seems to be a lot of unnecessary pauses, a bit too many beats taken in between sentences, and that could just be the editing.

But you can tell they’re trying to draw things out, and it works to create an aura of suspense and tension around these killings.

But there was a sense to the edits where it just felt like it was a bit too slow and I’m not talking about pacing. I’m just talking about sometimes shots are on screen for too long.

But my nitpicks aside, I would say they did the story justice so far anyway, I’ve only seen half of it. They did a fairly good job at recreating that while also adding some things that in some cases actually improved upon it.

For instance, in the comics, Batman has this scuffle with Catwoman early on, and in the comic. It’s a few panels.

In the film, they have an extended chase sequence on top of a train and over many rooftops. And it was quite thrilling.

In the comics, sometimes James Gordon will hint that Harvey Dent might be having some problems at home with guilt at his wife.

And you don’t always see those problems. In the film you do. You see a lot more of the drama that’s going on with those characters at home.

So where a comic can be kind of beautifully tight and everything is just really contained, and you only get the needed information that you truly, truly need to understand what’s going on amongst beautiful artwork.

A film can sometimes take those panels and really expand upon them, sometimes not for the better. In the case of this movie, I think they actually did a really good job at bringing just a little more depth to an already great story.

As already mentioned, when you cut something into two parts, especially when it comes to a movie historically that’s gone very poorly, you always go into part one knowing you’re not going to be fully satisfied.

You’re only going to get little bits and pieces. But with this film and the upcoming one, which obviously I have not seen yet. They’re coming out in such a quick time period that it doesn’t really leave you.

It’s almost like a TV show, really like you have the one episode and you have a cliffhanger and you’ll get the resolution soon enough. It’s not like you have to wait a year.

And like I said, it does make sense that they’re taking their time with such a sprawling comic book. It’s got a lot of detail and vitality in it. So I like that they’re not just trying to cram it all into one film.

Interestingly. This one’s PG 13 and the next one has been rated R. So I’m assuming there’s going to be some buddy shit going on, and I’m looking forward to that. Hopefully, it’s actually legitimately rated R.

And not just like the way these animated movies have randomly been rated R lately where there’s like one shot that’s kind of bloody and then nothing else.

And it’s like, why is this rate R?  This kind of shit used to be PG when I was a kid. I was happy with the way they treated the story. But I also think that someone who’s never read the comic can still be entertained by this.

You don’t have to have read the comic to understand this story. There are clearly some scenes that have been added to kind of beef up the action nature of the film and give it a little more of a fun vibe.

But it’s dark, it’s violent. The characters that need to be tragic are. Falcone’s son that he hates and doesn’t give any respect, is an incredibly sad character, and they do a great job bringing that to life.

But I mentioned earlier that I would circle back to the animation because there is one thing I want to pinpoint. I understand that things are not done exactly the same way as they used to.

I love to watch cartoons and animations from the 80s and 90s. And you can see imperfections on the screen within the cells of the animation. All of that adds something to it.

I believe nowadays most of it is done on the computer, and there’s an attempt to create something in the computer that looks like it was hand-drawn and you’re never going to fully get that experience.

This is the reason why all of Hayao Miyazaki’s movies are so gorgeous is because he’s got the pencil grit underneath his fingernails. You know like he’s doing it himself.

To be clear, this isn’t for the whole movie. It’s just for a few scenes, a handful of scenes. And it’s possible that maybe they just didn’t have the time they needed to finish some of those scenes.

That is often the case. I was talking to a friend of mine who’s just a genius with visual effects, and the common complaint is usually that they just don’t have enough time.

Almost every visual effects artist wants to get their work to a place where it’s perfect and where nobody will ever say what I just said about the movement of their fucking arms or whatever, like a little asshole on YouTube.

But for all of them, they don’t always have that time and they’re under a deadline and they have to finish when they finish. Or maybe they thought it looked good and it kind of doesn’t.

That could always happen to nitpick aside, most of my worries were calmed by watching Part one. There’s no Super unnecessary stuff.

There are some added things, but I think for someone who had never read the comic. That’s going to work just fine. I think they did a really good job actually setting up part two. And I’m hoping that Part two is just a little bit better than this,

I’m gonna give Batman The Long Halloween Part One a  B. 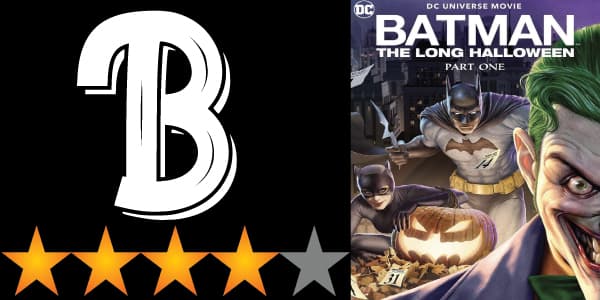 Batman: The Long Halloween – Part One Release Date (Streaming) is on Jun 22, 2021. So you can watch it on Amazon Prime.

Guys, thank you so much, as always, for reading the review of Batman: The Long Halloween – Part One. As soon as Part two comes out, I’ll check it out and have a review for you guys as always, you’re the best. See you next time.

Check out the trailer of the new American animated direct-to-video superhero film Batman: The Long Halloween Part One.