Bad Detectives 2021 is a Crime, Mystery, Thriller film directed by first-Time filmmaker Presley Paras. The film’s original title is Year of the Detectives.

This movie is rated R and it’s only seventy-two minutes.

In a nutshell, called to mourn the passing of their beloved detective grandfathers Nic O’Connell and Ping Liu soon discover that their deaths were calculated murders.

Despite their mutual animosity, the granddaughters enter an uneasy partnership to solve the case.

Nic and Ping partake in a twisted game with old-timers, dodgy lawyers, corrupt politicians, shifty homicide detectives, capricious antique dealers, and an infamous Chinese gang.  As they unravel the truth, Nic and Ping find themselves in deadlier terrain.

So this low-budget film was written by Chris Johnson and directed by First-Time filmmaker Presley Paras. It’s also the first for producer Joe Smith of Silversmith Pictures. All right.

Although the film looks and feels very amateurish, I’m always happy to support filmmakers on their first attempt. Especially they make some mistakes in this movie, yet they actually have made a movie.

Something I admit I’ve never done. I had never seen Dralla Aierken or Freya Tingley in anything before, so I’m interested to see what else they can do.

They look like new young actresses, so I know their performances will improve each time.

Fun fact. Back in twenty eighteen, when production began for this movie, it was being called Year of the Detectives. But Bad Detectives is such a better name, don’t you think.

There are some red herrings in the movie and misdirection to try to confuse you as to who are the good guys and the bad guys? So I thought the unraveling of the mystery was a lot of fun. There’s a cute ending of the movie and I think overall they gave it a good attempt.

The things I didn’t like about this movie or that could have been handled better. First of all, the opening scene is just silly and bad and completely unnecessary.

I kept thinking it would be a foreshadowing of things to come in the movie or something bigger and better, but nothing really came out of it, really.

The camera itself lingers way too long on people and objects in many scenes throughout the entire movie. We’re never told really why the two females hate each other so much, just that they do.

A lot of the acting is just really bad. The only actor I recognized in the cast was Jim Meskimen. I’ve always really liked him and he does a great job in this role in this film.

Some of the lightings are really dark in scenes, dark enough that you can’t really see the actor’s faces. And they know there was probably some intention of offering some really clever shadowing effects, but it really just kind of made me squint like I want to see his face. I can’t see what’s happening.

And the color palette itself changes during the film from dusty, dark, and faded intentionally to realistic, bright, and modern. And so there was a disconnect in intentional color matching.

Some of the musical choices seemed odd at times to the resolution of the crime mystery didn’t really pack an emotional punch as it should have.

And Holly Martins, played by Caylee Cowan, looked like she came straight out of a film noir and didn’t fit this movie at all, although it was a cute scene.

This movie is rated R so it is not for kids and some adults. There’s violence, you see blood splatters and dead bodies, there’s profanity, crude phrases, and f-bombs usually out of the potty mouth of Tingley, that almost every single time there is alcohol and smoking.

Some themes that are positive that were introduced in the film are family loyalty, betrayal, trust, greed, and power.

Ultimately, the movie is not great. It’s a decent first attempt. And I know that with all of the attempts by the filmmakers and the actors, the performances will be better.

So I am going to give Bad Detectives Movie 2021 a C-Minus. 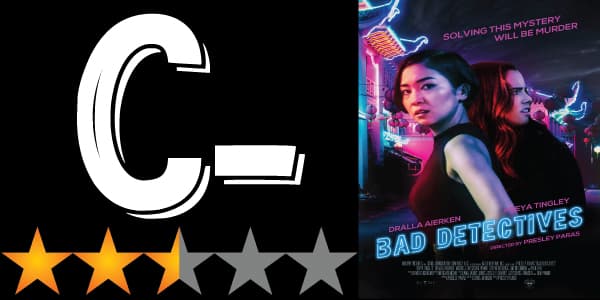 Guys thank you so much as always for reading the review of the Bad Detectives film. See you next time.