Awake 2021 is an American action, adventure, drama film, directed by Mark Raso. Let’s Check it out.

After a devastating global event wiped out all electronics and eliminated people’s ability to sleep, a former soldier may have found a solution with her daughter.

This is one of those movies you immediately think of like a quiet place, a bird box, this post-apocalyptic madness. But it almost feels like they stay with me on this because not a lot of people like this movie.

It almost feels like the happening because there’s this mysterious thing that’s happening to where everyone can’t go to sleep except for maybe one or two individuals.

And one of those individuals is Gina Rodriguez’s daughter in this film. So she is doing her best to keep her safe. But not only that, kind of prepare her for the future.

Because without sleep for so long, eventually, people will start to die. But before that, they slowly begin to lose their minds.

And once word gets out that there is a person or people that have the ability to sleep when no one else is able to sleep well, chaos ensues. It gets a little crazy.

This movie has a very interesting concept. And I won’t lie. The first five to ten minutes I was sitting there going, OK, awake kind of has me intrigued. I’m interested to see where they go. It starts out with a car crash.

It starts out really intense. And it had those thriller vibes that you want in a movie like this. And, you know, everybody’s brain is going to go to Birchbox because that’s kind of this Netflix genre launching point.

The postapocalyptic ask, or at least we’re getting there in this film type of film. And again, with this concept, you know, it’s going to take a lot to make it uninteresting.

Unfortunately, my problem with this movie is after the first will even say the first act, it just kind of stays level instead of amplifying that intensity and it ends up being uninteresting. At the end of the day.

A lot of that has to do with where we go in the third act and how it just kind of ends with little to no answers. And not that a film like this has to answer all of my questions.

I’m fine with being open-ended on a lot of these things, and I really appreciate the small-scale attempt. That’s what a quiet place brings us. We’re focused on. The family, we’re really not worried as much about how it all began and whatnot.

But in awake 2021 movie, not only do they not answer that question, but they don’t really give us any information outside of the here and now. And that even has to do with the backstories of these characters.

You know, we know a little bit about Jill thanks to the beginning of this film, but I didn’t personally know enough or learn enough to understand her mentality during certain situations.

You get it. She’s a mother trying to protect her daughter at all costs. And again, when people start to learn about this ability there after Mattilda absolutely.

And that’s the part that we get. But there are also some things about her past. She used to be addicted to drugs and she comes from a very interesting place and we get shades of that.

But we don’t get enough there and we really don’t get enough when it comes to her relationship with her kids, especially her son, to really impact us during those moments that could have otherwise been really nailing the emotion.

And that’s one thing I missed in this movie. Now, that’s not to say awake is all bad. Again, interesting concept. Gina Rodriguez is genuinely great here. She is compelling.

I would love to see her be the lead in more movies like this. She was great in a movie like Annihilations. So she’s been here before in this kind of film. But, man, I really, really dug her performance and honestly, her daughters as well.

Not every performance was great. There were some that were very lackluster, but those two were solid. Certain elements.

You know, when people I mean, myself included, I don’t get a lot of sleep. Well, I don’t really sleep that much. But when I don’t get the proper amount of sleep that I personally require, I can get a little bit cranky. Imagine going three, four, five days without sleep, being unable to sleep.

And so you can imagine people are beginning to lose their minds. Now, I will say our characters, our group here, will bring in someone or encounters something that just feels random and the implications never really carry over into the next scene.

One in particular, where they encounter a group of people as they’re driving down the road. It happens. It becomes a really overly violent scene.

And I’m OK with that because again. I was looking for that intensity, it was there during that moment, but then it just kind of ends and they never mention it again.

And I’m thinking, was that just there to give us a little bit of intensity? Because you understand that this story has really been struggling with that, or was there more of a purpose there that just wasn’t explained?

Either way, this is not a scene that meant as much as it could have meant and then the entirety of the third act. Well, it’s been long enough. People are really starting to lose their minds.

My favorite part was when someone thinks I think it was a pine cone was a grenade, and they just yeah, it gets a little weird.

But understandably, you know, people haven’t had their sleep, but everything that happens just kind of happens. And then the movie ends in a way that answers one question but never really provides us with anything else.

And we are left kind of scratching our heads going, OK, unless we do a sequel here, which I don’t know is going to happen. I don’t really think they did that much to give us a satisfying conclusion. The end for me was a big misfire.

And overall, Awake 2021 movie is a film that attempts to stand out. But the dull screenplay, unfortunately, gets in the way of the movie finding any success. 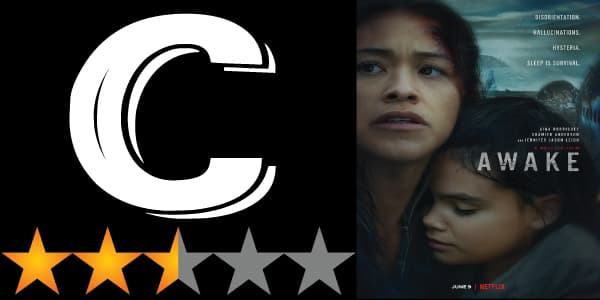 Awake 2021 is not a movie that fully delivered on a really interesting idea and an idea that we can all relate to because all of us have gone without sleep for a while. But just imagine going to the extent that they went to.

But again, when it comes to all of the apocalyptic questions that I have, I don’t really get my answers. So Awake is just one of those movies that didn’t quite provide me with everything I was looking for.

On June 9th, Awake drops on Netflix so check it out. And I would love to know your thoughts if you agree or disagree. All of that is welcome in the comments down below.

Guys thank you so much as always for reading the review of the new Netflix movie, Awake 2021.

Check out the trailer of the new  Action, Adventure, Drama film Awake 2021.