Here is the review of the new American Horror, Action, Adventure film by Zack Snyder Army of the Dead 2021.

A group of mercenaries takes the ultimate gamble, venturing into a zombie outbreak in Las Vegas to pull off the greatest heist ever attempted.

After seeing the first trailer for this film, I was immediately intrigued because it looked unlike any zombie movie we’ve ever seen before, with the neon lighting, ridiculous and over-the-top action, and almost a tongue in cheek like feel.

And I must say that the trailers sold this movie exactly how it actually is one hell of a good time that doesn’t take itself seriously at all.

Zack Snyder has created a film where there are no boundaries and no rules. He’s taken the zombie genre and said, what the hell, let’s do whatever we want with it.

And while that might upset purists of the genre, I found it to be so refreshing because truly all bets were off an army of the dead.

The film really takes its time to throw us into the zombie action as Dave Bautista as Scott gradually starts building his team for this impossible heist.

And when I say team, I mean 12. Yes, 12 different characters that Snyder has tested himself with for the audience to get to know, connect with and relate to among many other supporting players.

There’s a part of me that feels like this is going completely overboard because, with a smaller team, we would be able to actually get to know these characters more.

Luckily, Snyder has created some pretty memorable protagonists and antagonists to inhabit his world and gives us just enough character development for us to either root for or against them.

Dave Bautista proves that he is leading man material in the film, something that I have been sure of since I first saw him as director and Guardians of the Galaxy.

The former WWE alum is able to balance soft and hard, silly and serious, poised and flawed all at the same time.

Though he is considered the lead, many of the other characters get nearly as much screen time as Dave Bautista. My favorites of the bunch are Omari Hardwick as Vanderohe and Matthias Schweighöfer as Dieter, who create a sweet little bromance that is the root of most of the film’s most effective humor.

And that is good news for Netflix that these characters work because they are banking on Matthias Schweighöfer, who is directing and starring in a spinoff film titled Army of Thieves.

And Omari Hardwick will be joining Bautista and a few other of the cast members in an anime spinoff series titled Army of the Dead Las Vegas.

You could say that Netflix is putting a lot of eggs in one basket.

What works best about Army of the Dead, besides its likable cast of characters, is 100 percent the action and spectacle of the film.

And if you can see it in theaters, I absolutely recommend that because the scope of this movie is absolutely epic.

The desolate, apocalyptic landscape of the zombie-infested Vegas is a sight to behold. And when this film gets going and ramping up the action, I was on the edge of my seat, gasping and dropping my jaw throughout.

The creativity and ambition on display in this movie, in its visuals, its set pieces, and fantastic world-building is truly impressive.

But it also can be its downfall. There is a feeling an army of the dead, that because there are no rules and anything is possible that Snyder feels inclined to throw in everything, including the kitchen sink. And sometimes it’s just too much.

The movie is totally overloaded and excessive. Too many characters, too many illogical decisions, too many jokes and moments that don’t land too much random nonsense. Too many times the action is halted to throw in dialog-driven scenes that are painful to sit through. And the two and a half hour runtime is unnecessary as well.

As much as I am all for creative freedom, sometimes it’s important to have the ability to edit and the will to compromise. Basically what I’m saying is that Army of the Dead would have benefited greatly from Snyder being put on a bit of a leash.

So do I think that Army of the Dead is better than, or at least as good as Dawn of the Dead?

No, but that is like comparing apples and oranges.

The two are very different films and both are entertaining in their own distinct and unique ways.

What I can say is this, is that Snyder obviously has a real passion and I for the zombie genre and it shows in every frame of this film. 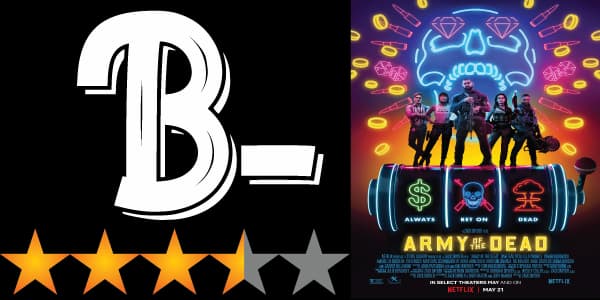 Zack Snyder has created a unique, singular vision of the zombie genre in this film that plays by no rules and has endless imagination on display.

Unfortunately, Army of the Dead is brought down at times by its own ambition, sheer overzealousness, and the fact it is bloated beyond belief. The entertainment value more than makes up for all of that, though.

Army of the Dead Release Date in Theaters May 14, 2021, and it will be streaming on Netflix Friday, May 21st. So check it out.

Guys thank you so much for reading the review of the new horror film Army of the Dead 2021.

Army of the Dead 2021 Movie Trailer

Check out the trailer of the new Horror, Action, Adventure film, Army of the Dead 2021.